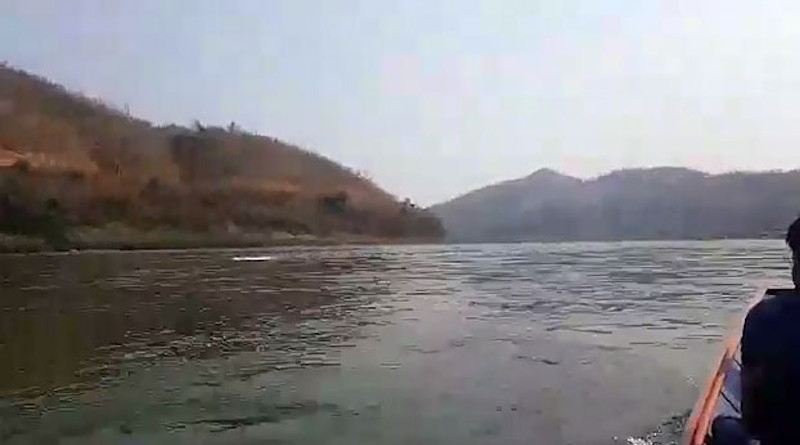 The Mekong river, showing the planned location of the Sanakham dam in Laos. Photo Credit: RFA

A dam planned for construction by Laos on the Mekong river will have negative impacts not only on Lao villages but also in nearby Thailand, a coalition of Thai environmental groups says, adding that the government in Bangkok should cancel plans to buy electricity from the controversial project.

The 684-megawatt Sanakham dam would be the country’s seventh large dam on the Mekong River, joining the currently operational Xayaburi and Don Sahong dams. In various stages of planning are four dams: Pak Beng, Pak Lay, Luang Prabang, and Phougnoi.

Transboundary impacts feared when the Sanakham dam goes into operation in 2028 include fluctuating water levels on the Mekong’s mainstream resulting in flooding and droughts, a reduction in fish stocks on the river, and the displacement of over a thousand villagers from their land, experts say.

The Thai government should now urgently review its agreements to buy power from the dam and cancel its support, 51 Thai organizations from the People’s Network of the Isaan Mekong Basin said in a joint statement following a May 29 teleconference.

“The Thai government should be concerned about the Mekong dams, and especially about the impacts [that we’ve seen] over the last few years,” Suwit Kulapwong – head of the Isaan Human Rights and Environmental Association and representative from the People’s Network – told the Lao Service of Radio Free Asia (RFA) this week. BenarNews is affiliated with RFA.

“I think the government should take action against the dam now,” Suwit said, noting that the dam would be built in Vientiane province’s Sanakham district, “only two kilometers from the northeastern Thai border in Loei province.”

“I think that the Thai government should take a close look at the Sanakham dam, because it’s so close to the Thai border,” agreed Montri Chanthawong of the Mekong Butterfly environmental group.

“It’s only two to three kilometers away. And when the dam closes or opens, the water level will go up or down from four to five meters, and this will affect an area with a 100-kilometer radius all the way down to the Chiang Khan and Pakchom districts,” he said.

Participation in impact studies on Mekong dams should be opened more widely to the residents of affected areas on both sides of the border, a member of the Love Chiang Khan Group, an environmental organization in Thailand’s Loei province, urged.

“Local people from both the Lao and the Thai sides should be allowed to take part in a real environmental, cultural, and social impact assessment, and in a real discussion about their concerns,” he said.

Concerns in both countries

Villagers on both sides of the border, meanwhile, voiced fears over the likely impact of the dam’s construction in their area, with one Thai riverbank farmer saying that losses from the dam’s operations will outweigh the benefits.

“The dam will destroy the ecosystem. It shouldn’t be built,” he said.

“We can’t oppose this project,” added a villager in Sanakham district, on the Lao side of the border. “If the district or the government has decided to build the dam, we can’t do anything about it.”

“But if the Thais oppose it, it might not be built,” he said.

An Environmental Social Impact Assessment of the Sanakham dam project prepared by the dam’s builder, the Datang Sanakham Hydropower Company, a subsidiary of China’s Datang International Power Generation Company Ltd., states that 20,000 Lao and Thai villagers will be affected by the operation of the dam, which is set to begin construction later this year.

In addition, 1,127 people in three Lao villages will be displaced, with flooding foreseen on land belonging to 1,808 residents of three districts in Vientiane province and Xayaburi province.

Though most of the electricity eventually generated by the Sanakham dam will be exported to Thailand, Thailand itself may not need the extra power, the Save the Mekong Coalition said in a June 2 statement.

“Thailand has a major over-supply of electricity, which has increased even more due to the economic fall-out from the COVID-19 pandemic,” Save the Mekong said.

“The COVID-19 pandemic has also highlighted the importance of the Mekong’s farmlands, forests, rivers, wetlands and fisheries as a safety net during times of crisis. Local people’s continued access to rivers and natural resources are critical to ensuring a more healthy and equitable recovery from the pandemic.”

Laos has built dozens of hydropower dams on the Mekong and its tributaries in its quest to become “the battery of Southeast Asia,” exporting the electricity they generate to other countries in the region, and is preparing to build scores more dams in the years ahead.

Though the Lao government sees power generation as a way to boost the country’s economy, the projects are controversial because of their environmental impact, displacement of villagers, and questionable financial arrangements.