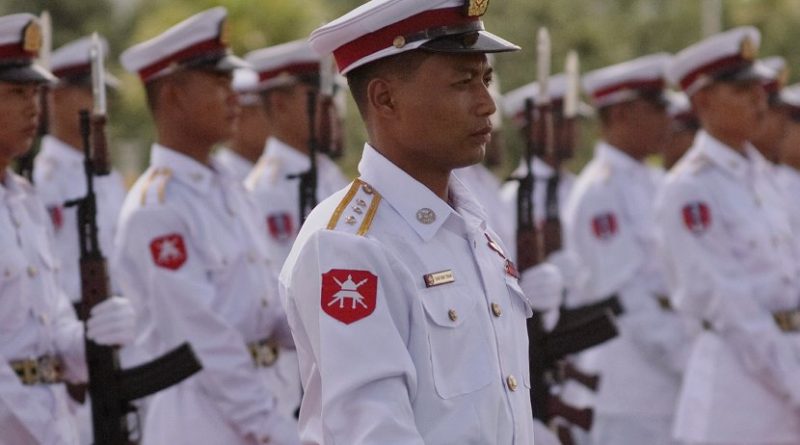 Since 2012 the United States, followed by Australia, has extended military assistance and relaxed restrictions on defence cooperation to Myanmar. Then Secretary of Defence Leon Panetta announced that the US would extend military assistance to Myanmar if the leadership continued to implement democratic reforms and improve human rights conditions. Within a year the then Australian prime minister Julia Gillard announced a relaxation of restrictions on defence co-operation with Myanmar in recognition of its “critical reforms”. Australia wanted to encourage the development of a modern, professional defence force in Myanmar which continued to support democratisation and reform, she said.

To date, this has meant Myanmar sending observers to the annual Cobra Gold exercise involving American and Thai forces. This decision to extend to Myanmar what is commonly referred to as Building Partner Capacity (BPC) is part of a larger effort to help promote its evolution toward a more professional force under civilian control.   However some caution is called for by Washington in regard to the amount of BPC funds it invests. As a recent RAND report Building Partner Capacity: What Works Best and Under What Circumstances noted, BPC efforts tend to be most effective with countries that share US security interests, have high governance indicators, a strong and growing economy, and are willing to invest their own funds to sustain capacity-building.  US BPC areas have included border security, counter-insurgency, counter-narcotics, coalition operations, maritime security, and defence institution building. The US had halted all co-operation with Myanmar’s military in the 1990s because of its bad human rights record, but has recently been lifting sanctions in response to democratic reforms in the country. Some Australian scholars have argued that careful engagement and training by countries like Australia can expose the Myanmar armed forces to international norms and promote new ways of thinking.

It is certainly true that greater BPC engagement can itself help improve bilateral relationships. However, it is arguable that unless overall changes in Myanmar’s governance continue and are sustained, then US and Australian BPC efforts will not be as effective. As the historical record shows, a political leadership has to want to change for those efforts to bear fruit.

While more western BPC funding would certainly have positive results, and indeed economic and military assistance might help bring about long-term change, still development, investment, and training should be specified, targeted, and afforded based on specific and incremental goals. For example, Australia and the US could first provide military education and training on the rules of engagement and conduct – and wait to see tangible results of such training – before deciding on further military cooperation. That is what happened with Indonesia.   In 1999 the US Congress terminated most of its military assistance funding to Indonesia after its military committed human rights abuses in East Timor. Funding resumed in 2002, with US assistance focusing heavily on strengthening Indonesia’s capacities to combat regional and international terrorism. Assistance went towards enhancing professionalism, increasing exposure to US norms of civil-military relations, defence budget formulation, military reform and respect for international standards of human rights.   In Myanmar this will mean the leadership will have to make serious efforts to address the human rights abuses still being committed by the Tatmadaw. One example of alleged human rights abuses is the Myanmar Army’s systematic use of rape against ethnic women in the border areas as an instrument of war. Numerous reports produced by local organisations such as the Karen Women’s Organisation (KWO), Shan Women’s Action Network (SWAN), and the Kachin Women’s Association of Thailand (KWAT), as well as the United Nations and international non-government organisations, detail the widespread sexual violence in militarised areas.

A recent report in September last year, “State Terror in the Kachin Hills”, by the Kachin Women’s Association of Thailand (KWAT) details the experiences of 26 civilians, including women and children, who suffered from alleged abuse by the Myanmar military since last September. KWAT has also reported at least 64 cases of rape and sexual assault in Kachin State.   According to the reports many of these crimes are allegedly being committed by senior military officers. Even though Myanmar is a signatory to the 1949 Geneva Convention, there are no indications the government has taken any initiatives to enforce international humanitarian laws amongst its army. Indeed there are very few known cases of military personnel being punished for such acts.   Although it is in Washington’s and Canberra’s interests to develop a positive relationship with the national government and promote democratic reform, military assistance and BPC funding have to be contingent on meeting certain benchmarks in civil-military relations, military professionalism, addressing human rights violations, and overall democratic governance in Myanmar.  Reforms might include creating a strong civilian police force that could pose a counter-balance to the internal security function of the military; removing military officers from key posts within government and ensuring that civilians are democratically elected into power; and liquidating socio-political compartments and functions within military structures. Another measure might include a clear delineation of security roles between standing armed forces, police, and other units. This would include placing the military under the authority of a civilian-led ministry of defence.  Yet another would be to place limits on the number and geographic scope of the Tatmadaw near ethnic villages. On a broader societal level, there could be policies to ensure that the ethnic populations of Myanmar are duly represented in parliament. In April this year, the Union Solidarity and Development Party had even voted against a proposal to form a ministry of ethnic affairs. Military reforms should, after all, be a reflection of broader democratic transformations within a society.

*Christine M. Leah is currently a Visiting Research Fellow with the Military Transformations Programme at the S. Rajaratnam School of International Studies (RSIS), Nanyang Technological University and is a guest contributor to Karen News.

Home » Military Assistance To Myanmar: A Need For Balance – Analysis