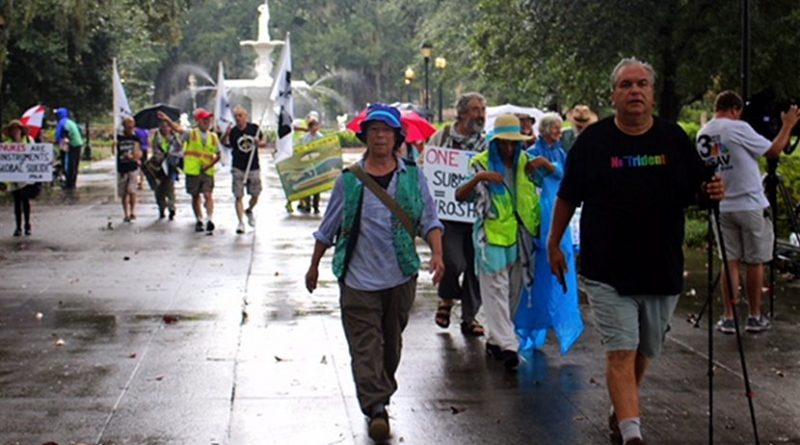 On 8 am Tuesday, approximately 20 peacemakers from around the country began an 11-day, 110-mile walk from Forsyth Park in Savannah, Georgia down the length of Georgia’s Atlantic coast to the Kings Bay Naval Base, a home to the United States’ nuclear-armed Trident Submarine fleet. Named “Disarm Trident: Savannah to Kings Bay Peace Walk,” the walk is a call to abolish nuclear weapons globally.

It is inspired by, and in support of, the dramatic political action at the Kings Bay base on April 4 that led to the arrest of seven Catholic activists. The activists, the “Kings Bay Plowshares,” conducted the latest in over a hundred so-called Plowshares actions undertaken worldwide since 1980, following the Book of Isaiah’s call to “beat swords into plowshares.” The seven hung banners, hammered on a Trident missile monument, poured blood on the base logo, delivered an indictment, and used crime scene tape at three sites on base. This was all meant as a symbolic statement of moral resistance to the nuclear weapons on the Trident submarines which have the power to end all life on this planet.

The Kings Bay naval base is home to six of the fourteen nuclear-armed Trident submarines in the U.S. arsenal. One submarine carries twenty missiles, each of which have multiple warheads, amounting to an explosive power per submarine that is thousands of times greater than the single bomb dropped on Hiroshima. Local activists supporting the walk have long protested threats posed by the Kings Bay Trident fleet to the habitat and calving grounds for endangered right whales.

Kathy Kelly, one of the organizers of the walk, said, “We will walk in nonviolence and prayer with the hope of bending the moral arc of the world towards justice and peace.”