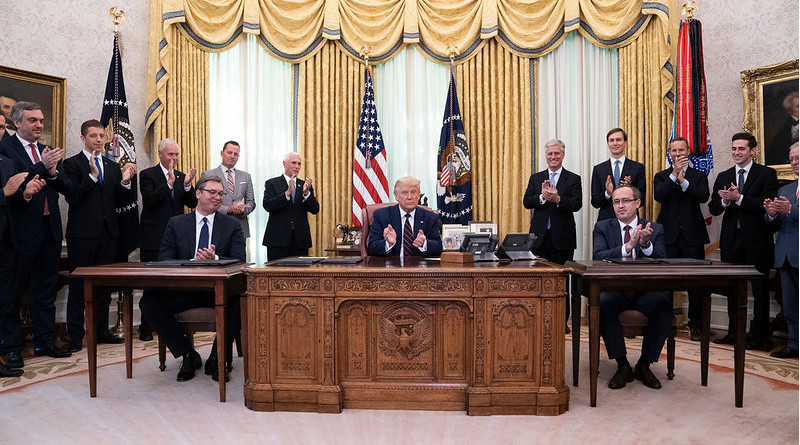 Reached after two days of talks, the document also included plans for Israel and Kosovo to establish diplomatic relations and for Belgrade to move its Israeli embassy to Jerusalem.

President Donald Trump who also signed the document at the White House ceremony, called the agreement “historic,” adding that “after a violent and tragic history and years of failed negotiations, my administration proposed a new way of bridging the divide.”

“By focusing on job creation and economic growth, the two countries were able to reach a major breakthrough,” Trump said.

“Of course, speaking about politics, we haven’t resolved our problems. There are still a lot of differences between us, but this is a huge step forward,” Vucic said.

“And I’m once again profoundly grateful to you [Trump] and to your people that you successfully got us here. And we didn’t speak about many items that we signed today but for us it’s very important that we are going to have a unified economic zone in an entire Western Balkans which will bring us to the real economic results for the benefit and for the sake of all our people,” Vucic added.

Hoti said the agreement was a “great achievement.”

“I think, absolutely this is a great moment for Kosovo and for the region. I think we’ve made a huge step forward toward full normalization of relations that should lead eventually to mutual recognition between the two countries,” Hoti said.

“We are fully committed to work together to improve people’s lives, to create new jobs in the region. And we fully believe in your [Trump’s] administration. We share the same values of freedom, democracy and open market economy. So, we are looking forward to start implementing this agreement as soon as possible,” Hoti said.

Trump’s national security adviser, Robert O’Brien, who co-hosted the talks at the White House along with Richard Grenell, Trump’s special envoy for the peace talks between Kosovo and Serbia, struck an optimistic tone for the countries’ way forward.

“I think today is about normalization of economic ties. And it’s really a fantastic step for the two peoples have taken, both Kosovo and Serbia. It’s taken a lot of effort. I think that’s a first step,” O’Brien said.

Grenell said that it remains to be seen “if the concentration on economics and job creation can ‘unstick’ the political claims by both sides.

“I think one of the great parts of this agreement is over the next year, we have a freeze on the recognition and derecognition campaigns. That means over this next year, we can see job growth and job creation really take hold in the region. And then a year from now, judge us on where the political process goes,” Grenell said.

Former Vice President Joe Biden, Trump’s rival in the U.S. presidential election, responded to a question from VOA about the agreement by saying that “normalization of relations among countries is a … by and large, and almost every instance a good thing,” stressing that “Kosovo should be an independent country. Not a part of Serbia.”

The U.S. effort to get Kosovo and Serbia to agree to cooperate on a range of economic fronts to attract investment and create jobs has been led by Grenell, who has called the economic approach “flipping the script,” and has focused on incentivizing the two countries’ citizens, especially youth.

Grenell Friday gave credit to Trump for a “creative” approach and stressed that the deal could not have been reached by Washington insiders who have been stuck for years.

“I’m telling you that the only way that this agreement could have happened is from an outsider,” Grenell said at a press briefing with O’Brien and Trump’s senior adviser and son-in-law, Jared Kushner.

The deal includes rail and transit agreements, including one that would clear the way for the first flight between Pristina and Belgrade, the two countries’ capitals, in 21 years.

On Monday, Hoti and Vucic are scheduled to go for talks to Brussels, where the European Union has been mediating the talks between Kosovo and Serbia for over a decade.

U.S. officials have been in close touch with EU officials on the issue of normalizing economic relations between Serbia and Kosovo, Grenell said Friday.

The White House talks were not without surprises. While the White House had said the talks would be about economic issues, on Thursday, after the first morning session of the talks a Serbian delegation member, Finance Minister Sinisa Mali, said that they were presented with a document that included “mutual recognition” between the countries.

At the end of the first day of talks, Vucic confirmed what Mali had said, responding to a question by the VOA Serbian. “If you asked me whether Serbia will accept mutual recognition, which was mentioned at some draft proposals, it won’t work for Serbia,” he said.

The signed documents did not include a “mutual recognition” clause.

Grenell told Newsmax Friday that there had been some surprises at the talks but that neither “side was that surprised”.

“Surprises are good. They press the sides to do more. We had some surprises, but I don’t think either side was that surprised. They like to pretend before the media that they are more surprised than they actually are,” he said.

At the heart of the dispute between the former foes, is Serbia’s refusal to recognize Kosovo’s independence, which it declared unilaterally in 2008.

Most Western nations – including the United States – have recognized Kosovo. Russia and China have not.

Vucic and Hoti’s Washington comments on the subject show a difficult road is ahead.

Hoti said he sees the economic agreement as one step toward recognition.

“We see this as a big step towards final resolution, which is mutual recognition. I have stated publicly, that for us this indicates a big achievement towards finalization of an agreement with Serbia,” he told VOA.

However, Vucic said after the signing that the pact is a bilateral agreement with the United States, rather than Kosovo, aiming to fend off criticism at home that an agreement with its former province would be interpreted as recognizing it.

Damon Wilson, a vice president of the Atlantic Council said the political issues “cannot be buried.”

“Ultimately what we are talking about is a comprehensive resolution, a settlement that provides for normalization,” he told VOA Albanian this week.

The announcement appears to provide Trump with a diplomatic victory ahead of the November presidential election.

“This meeting has become by now a part of Trump’s electoral campaign, with the White House looking for a foreign policy accomplishment that will produce an event and a photo opportunity for President Trump as a peace broker,” said Majda Ruge, a fellow with Johns Hopkins School of Advanced International Studies and with the European Council for Foreign Relations

Wilson though, said Kosovo and Serbia are not exactly front-page news in the United States.

“It’s not exactly the leading issue for vote-getters across our country, and it is not likely to really factor too much into electoral calculations in that sense,” he said.

While it is early to say how a change in the White House would affect this issue, Democratic and Republican administrations’ policy towards the Balkans have usually had a “sense of continuity,” Wilson said.

“We want to see that there is a bipartisan commitment to U.S. engagement in the Western Balkans and that’s something that we want to nurture and sustain,” he said.