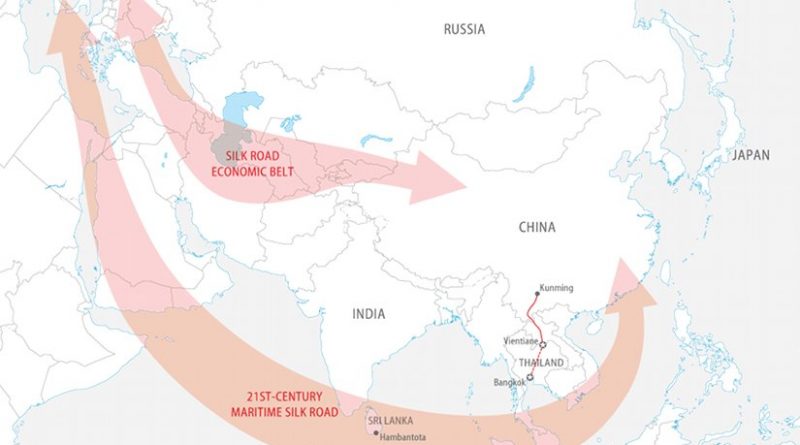 (FPRI) — Under its Silk Road Economic Belt and the 21st-Century Maritime Silk Road (commonly known as the “One Belt, One Road” initiative) China has sought to build a network of infrastructure projects across Eurasia to encourage trade.  At first glance, it seems that all those involved should benefit.  Chinese loans would kick start the construction of the infrastructure projects.  Developing countries, in which the projects are built, would profit as transshipment points and from the development of new industries that could plug into international supply chains.  Revenues from the resultant economic growth would then repay the Chinese loans, with interest.

That all sounds rosy.  That is, if the new infrastructure network is used.  The mere existence of roads and ports does not ensure that trade will flourish.  Certainly economic growth at either end of the network would help.  But at the moment the economies of both China and Europe are slowing.  Indeed, global economic activity is slowing.  If there is not enough trade to make the new infrastructure profitable, then the benefits from the “One Belt, One Road” initiative only flows in one direction: China.

The operative word in the “One Belt, One Road” initiative’s financing is “loans.”  Chinese loans may have laxer requirements and carry a lower interest rate than those of commercial banks.  But they are loans.  China expects them to be repaid.  Plus, Chinese loans for infrastructure projects are often made with the understanding that the developing countries award construction contracts to Chinese companies.  In short, China benefits from both the financing and construction of infrastructure projects, while developing countries must bear all of the financial risk.  When trade is booming, that may not matter much.  But when it is not, that should be a concern.

In the past, many developing countries became heavily indebted as a result of infrastructure projects that fizzled.  Lenders ultimately had to forgive many of their debts, recognizing that their borrowers could never repay them.  China has forgiven some of its loans to developing countries too, about $3.9 billion in all.  But that is a small fraction of the total debts that developing countries owe it.  For example, in 2015 China cancelled $40 million in debt from Zimbabwe.  But Zimbabwe still owes China over $1 billion.  Moreover, at the time of China’s modest debt cancellation, Zimbabwe pledged that it would increase its use of the Chinese yuan in its foreign exchange reserves.[1]  To outside observers, it seemed that China had used its debt cancellation to achieve its larger foreign policy goals.

Still, several developing counties have welcomed Chinese financing.  Sri Lanka’s former President Mahinda Rajapaksa happily accepted Chinese loans to build a new port facility and airport at Hambantota.  When completed, the port facility will be the largest of its kind in South Asia.  But with slowing seaborne trade, Sri Lanka’s new government has been left with the burden of servicing the country’s $1.1 billion debt to China.  Despite the new government’s criticism of Rajapaksa’s acceptance of Chinese loans and the shortcomings of Chinese construction work, it had little choice but to finish the port and airport, lest it default on the country’s loans.  Indeed, China may believe that borrowers will be forced to repay their loans, because an outright default would severely curtail any developing country’s future access to credit.

Lately, however, some Asian countries have been playing harder to get with China.  That was the case with Indonesia last year.  When a Chinese-led consortium sought a contract to build a high-speed railway between Jakarta and Bandung, Indonesia leveraged the consortium’s eagerness to beat a Japanese-led rival to win a major concession: the consortium would drop its requirement for the Indonesian government to backstop China’s loans.  The consortium won the contract in the end.  But Indonesia offloaded the project’s financial risk onto China.

Thailand has been cautious too.  For years, China has talked about the construction of a long-distance, high-speed railway between Kunming and Bangkok.  After Thailand’s military coup in 2014, the two countries accelerated their talks over such a railway, as they developed closer ties.  But the terms that China offered disappointed Thai leaders.  They balked at China’s desired interest rate, its proposed ownership structure, and its request for development rights along the railway’s right of way.  So, Thailand shelved the project’s original plan.  Instead, it financed its own construction of a much shorter railway from Bangkok to Nakhon Ratchasima, only 250 km away.  While China would still supply the technology and oversee procurement, Thailand would use Thai construction companies to build the railway, not Chinese ones.

The two railway cases are telling.  China may believe that the thirst for low-interest loans in developing countries should make its “One Belt, One Road” initiative an easy sell.  But the leaders of those countries, at least those among them who are observant, know that China’s domestic economy is slowing and that China is increasingly concerned about keeping its construction companies working.  They also know what happened in places like Sri Lanka, Indonesia, and Thailand.  That knowledge gives them leverage to negotiate better terms from China.  If more developing countries do so, China’s “One Belt, One Road” initiative will be quite a bit tougher to realize.

Home » Who Benefits From China’s ‘One Belt, One Road’ Initiative? – Analysis

One thought on “Who Benefits From China’s ‘One Belt, One Road’ Initiative? – Analysis”