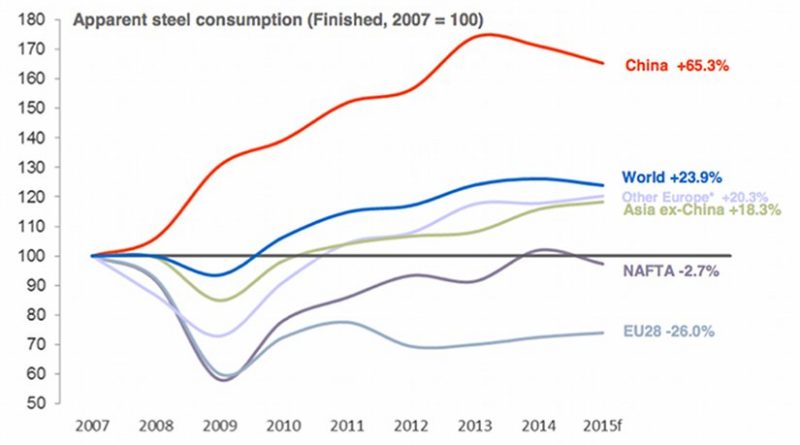 ArcelorMittal Europe announced Friday its results for the third quarter ending September 30, 2015 and noted while Ebitda for the quarter was €496 million, the segment recorded an operating loss of €23 million, compared with an operating profit of €125 million for Third Quarter 2014.

According to ArcelorMittal Europe, record levels of imports, particularly from China and the CIS, have placed significant downward pressure on European steel prices. As a result, the segment’s operating profit for the third quarter was negatively impacted by a €256 million exceptional charge related to the write-down of inventory following the rapid decline of international steel prices.

ArcelorMittal Europe said sales also decreased by -5.7 per cent to €6.9 billion this quarter, from €7.3 billion in the corresponding quarter last year, as a result of lower average selling prices and marginally lower steel shipments. Steel shipments in the third quarter decreased by -1.9 per cent to 9.6 million tonnes, compared with Third Quarter 2014.

Commenting on the results, Aditya Mittal, CEO ArcelorMittal Europe, said, “Record, and still rising, levels of imports are materially impacting steel prices. Certain EU anti-dumping investigations are underway, but the process is slow and needs to be more efficient in order to effectively and fairly protect European steel producers from unfair trade. The ongoing price deterioration has led us to book a €256 million exceptional charge for the quarter, meaning we have reported an operating loss for the first time in seven quarters.”

Mittal added that the, “Outlook for European steel demand remains positive, and we forecast apparent steel consumption in 2016 at similar levels to the +2 per cent we have seen for this year. However, given imports into the European market are forecast to remain at high levels, we anticipate pricing pressure to continue into 2016, which will make it challenging for European steelmakers to benefit from the ongoing demand recovery.”

ArcelorMittal Europe said that the European economy is on course for a continued gradual acceleration in 2016, supported by monetary stimulus, a competitive euro, falling commodity prices, and pent-up demand. Consumers are benefiting from low inflation and a steady recovery in employment. Better profitability, improved credit conditions and rising capacity utilisation, should help the modest investment recovery gain some momentum in 2016.