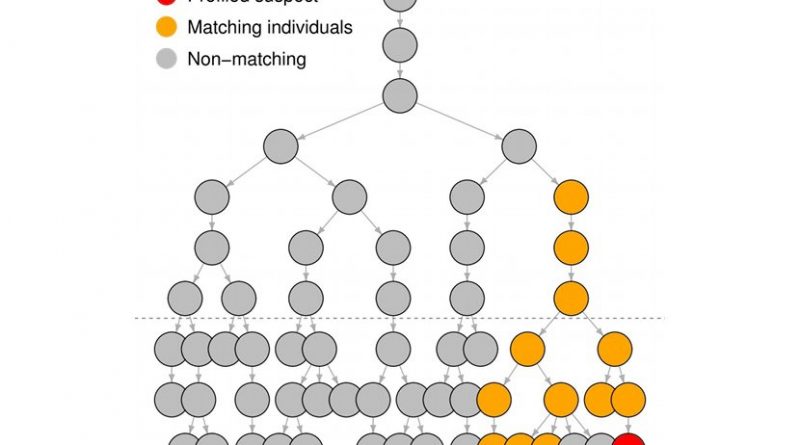 A simplified illustration of a simulated population of males, with lines indicating father-son links. The suspected source of the DNA, whose profile matches that from the crime scene, is shown in red and other males with matching Y profiles, who are often close relatives, are yellow. The dashed line separates the last three generations, those further back in time will typically be already dead or otherwise unlikely to be of interest (depending on the circumstances of the crime). Credit: Mikkel Andersen

David Balding of the University of Melbourne, Australia and Mikkel Andersen of Aalborg University in Denmark have developed new, open-source software that can help understand how many people in a population will match a single Y-chromosome profile detected at a crime scene, which they describe in a new study in PLOS Genetics.

Forensic analysis of Y-chromosome DNA is especially useful when a small amount of male DNA is mixed in with a large amount of female DNA, such as occurs in sexual assault cases. Explaining this evidence in court, however, is difficult because the Y chromosome passes down mostly unchanged from fathers to sons, so a single Y-chromosome profile can be shared by dozens of men in a population.

Instead of a match probability or database count, Balding and Andersen propose that courts be told about the likely number of matching males in the population, and the possible consequences of their relatedness, which is often more distant than uncle or cousin but much closer than for a random man.

They also show how the distribution of matching males can be affected by database information, and suggest ways to present this information in court to make clear that Y-chromosome evidence cannot definitively identify the culprit, but can dramatically reduce the number of possible sources of the DNA. The court must then decide if it has enough other evidence to identify the suspect as the source of the Y-chromosome profile, rather than one of his matching (distant) relatives.

After the introduction of DNA profiling using non-sex chromosomes, the procedure had problems that, once addressed, made profiling a powerful tool that has revolutionized forensic science. Now, Y chromosome profiling must undergo the same process to quantify the results in a way that is valid and directly interpretable to courts. The new software presented in this study could be used to improve the accuracy of Y chromosome evidence and to increase its understanding by judges and jurors.

David Balding added: “We think this work is going to make a big improvement to how Y profile evidence is presented in courts. We will soon extend this work to mixtures of Y-chromosome profiles from multiple males, and also address the corresponding problem for the maternally-inherited mtDNA profiles. Our approach also allows us to include information from any relatives of the suspect whose profile is already available, and we will be working to develop that aspect.”

Home » How Convincing Is Y-Chromosome Profile Match Between Suspect And Crime Scene?