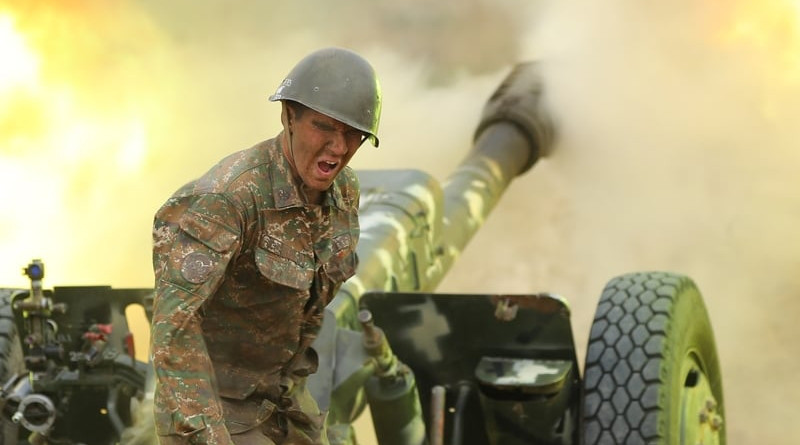 By Paul Goble and The Jamestown Foundation

Though Iran professes neutrality in the Armenian-Azerbaijani conflict, calls for an immediate ceasefire, and offers to mediate between the warring sides (see EDM, October 21), Tehran’s political elite is sharply split on how to respond to the fighting in the South Caucasus. Their diverging approaches are driven by both foreign and domestic considerations. On the one hand, Iran is deeply worried about the growing influence of Turkey and Israel, two of its traditional foes in the region. And on the other hand, it is concerned that Azerbaijan’s advance may lead some of the around 20 million ethnic Azerbaijanis in Iran to shift their loyalties away from Tehran and toward Baku. For now, this is an unlikely development to be sure. But it is one that, nonetheless, inspires fear within the Iranian government and lies behind much of what the Islamic Republic has been doing amidst the fighting on its northwestern border.

“Officially,” Nikita Smagin of the Moscow-based Russian Council of International Affairs writes, “Tehran recognizes the territorial integrity of Azerbaijan; but in reality, each new sharpening of the Armenian-Azerbaijani conflict shows that Iran wants only one thing—that the conflict around Nagorno-Karabakh not enter a sharper phase” and thus pull in outside powers, including, quite possibly, itself (Profile.ru, October 28). The Iranian government is not ready to “choose sides,” the expert says; but it finds itself pushed and pulled in various directions, with these motivations increasingly exacerbated by domestic concerns.

Iran has had good relations with Armenia since the latter acquired independence in 1991. The ethnic-Armenian minority in Iran is small—only about 150,000—and has given no signs of interest in pursuit of autonomy or closer ties with Yerevan. The country’s ties with Azerbaijan, in contrast, have reflected “mutual phobias,” Smagin says. Baku, proud of its secular state, has feared the spread of Islamic influence from Iran given that more than two-thirds of Azerbaijanis north of the Arax River are Shiites, like most of the population in Iran. And Tehran has always been nervous about the personal loyalties of the millions of ethnic Azerbaijanis inside Iran (Profile.ru, October 28). Those fears have only been exacerbated in recent weeks by the response of Azerbaijani-Iranians to Baku’s military victories (see EDM, October 22).

But other factors have worked in opposite directions. Economically, Azerbaijan is “more important than Armenia” for Iran. However, Armenia’s shared border with Iran in the Zengezur corridor, along with Russia’s use of that passageway to supply its own military base at Gyumri and Armenian forces more generally, makes maintaining good relations with Yerevan critically important. Talk about an Azerbaijani advance to link Azerbaijan proper with Nakhchivan has raised serious concerns among Iranians for that reason (Nezavisimaya Gazeta, October 8, 2020; see EDM, July 10, 2018).

What makes the current situation especially problematic for Tehran, however, lies within Iran. The Azerbaijanis of Iran historically have identified with their country of residence; but in the last month, more of them have expressed support for Baku and made demands that Iran stop allowing Russia to use its territory to supply Armenia with weapons. Such demands have surfaced in demonstrations both in the northern part of Iran adjoining Iran and in Tehran (see EDM, October 22, 2020). And as Smagin points out, these rallies have frightened the Iranian government because such demands represent a direct criticism of Tehran (Profile.ru, October 28).

When Iran’s Azerbaijanis produced photographs two weeks ago showing that Tehran was continuing to allow Russia to supply Armenia with weaponry via Iran even after the new fighting intensified, this criticism intensified. But instead of resorting to repressive police powers, Tehran had four official representatives of the Spiritual Leader of Iran visit the north and stress that, in their view, and, by implication, the that of the entire Iranian establishment, “Nagorno-Karabakh is part of Azerbaijan,” and that Baku has every right under Islamic law to seek to liberate occupied territories. One of their number, Smagin reports, even said he was ready to support the dispatch of Iran’s Azerbaijanis to help with the fighting. The spiritual authorities publicly took this stance even though some Azerbaijani shells have accidentally landed on Iranian soil (wounding some Iranians) and even though Iran has shot down a number of Azerbaijani drones that had strayed over the border, the Russian analyst continues (Profile.ru, October 28).

Further complicating the situation for Iran are three broader foreign policy factors: Israel’s involvement in the conflict by its supply of these drones and other weapons to Azerbaijan, the rumored (still largely unsubstantiated) participation of militants from Syria in the fighting, and the expansion of Turkey’s influence across the Caucasus because of its links with Azerbaijan. All three of these developments have sounded alarm bells in Tehran because Israel and Turkey are traditional enemies of Iran and because the alleged fighters from Syria were purportedly among those who opposed Iranian-backed groups there and could be redirected at the end of the fighting toward Iran.

The Islamic Republic, thus, has compelling reasons to act, but it is being pushed in several, at times contradictory, directions. It wants Azerbaijan to succeed but not too much; and it would like to see Armenia withdraw from the occupied territories but not so precipitously that this would echo inside of Iran. Tehran hopes to use this conflict to join talks about the future of the South Caucasus, overcoming the success Western governments have had in keeping it out of the Minsk Group (Karabakh conflict resolution format) up to now. And it wants to prevent the expansion of Turkish and Israeli influence in the Caucasus.

What all these various interests mean is that Tehran may find itself either driven in one of two directions. It may default to inaction lest it provoke regional developments that it does not want to see. Or it might decide to adopt a more assertive policy—one that could involve supporting one side or the other far more than in the past—lest Iran find itself among the chief losers of the latest fighting between its two northern neighbors.

Source: This article was published by the Jamestown Foundation in Eurasia Daily Monitor Volume: 17 Issue: 157