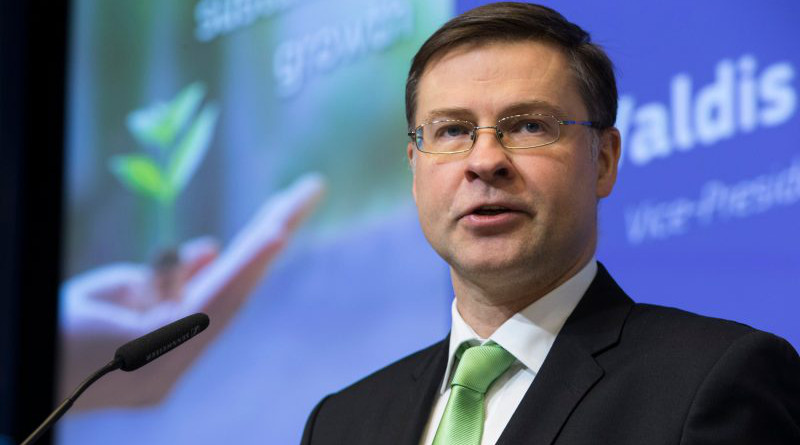 (EurActiv) — The European Commission launched on Wednesday (6 February) a consultation with member states, the European Parliament and other stakeholders to review the EU’s fiscal rules, the Stability and Growth Pact.

The review comes as part of a multi-front effort to channel billions of euros into making the European economy more sustainable and achieving the zero-emission goal by 2050.

The aim is to simplify a set of rules considered “too complex” and based on “non-observable” indicators, said Commission vice-president Valdis Dombrovskis.

As part of the review, Dombrovskis said, the inclusion of a so-called ‘golden rule’ to support the ‘green’ investments will be part of the debate.

The consideration of this golden rule came on top of a series of initiatives and proposals by EU institutions to mobilise billions of funds to make the European economy more sustainable.

But the bloc is also preparing a review of the state aid rules and the inclusion of a “green supporting factor” in the capital requirements for banks, and has adopted a new taxonomy to better channel funds to sustainable goals.

In addition, the European Investment Bank, the largest development bank in the world turned into a “climate” bank, and the European Central Bank want to factor in the climate angle in its price stability mandate.

European Green Deal. the European Commission aims to mobilise at least €1 trillion to become the first zero-emission region by 2050. Around half of the funds will come from the EU budget, at least €300 billion from national contributions, while the private sector would contribute the rest.

An important pillar of the package is the Just Transition Mechanism of €100 billion to support the transition of regions with a large number of workers in coal, peat mining or shale oil and gas.

The “golden rule”. Last autumn, the European Fiscal Board proposed that member states could voluntarily top up expenditure on EU projects co-financed by them beyond their national commitments. This additional investment in ‘green’ projects could then be deducted from the calculation of the deficit.

The “golden rule” is supported by Eurogroup president Mario Centeno, by member states including Italy and Spain, and by the Commissioner for Economy, Paolo Gentiloni, EU sources said.

However, a strong group of 14 member states are against it and Dombrovskis himself is not very enthusiastic about it either, an EU official explained. Critics said the current rules already provide enough flexibility for ‘green’ investment, and member states should better organise their budgetary priorities.

New capital requirements. The European Banking Authority is assessing whether the capital required for banks to deal with potential risks could be lowered when they provide credit and loans to sustainable-related projects. This beneficial regulatory treatment would incentivise credits to “green” causes.

In this case, Dombrovskis is in the camp of the defenders of the “green supporting factor”, while the EBA chief. Jose Manuel Campa, already questioned its merits.

In an interview with EURACTIV, the latter said the assessment of risks has to be evidence-based. “We’re not going to get to a green economy if in the process we end up encouraging banks to be insolvent, and get into another financial crisis,” he said.

State aid rules. The Commission also started a review of its state aid rules last year to see if they are aligned with the ‘green’ priority, which could open the gates to public support for sustainable projects.

Executive vice-president for Competition, Margrethe Vestager, said in late January that there will be “new rules in place by the end of next year” on public aid for energy and the environment, and for subsidies to the European regions that need support.

The review will also include rules covering public aid for R+D and innovation; for risk finance to support growing businesses, and for important projects of common European interest. And it will also look into the general block exemption rules, which spell out in which cases governments can provide funds without Commission approval.

The taxonomy. EU institution sealed a deal in one and a half year on the definition and criteria that will be used to determine what is ‘green’. This common labelling will help to channel billions of euros from the private sector, but also from the EIB and the ECB, to projects supporting the sustainable transition.

Nuclear and gas were the bone of contention, and the compromise left these sources in limbo: neither ‘green’ nor excluded.

The European Securities and Markets Authority, the EU’s financial markets regulator, also put forward a new sustainable finance strategy. It will bring more transparency to financial players and will improve the assessment of climate risks, helping to channel more private capital to the Environmental, Social and Governance (ESG) goals.

ECB’s new “mission-critical”. The president of the all-powerful ECB, Christine Lagarde, described the fight against climate change as “mission-critical” for the institution. As part of the strategic review the bank is conducting, Lagarde said climate risks “must be factored in”, given the impact of the environment on price stability, consumption and financial stability.

The ECB’s money-printing machine could play a major role in the sustainable transition with its monthly €20 billion bond-buying programme, and in particular by purchasing the EIB’s obligations in the secondary market.

EIB becomes “climate bank”. Europe’s development bank launched an “ambitious” climate strategy last November. At its core lies a new lending policy that will end financing of fossil fuel-related projects by the end of 2021. Meanwhile, it plans to unlock €1 trillion in investment for climate and environmental goals.

As part of the strategy, the EIB set climate as its main financing goal and will dedicate half of its annual resources to this area, EIB vice-president Emma Navarro told EURACTIV. This would imply that each year, the bank could dedicate over €30 billion to support ‘green’ projects, unleashing further capital from the private sector.

Over the last five years, the EIB provided more than €65 billion of financing for renewable energy, energy efficiency, and energy distribution.