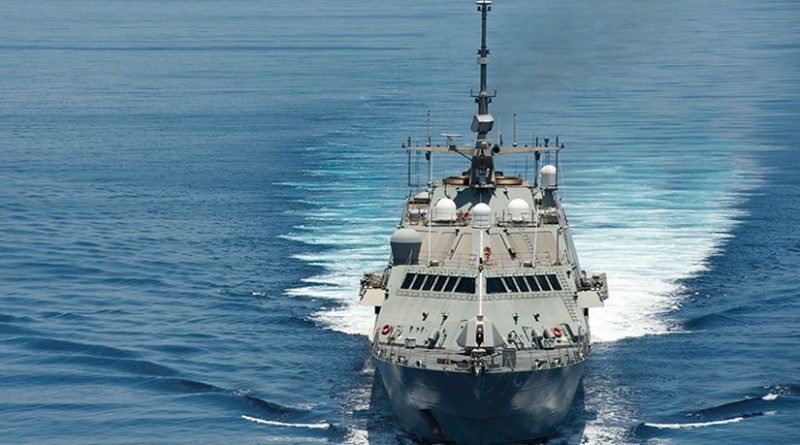 Coordinated patrols by littoral states are credited with containing piracy and armed robbery in the Straits of Malacca and Singapore. What are the prospects for their enhancement?

ATTENTION FROM various quarters is currently focused on the possible expansion of counter-piracy sea patrols in Southeast Asia. There are several strands and potential modalities to this, not all of which have been reported accurately.

Three basic options have been suggested: an ASEAN-led maritime force for counter-piracy and humanitarian assistance and disaster relief (HADR); observer status for Myanmar in the Malacca Strait Patrols (MSP); and counter-piracy patrols east of Singapore.

In March, Vice Admiral Robert Thomas, Commander of the US Seventh Fleet, was reported by media to have mooted the establishment of an “ASEAN-led maritime force” in the South China Sea. His remarks at the Langkawi International Maritime and Aerospace exhibition were made during a panel discussion on how to address the spread of piracy to the south-western reaches of the South China Sea.

However, international media reports conflated this with earlier comments suggesting that Japan could in future expand its naval and air presence into the South China Sea, and appeared to infer US support for a more expansive patrol concept for Southeast Asian navies in the context of maritime territorial disputes with China.

The ease with which such statements can be taken out of context highlights the difficulty in differentiating issues of maritime security from strategic factors in the South China Sea. This “ambiguity problem” has also reinforced Southeast Asian countries’ caution about embracing maritime security initiatives at a collective level in the South China Sea for fear of “offending” China, or raising mutual sensitivities around sovereignty.

As a result, like-minded ASEAN states have tended to pursue maritime capacity building and cooperation bilaterally or mini-laterally, while others travel at a slower pace, reflecting their less acute threat perceptions.

US efforts to boost maritime security and domain awareness in Southeast Asia are broadly tailored to reflect this patchwork reality, with HADR providing a common denominator template for defence-led engagement across ASEAN’s various multilateral security forums. There is no indication that the US Navy is promoting a new maritime patrol initiative in the region, though “ASEAN-led” efforts towards a more concerted region-wide approach are generally welcomed and encouraged.

In a separate development, Malaysian Defence Minister Hishammuddin Hussein has invited Myanmar as an observer to the Malacca Strait Patrols (MSP) counter-piracy initiative. Established in 2004, the MSP – Southeast Asia’s best-known maritime security mini-lateral – has three components: i) the Malacca Strait Sea Patrol (MSSP); ii) Eyes in the Sky; and iii) the MSP Intelligence Exchange Group. Participation until now has been limited to the three littoral states: Singapore, Malaysia and Indonesia, plus Thailand which takes part in the aerial patrols.

Although the coordinated patrols are often credited with containing piracy and armed robbery in the Strait, the paucity of public data on MSP activities makes an empirical judgement about their effectiveness impossible. Their major operational limitation is that the patrols are coordinated rather than joint, in deference to sovereignty concerns. The two other options for enhancing the MSP are: i) an expansion of their geographical remit, or ii) extending membership to the near-littorals and the ‘user’ community at large.

Given Myanmar’s capabilities, observer status or full membership would be unlikely to contribute much to the MSP’s operational effectiveness. The invitation, extended under Malaysia’s ASEAN chairmanship, is nonetheless noteworthy as a nod towards the Indian Ocean, a traditional blind spot for ASEAN and the source of multiple maritime security challenges.

Securing Myanmar’s cooperation in the outer approaches to the Malacca Strait could be aimed beyond counter-piracy, to include stemming the seaborne outflux of Rohingya Muslims from Myanmar – a particular concern for Kuala Lumpur. However, Singapore and Indonesia have yet to signal their approval. Singapore’s maritime security focus lies currently to the east.

Less in the public eye, Singapore has been exploring the possibility of introducing coordinated patrols east of the Singapore Strait including the nearby reaches of the South China Sea. This is in response to a rise in attacks on shipping including a spate of fuel syphoning incidents in the waters north of Indonesia’s Bintan island which lies near Singapore.

A major shortcoming of the MSP’s geographical limitation is that the deterrent value of the sea patrols does not extend much beyond the Straits themselves. Since piracy is inherently mobile the threat may be displaced to the South China Sea. Singapore has received support from Malaysia and Vietnam, both of which have broader reasons for cross-bracing maritime security relations with their ASEAN partners in the South China Sea – underlining the blurring of non-state and inter-state factors there.

However, Indonesia is unlikely to agree to an expansion of the MSP for two reasons. First, piracy continues to occupy a lower niche in Jakarta’s threat perceptions. Diverting resources to chase pirates in the near reaches of the South China Sea would be viewed as a distraction from the priority tasks associated with President Joko Widodo’s ‘Maritime Fulcrum’ aspirations, especially thwarting illegal foreign fishing in the archipelago.

Second, the MSP remain coordinated rather than joint largely in deference to Jakarta’s unbowing reluctance to allow Singaporean or Malaysian vessels to patrol within the portions of the Straits that are Indonesia’s territorial waters. Rather than expanding the MSP to cover the south-western South China Sea, a free-standing coordinated patrol arrangement is more likely to fly, though Indonesian participation remains uncertain.

Unrelated to sea patrols but still relevant for “ASEAN-led” maritime cooperation is the ongoing development of an intra-ASEAN set of naval protocols for HADR. This initiative was proposed by the Philippine Navy at the ASEAN Chiefs of Navy Meeting (ACNM), in Manila in September 2013.

It has since garnered support from Indonesia among others and a working group has delivered preliminary recommendations for the protocols, which may be formally adopted at the next ACNM in Myanmar this autumn. This could set an important inter-naval operational benchmark on a shared maritime interest in spite of the gulfs in capability and threat perceptions across ASEAN’s diverse membership.

ASEAN-led naval and maritime security cooperation continues to move forward, though not yet to the level that would support a Southeast Asia-wide joint or coordinated patrol force, or even an expansion of the Malacca Strait Patrols. However, an ad hoc counter-piracy arrangement to cover the south-western South China Sea is within reach for ASEAN’s like-minded.

Euan Graham is a Senior Fellow with the Maritime Security Programme at the S. Rajaratnam School of International Studies (RSIS), Nanyang Technological University in Singapore.