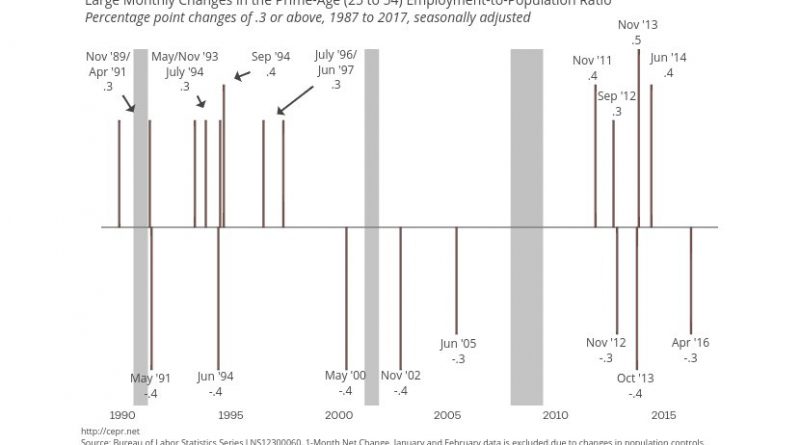 Despite low unemployment, there is room for growth

The unemployment rate rose very slightly to 4.4 percent in June, as the estimated size of the labor force expanded at its fastest rate (361,000) since last July (406,000). This is the second consecutive June in which the labor force estimate reversed a big change in May. Thus, despite the rise in the unemployment rate, 245,000 net new jobs in June raised the overall employment-to-population ratio (EPOP) from 60.0 percent in May to 60.1 percent in June.

Just as competition for workers has drawn people back into the labor market, so too are the employed seeing opportunities. The number of voluntary job leavers rose to 820,000 in June — up from 804,000 in May and 789,000 in April. This suggests a labor market favorable to workers.

This has been good news for workers of color as their experiences are acutely sensitive to the state of the labor market. The unemployment rate for blacks fell to 7.1 percent. Only in April 2000 has this rate fallen as low as 7.0 percent. Likewise, the unemployment rate for Hispanics fell to a record low 4.8 percent — matched only in October 2006.

For prime-age men (25–54), the EPOP fell to 85.2 percent in June and remains 0.2 percentage points above its year-ago level; for similarly-aged women, the EPOP rose to 72.1 — its highest level since late 2008. As with the overall EPOP these, these figures are particularly erratic for women, but the trend has been moving  steadily upward for several years. It is worth noting that the EPOP for prime-age women reached as high as 74.9 percent in 2000, suggesting that there is still plenty of room for jobs as long as the Fed allows the economy to grow.

The establishment survey showed further evidence that last month’s seeming weakness was a little misleading. Job growth rose to 222,000 in June, and nonfarm payroll jobs for April and May were revised up by 47,000.

The improvement was broadly based with nearly every sector showing faster growth in June relative to May. Healthcare and social assistance employment jumped 59,100 in the month and 136,900 in the last three. Though erratic, this is the strongest three-month growth in the sector since last August. After two months of zero growth (March and April) construction employment has grown by 25,000 in May and June. Likewise, after four months of disappointing data on jobs in retail trade, this sector added a modest 8,100 jobs. Though far from promising, this does more than reverse last month’s loss.

Elsewhere, manufacturing employment appears to have flattened since the start of the year — rising by 1,000 jobs after falling by 2,000 in May. Likewise, coal mining jobs were unchanged in the month. Though a political touchstone, these account for only 50,800 of over 146 million payroll jobs.

Finally, average hourly wages ticked up by 4 cents in June, and 2.5 percent over the last 12 months. Growth has been a little more modest in the last three months — growing at an annualized rate of 1.8 percent since March compared with 2.3 percent in the three months starting in December.

Thus, people continue to return to the labor force as jobs continue to be made available. This suggests that despite low unemployment, there is room for growth.

*David Rosnick, Economist at CEPR, is filling in for Dean Baker this month

The European Union is the most successful model of regional integration and one of the most influential international organizations. During