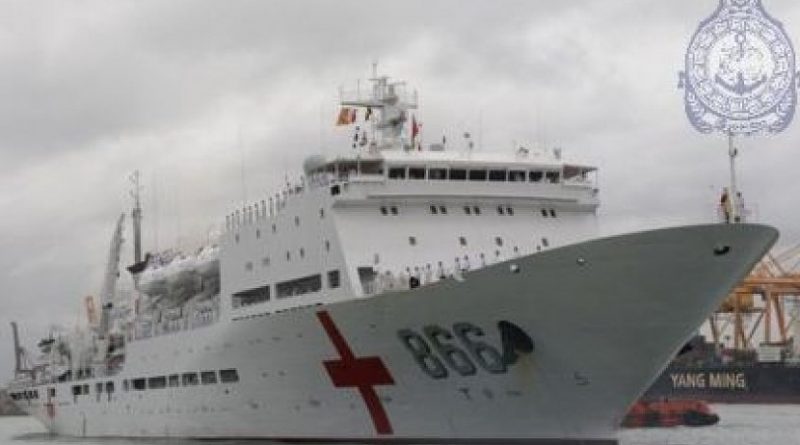 A Hospital Ship of the People’s Liberation Army Navy of China ‘Hepingfangzhou’ arrived at the port of Colombo Friday on a goodwill visit.

The ship was welcomed in accordance with naval customs by the Sri Lanka Navy.

The state of the art ship has been constructed in a bid to engage swiftly in humanitarian response to disasters around the world and it is also popularly known as the Ark of Peace.

The ship has treated over 120,000 people across from the globe during her circumnavigation. Further, this modern platform is equipped with all in-house facilities such as; theaters, intensive care units, consultant medical services, residential treatment units and Computerized Tomography Machines. Meanwhile, the helicopter onboard can be utilized in swift transfer of patients at any given time of emergency.

During the four day official visit in Sri Lanka, the officers of the Ark of Peace expect to meet with the Commander of the Navy, Vice Admiral Ravindra Wijegunaratne.

Further, the medical staff of the ship partnering with the medical personnel of the Sri Lanka Navy is scheduled to conduct several medical camps as well.

Arrangements have been made ready for Sri Lankan doctors and medical students to get onboard this Hospital Ship to experience a rare opportunity. The ship will leave the Colombo harbor on August 9.

Home » China’s ‘Ark Of Peace’ Arrives At Port Of Colombo