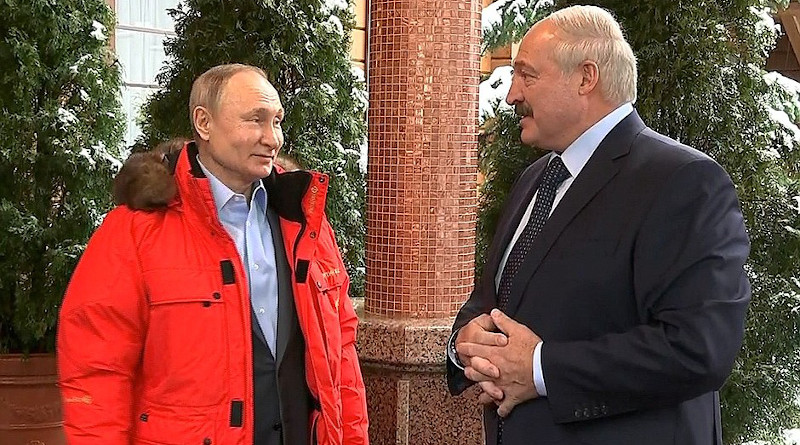 (RFE/RL) — About two-thirds through his 90-minute speech before a hall packed with the Belarusian political elite, President Alyaksandr Lukashenka turned his attention away from the candidates challenging him in the August 9 election and focused on another player with a stake in the vote.

“Russia is afraid of losing us,” he said. “After all, apart from us, it has no truly close allies left.”

Then he addressed the mysterious appearance of 33 Russian mercenaries who were arrested at gunpoint at a health resort near Minsk and accused of plotting terrorist acts. Foreign forces, Lukashenka claimed, were trying to destabilize the country. “It’s a very dangerous and strong signal,” he said. “These people were specifically sent to Belarus and given the command to wait.”

“They’ve decided to try out new forms of ‘color revolutions’ against us,” he said, referring to anti-government protests that pushed presidents from power in Georgia, Ukraine, Kyrgyzstan, and Armenia over the past two decades. “It won’t work.”

The election is shaping up to be the biggest challenge to Lukashenka’s rule in his 26 years at the helm of the country of 9.5 million.

A series of rallies in support of opposition candidate Svyatlana Tsikhanouskaya have drawn unprecedented crowds in recent weeks. Moreover, the sizable rallies are taking place in regions far from Minsk, where the population tends to be older, poorer, and often supportive of Lukashenka’s command-economy policies and Soviet-tinged nostalgia.

Lukashenka’s staying power has been due in no small part to Russian subsidies and trade policies that have helped buoy the Belarusian economy. But Moscow has scaled back that support in recent years and Lukashenka has pushed back against the Kremlin’s efforts to secure closer integration, sometimes accusing Moscow of seeking to swallow his much smaller country up.

What Does Moscow Want?

So, does Moscow want Lukashenka to win the election and stay in power? Or does the Kremlin want a new hand on the Belarusian tiller? What does in fact Russia want from the Belarusian election?

“The geography, the significance, the symbolism of Belarus means that what happens there means a lot more for those in charge in the Kremlin” than other places, said Nigel Gould-Davies, a former British ambassador to Belarus. “Belarus hasn’t seen this sort of moment since the mid-90s.”

“What does it look like to Moscow if a long-serving authoritarian leader in a Slavic state, whose economy is in decline, gets into trouble, and faces an opposition movement? And a free and fair election?” he said. “That sets a bad example” for Putin.

Lukashenka’s August 4 speech was the latest gauntlet to be thrown, said Dmitry Trenin, a longtime Moscow analyst and director of the Carnegie Moscow Center.

The speech “formally marks an end to special relations between Minsk and Moscow,” he said on Twitter. “Rather than humoring its disloyal former ally, the Kremlin will now look beyond him. With or without Lukashenko, Belarus is becoming a tug of war.”

A Soviet-era state-farm boss, Lukashenka was first elected in 1994 and managed to steer the country through the shoals of the post-Soviet collapse. His success came in part by spurning the deeper liberal economic reforms that Russia embraced while at the same time benefiting from Moscow’s subsidies.

He has also authorized brutally repressive police and security tactics that have marginalized opposition groups, wiped out civil-society organizations, and shut out independent media.

In recent years, he’s allowed small-scale entrepreneurship, particularly the IT sector in the capital. One of his would-be challengers in the election, who was barred from running on grounds supporters say were fabricated, helped build a software and technology park in Minsk.

But the economy is heavily reliant on agricultural exports to Russia, and, more importantly, cheap imports of oil from its eastern neighbor, which Belarusian refineries then process and resell at a significant markup to European markets.

Moscow has wanted Minsk to integrate with Russia, pushing for tighter ties under a union state that was created in the 1990s but exists largely on paper. Lukashenka showed little enthusiasm for the effort, mainly because of expectations he would lose his job, or worse.

Like other ex-Soviet leaders, Lukashenka was spooked in 2014 when Russia seized Ukraine’s Crimean Peninsula and stoked a still-ongoing conflict in eastern Ukraine that has killed more than 13,000 people and displaced more than 1 million.

Last year, the Kremlin made a new push for integration, and in December, Lukashenka and Putin met in St. Petersburg to sign documents to that effect.

It didn’t happen, and since then, Russia has turned up the pressure, turning off oil exports on New Year’s Eve, then partly restarting them five days later. Minsk then turned to Norway for oil. Lukashenka embraced visits by U.S. Secretary of State Mike Pompeo and then-White House national-security adviser John Bolton.

“It’s obvious that they don’t support Lukashenka; he is standing in their way,” said Yury Tsarik, a Minsk-based political analyst. “But they also don’t support civic opposition candidates.”

“A strong candidate who gets a strong win in the election — assuming Lukashenka concedes — would possibly become the next Lukashenka,” he said, suggesting the election could produce a leader with a firmer mandate to defy Moscow, not unlike Ukrainian President Volodymyr Zelenskiy.

“If he or she is legitimate, gets wide support, like Zelenskiy, there would be strong temptation to become an authentic state, and to cut ties with Russia,” he told RFE/RL.

Overall, what the Kremlin wants from Minsk is pretty much what it has always wanted, said Artyom Shraibman, a Belarusian political commentator: to keep it squarely in its sphere of influence, as a security buffer with NATO and a transit conduit for goods to the European Union.

“On a more tactical level, I don’t think that there is a detailed, either/or list of bullet points of what the Kremlin wants from Belarus each and every day,” Shraibman told RFE/RL. “I think the less noise Belarus makes the better, and the less problems are created, because Kremlin has a lot to worry about besides this usually troublemaking ally.”

Tourists At A Sanatorium

As if the economic pinch from Russia cutting subsidies and oil supplies wasn’t bad enough, Lukashenka has also struggled with the country’s response to the coronavirus. He’s repeatedly belittled the dangers of the virus, even as he announced recently that he himself had become ill but was now recovering.

At least some part of the large turnout at rallies for opposition challengers has been motivated by Belarusians’ unhappiness with the government’s response to the coronavirus, with the case count mounting to more than 68,000 as of August 6 — only a few thousand fewer infections than neighboring Ukraine, whose population is four times larger. The official death toll of 577 is widely seen as a major undercount.

In his August 4 speech, Lukashenka tried to put a positive spin on relations with Moscow, even as he sent clear signals that things weren’t what they used to be.

“Russia has always been, is, and will be our closest ally, no matter who is in power in Belarus or in Russia,” he said. “This is an insurmountable factor, it is deep within our peoples. Even in spite of the fact that brotherly relations with us have been changed to become a ‘partnership’,” he said.

Over the past year, Belarusian authorities have made clear moves targeting Russian interests in the country, kicking out the Russian ambassador, for example, and arresting a crew from Russian state TV.

And then there are the 33 Russians who turned up at a sanatorium outside of Minsk last month. Belarusian security agents raided the sanatorium, arrested the group at gunpoint, and broadcast evidence of the arrests on state TV on July 29.

Lukashenka and top security officials said the men were from the Kremlin-linked private military company Vagner, and suggested they were on a mission to destabilize Belarus and possibly undertake sabotage, depending on the election’s outcome.

Kremlin spokesman Dmitry Peskov denied the allegations, and insisted that Moscow was not interfering “in the domestic affairs of a sovereign state.” Foreign Ministry spokeswoman Maria Zakharova demanded that the Russians be released from detention. The deputy head of the Russian Security Council, Dmitry Medvedev, threatened “sad consequences” if they weren’t released.

Gould-Davies, now a senior fellow for Russia and Eurasia at the International Institute for Strategic Studies, placed blame for the deteriorating relations on Moscow. “It’s Russia’s great-power demands that have damaged this relationship,” he said. “It’s a mark of incompetence, though that may be too strong a word — a mark of how difficult Russia makes it for its neighbors, that it manages to have a bad relationship even with someone like Lukashenka.”

Ken Yalowitz, a former U.S. ambassador to Minsk, said Russia did not want chaos or uncertainty. But, he said, Moscow also didn’t want a reformer who would present a dangerous contrast with Putin, who has held power for over 20 years and now has the option of seeking to remain president until 2036.

“I think they would prefer Lukashenka to win, using a heavy hand, and as long as Lukashenka confines his criticism of Moscow to just rhetoric, to get himself through the election, they would turn the other cheek at this point,” he said.

Shraibman agreed. “Russia wants a win for Lukashenka but one that weakens him and a win that is also marked by protests, crackdown, and deterioration of relations with the West,” he said.

“Russia is not really keen on having the neighbors revolting, having revolutions around its borders because it’s the kind of chaos Russia cannot actually master and manage with any degree of certainty,” he said.

Home » What Does Russia Want From Belarus’ Election? – Analysis