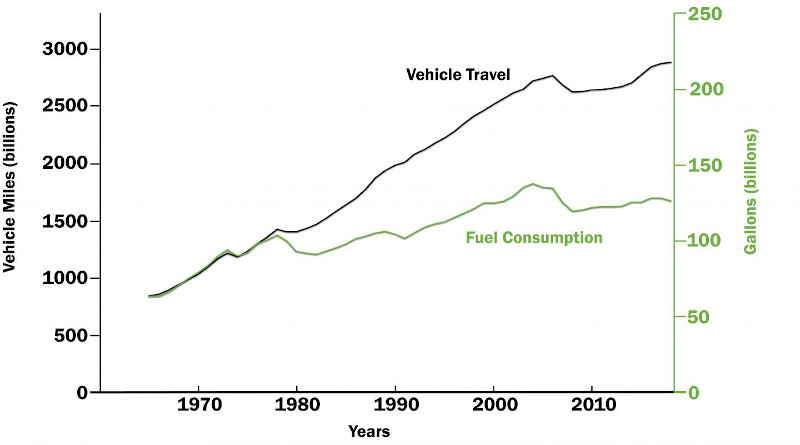 The graph shows vehicle miles traveled versus fuel consumption from 1965 through 2018 in the United States. While travel increased significantly during that time, fuel use dropped due, in large part, to the fuel economy standards and the fuel efficiency technologies that were developed and implemented to meet the standards. CREDIT: Graph courtesy of the researchers (Rebecca Ciez); Redesign by Bumper DeJesus

In one of the first comprehensive assessments of the fuel economy standards in the United States, Princeton University researchers found that, over their 40-year history, the standards helped reduce reliance on foreign oil producers, cut greenhouse gas emissions, and saved consumers money.

Using data including household spending data, oil use, and greenhouse gas emissions, the researchers found that the standards (known as the CAFE standards), which were first enacted in 1975 as a way to reduce dependence on foreign oil after the oil crisis, set well-defined societal objectives and were cost-effective, fair, durable and adaptive. The standards required automakers to produce more efficient vehicles over time, increasing the number of miles per gallon required of their vehicle fleets.

The researchers cite that the standards saved $5 trillion in fuel costs and prevented 14 billion metric tons of carbon from being released into the atmosphere, the equivalent of the United States eliminating all emissions from all sectors for nearly three years.

“It has been one of the most effective policies to date,” said Judi Greenwald, a co-author of the study, former top U.S. Department of Energy official and non-resident fellow at the Princeton University’s Andlinger Center for Energy and the Environment.

The paper, coauthored by Greenwald, Rebecca Ciez and David Greene, was published in the journal Energy Policy. Ciez was a Distinguished Postdoctoral Fellow at the Andlinger Center and Greene is a research professor in the Department of Civil and Environmental Engineering at the University of Tennessee, Knoxville. Ciez has accepted a position as assistant professor in mechanical engineering and environmental and ecological engineering at Purdue University.

“There really hasn’t been any comprehensive lookback to day one of the standards to consider what their impacts have been, how they changed over time, whether the potential threats to their effectiveness materialized or not, and their overall impact,” said Greene.

The researchers noted that the policies helped, in part, to keep the rate of yearly growth in U.S. gasoline consumption to 0.2% since 1975. The policy, in addition to fluctuations in gas prices, reduced oil imports and saved 2 trillion gallons of gasoline, enough to fuel all the light-duty vehicles in the United States for fifteen years.

“These standards have been remarkably effective from both an environmental perspective and an energy security perspective, and most people don’t realize it,” said Greenwald.

The authors said these types of regulations are more effective at improving fuel economy than other policy tools, like a gasoline tax, because they don’t rely on the consumer to make the long-term fuel-efficient choice and, therefore, gain cost benefits at the pump. The fuel economy standards move the calculation to regulators and require that manufacturers improve fuel economy across their product lines using technologies that may cost a little more but save consumers much more on fuel in the long run.

A prior study by Greene found that over the lifetime of the policy, the technology for efficiency upgrades increased the cost of cars by an average of $4,800, but yielded $16,000 in savings for consumers at the pump.

Dan Sperling, founding director of the Institute of Transportation Studies at the University of California, Davis, who is unaffiliated with the study, called it an “important and authoritative history and analysis.” “There is nothing like this in the literature,” said Sperling, who is also the Distinguished Blue Planet Prize Professor of Civil Engineering and Environmental Science and Policy at UC, Davis and a member of the California Air Resources Board.

Greenwald said the standards have evolved in ways that continue to benefit and serve the public and have endured various administrations and political tides. It is a testament to their initial design, as well as regulators’ adaptive responses to changing circumstances over time. In 2010, two sets of vehicle standards affecting automakers, one for greenhouse gas emissions and one for fuel efficiency, were harmonized so that manufacturers could meet one set of standards when designing new vehicles.

The analysis concludes with a recommendation to continue to increase the stringency of the standards based on the best available data and analysis, as regulators have done historically. The most recent rules promulgated by the Trump administration aim to loosen the fuel efficiency requirements by dropping the annual efficiency increase from five percent to one and a half percent through 2026. Given that transportation is the largest source of U.S. greenhouse gas emissions (GHG) and that people keep their cars for approximately 10 years, this would severely stymie environmental progress, the researchers said. The Rhodium Group, an independent research organization unaffiliated with the study, estimates that the policy change would achieve only one fifth of greenhouse gas reductions that the Obama-era policy would achieve.

Ciez pointed to the 1990s as an example of what can happen when fuel targets are effectively frozen. She said it led automakers to produce bigger, faster, and more polluting cars. Gas prices were cheap and gas-guzzling vehicles hit the road in mass numbers. Car companies made SUVs and vehicles with quicker acceleration times, which became very popular among American drivers. Ciez said without the standards, there is little incentive for automakers to focus on fuel economy as opposed to horsepower or vehicle comfort. The standards have spurred technological innovation, allowing cars to provide all three attributes – power, comfort, and efficiency – at a reasonable cost.

Regardless of the what happens over the next four years, Sperling said, the authors have provided “a model for assessing other policies.”

In the closing statement the authors contextualized this moment in history.

“It is likely that the United States is in the middle, not the end, of the story of the adaptive response of the vehicle CAFE and GHG standards.”