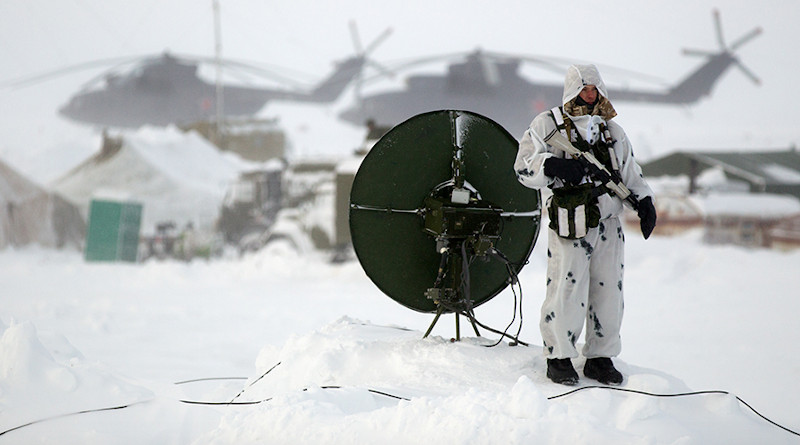 Russian President Vladimir Putin is a busy man. His ally in Belarus, President Alexander Lukashenko, is facing mounting pressure to resign after a dodgy election more than two months ago. Russia has made no meaningful progress in Syria and has even faced recent setbacks in Libya.

Moscow’s deep involvement in Ukraine is costing the state billions of dollars a year. Turkey is challenging Russia for influence in the South Caucasus in ways not seen since the 19th century. Oil prices are down, and coronavirus disease (COVID-19) infections are up.

Even with all of these challenges, there is another area very important to Russia which received a lot of attention this week — the Arctic. Putin finally put his signature to a new Russian Arctic policy, the main focus of which was energy resources, economic development, and security. The president’s focus on the Arctic is nothing new for Russia which has a long history in the polar region. In the early 18th century, at crippling cost to the treasury, Russia sent a number of large expeditions to explore and map the Siberian coastline.

The explorers, scientists, and adventurers who took part in the Kamchatka expeditions, known as the Great Northern Expeditions, numbered in their thousands. Even by today’s standards, these are still probably the largest combined scientific expeditions in history. Almost 300 years later, Russia is still staking new claims in the Arctic. In 2007, Artur Chilingarov, then a member of the Russian Duma, led a submarine exploration to the North Pole and planted a Russian flag on the seabed. Later he said: “The Arctic is Russian.” This is a sentiment shared by many in Russia today.

Putin treats the Arctic region with a high level of national importance. This is why the announcement of the new Russian Arctic strategy is so important. Today, Russia is motivated to play an active role in the region for three reasons.

Firstly, the Arctic is a low-risk way to promote Russian nationalism. Because nationalism is on the rise in Russia, Putin’s approach to the Arctic is popular among the population. For Putin, the Arctic is an area that allows Russia to flex its muscles without incurring any significant geopolitical risk and allows the average Russian to “rally around the flag.”

Secondly, Russia sees major economic potential in the region. In fact, the main focus of the recent Arctic strategy was on the region’s economic potential for Russia. Half of the world’s Arctic territory and half of the Arctic region’s population is located in Russia. It is well known that the Arctic is home to large stockpiles of proven, yet unexploited, oil and gas reserves. The majority of these reserves are thought to be located in Russia.

In particular, Russia hopes that the Northern Sea Route (NSR) which, during the summer months, can reduce the time it takes to travel by sea between Europe and Asia will become one of the world’s most important shipping lanes.

Finally, Russia sees itself playing an important security role in the region. Moscow has invested heavily in militarizing its Arctic region. While the area remains peaceful, Russia’s recent steps to militarize it, coupled with its bellicose behavior toward its neighbors, make the Arctic a security concern.

Russian infrastructure development, military structuring, and procurement have in recent years focused heavily on bolstering Russia’s Arctic capabilities. The country now has at least 34 key military installations in or near the Arctic. It is optimizing those facilities for cold-weather combat. It has expanded the variety and sophistication of capabilities deployed to the Arctic, while increasing the range and tempo of the often-aggressive nature of air and sea patrols in the region.

Russian policymakers are acutely aware that they face many geopolitical problems in the Arctic too. Although NATO does not have an agreed upon Arctic policy, military exercises in the region have been increasing.

In recent years under US President Donald Trump’s administration there has also been more focus on Arctic-related issues, especially in the context of big power competition in the region. China is also seen by many in Moscow as being a competitor in the Arctic region. The price of oil, and the impact of international economic sanctions, has made investments and developments in oil and gas exploration in the Arctic very difficult for Russia. Finally, grand initiatives such as the NSR have not proved to be quite as effective (and revenue generating) as many in the Kremlin had hoped.

As an Arctic power, Russia’s military presence in the region is to be expected. However, it should be viewed with some caution due to Russia’s pattern of aggression outside its borders in other places in the world such as Ukraine or Syria. Thankfully, even with increased geopolitical competition in the Arctic, tensions in the region remain low. So, with mounting problems for Russia in many places around the globe, do not expect Moscow to ignore or write off the Arctic region. For historical, cultural, and economic reasons the Arctic is simply too important. Right now, the situation is relatively peaceful. It remains to be seen if this will always be the case.

One thing is for certain though. The Arctic will increasingly become a strategically important region for many of the world’s major powers. It is a region for global policymakers to watch.

Home » What Is Behind Russia’s Aggressive Arctic Strategy? – OpEd