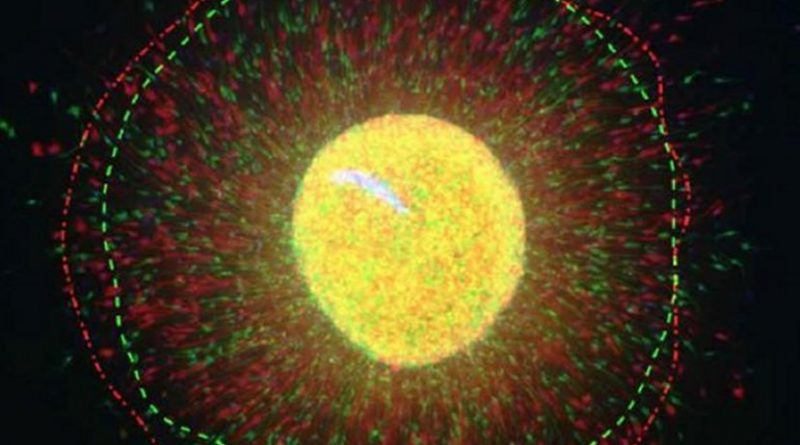 Scientists have long sought to unravel the molecular mysteries that make the human brain special: What processes drove its evolution through the millennia? Which genes are critical to cognitive development?

A new study provides insight on the matter by demonstrating that a gene controlling our biological clocks also plays a vital role in regulating human-specific genes important to brain evolution. The findings from the O’Donnell Brain Institute open new paths of research into how CLOCK proteins produced by the CLOCK gene affect brain function and the processes by which neurons find their proper place in the brain.

“People have been searching for genes that are important for brain evolution, within the context of our larger, folded brains,” said Dr. Genevieve Konopka, a neuroscientist with UT Southwestern’s Peter O’Donnell Jr. Brain Institute. “We now have evidence that CLOCK regulates many genes outside of circadian rhythms, so we can place it as a key point in the hierarchy of important molecular pathways for human brain development and evolution.”

Human brains are notably bigger than the brains of our closest relative, the chimpanzee. But because size alone doesn’t account for cognitive abilities – mammals such as whales and dolphins have larger brains – scientists have sought to understand what makes the human brain smarter.

Dr. Konopka’s research has focused on the neocortex, an area of the brain with distinctive folds that is associated with sight and hearing and considered the most recently evolved part of the cortex. Her lab released a study in 2012 that found CLOCK has increased expression in the human neocortex compared to other primate brains. The findings prompted further questions about what these body-clock proteins were doing in a neural region that is not traditionally considered a hub for circadian rhythm function.

The new study published in Genes & Development offers some answers:

The findings suggest there may be much more to learn about various functions controlled by CLOCK, identified in 1997 by UT Southwestern’s Dr. Joseph S. Takahashi. His groundbreaking discovery expanded on Nobel Prize-winning fruit fly research by showing biological clocks exist in mammals. Multiple studies since Dr. Takahashi’s finding have suggested links between CLOCK function and health issues such as cancer, cognitive disorders, and depression.

Dr. Konopka’s study – which used postmortem brain tissue and human neurons in culture – is the first to examine CLOCK’s role in the human neocortex.

“A novel function of the CLOCK gene in the brain not directly related to circadian rhythms is unexpected, and its possible role in the evolution of the human neocortex is very exciting,” said Dr. Takahashi, a corresponding author on the new study, Chairman of Neuroscience at UT Southwestern, Investigator for the Howard Hughes Medical Institute, and holder of the Loyd B. Sands Distinguished Chair in Neuroscience.

The Konopka Lab will seek to expand on the findings by studying brain organoids – essentially mini human brains grown in a dish – to understand the specific targets that CLOCK regulates.

The team will manipulate CLOCK in these tissues and document changes in function, such as defects in neuronal migration or the development of other cell types. Dr. Konopka’s research will also involve “humanized mice,” which have been given a boost of CLOCK in their neocortex. The lab will monitor for various changes in brain development and behavior.

“There is so much we don’t know about human brain development and evolution,” said Dr. Konopka, Associate Professor of Neuroscience and the Jon Heighten Scholar in Autism Research. “We’re putting more pieces of the puzzle together to understand which genes are connected to others.”