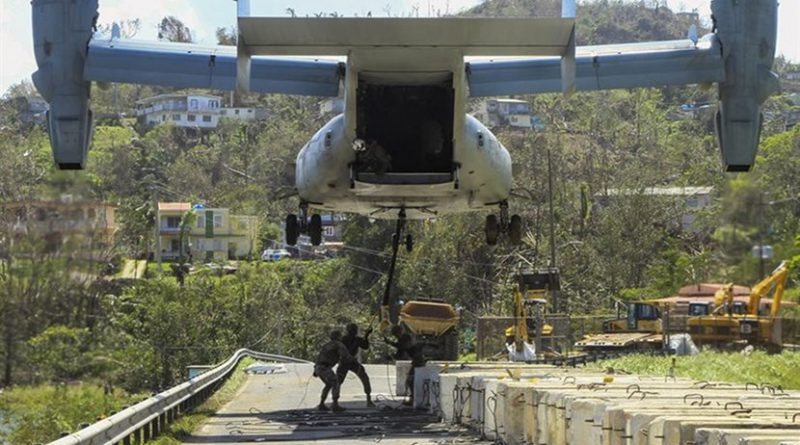 The Category 5 storm, Hurricane Maria, struck the tiny Caribbean island of Dominica on September 18, 2017. The Commonwealth of Dominica, with a population of a mere 72,000, was devastated by the storm. 27 people were killed and 90 per cent of all structures were either destroyed or damaged, including vital communications links.1 Prime Minister Roosevelt Skerrit described the damage as “mind-boggling” and noted that even he had to be rescued from his official residence which was now without a roof and completely flooded.2 The scale of the disaster and damage to crucial infrastructure and communications overwhelmed the ability of the small Commonwealth of Dominica Police Force (CDPF), which has some 460 personnel.3

However, in a display of regional solidarity, Dominica’s fellow CARICOM members rallied to her aid. The effort was coordinated by the Caribbean Disaster Emergency Management Agency (CDEMA), an inter-regional network of the disaster management agencies of the Caribbean Community (CARICOM) member states. The defence forces of Trinidad & Tobago, Jamaica and Barbados spearheaded the relief effort, which was later assisted by an invaluable contribution from the Bahamas.

Beyond the military assistance, the Dominican Government received contingents of police officers from Trinidad, Barbados, Grenada, Saint Lucia and Jamaica to reinforce the beleaguered CDPF. Grenada additionally dispatched a team from its police Special Services Unit which joined a team of communication and logistics personnel which were sent to assist the CARICOM Disaster Relief Unit. In addition, Saint Lucia sent fire service personnel specializing in urban search and rescue as well as disaster assessment officials.4 CDEMA played a pivotal role in assessing Dominica’s needs and requesting appropriate assistance.

The Jamaica Defence Force (JDF) dispatched a dedicated 120-man strong Disaster Assistance Response Team (DART). Elements of the DART are still deployed in Dominica and are tasked with the following activities:5

The JDF provided additional assistance by providing one of its two Damen SPa 4207 patrol vessels (the largest in its fleet) to assist the Dominica Coast Guard. The HMJS Middlesex conducted extensive patrols around the Dominica coast and was successful in intercepting and apprehending illegal migrants in addition to seizing illegal weapons.6

The Trinidad and Tobago Coast Guard deployed no fewer than three vessels to the Dominica relief effort. The first vessel was the Damen SPa 5009 vessel TTS Moruga which transported “food, water, generators and a 21-member disaster relief team” which assisted in securing and managing the distribution of relief items.8 Additional TTDF personnel were dispatched by civilian aircraft along with medical teams. Subsequently, the Damen FCS 5009 TTS Brighton was dispatched with 23.3 tonnes of relief supplies. In addition to the crew, a team from the Trinidad and Tobago Regiment along with five civilian medical personnel was also aboard to provide additional medical services and assist in relief distribution.9 Soldiers from the Trinidad and Tobago Regiment were deployed alongside the CDPF to control the orgy of looting that followed the disaster. Finally, on October 23, 2017, the largest patrol vessel in any CARICOM Coast Guard, the TTS Nelson, departed Port of Spain to provide further disaster relief to Dominica.10

The Royal Bahamas Defence force vessel, HMBS Lawrence Major, a Damen 5612 landing craft, reached Dominica on October 29, somewhat later than the other Caribbean Coast Guard vessels. This vessel is the only landing craft operated by CARICOM Coast Guards, and has specialized disaster management packages. One of these, a mobile galley, can prepare up to 1,000 meals per day, marking a substantial improvement in the facilities available, as photographs earlier showed TTDF and JDF personnel trying to cook under makeshift sheds. The HMBS Lawrence Major has a carrying capacity of approximately 14 x 40 foot containers or 28 x 20 foot containers of equipment and supplies. The vessel can also transport 50,000 gallons of potable water and 22,000 gallons of fuel, making it a vital asset to the relief effort.11

Despite their undoubtedly essential contribution to the Dominica relief effort, capability gaps were revealed during the course of operations. First among these was a continuing lack of air transport assets for disaster management teams. Both the Jamaican DART and the TTDF had to charter civilian aircraft to transport their personnel to Dominica. Both the TTDF and JDF once possessed viable air transport capabilities but Jamaica’s aircraft are now out of service and of the TTDF’s two aircraft, only one is airworthy at any point in time and is assigned to maritime patrol duties.

Helicopter support was also deficient. The only two helicopters deployed were the NHSL’s S-76s – the use for which the Trinidad and Tobago Government will have to pay the company. The JDF’s helicopter fleet – four Bell 407s and two Bell 412EP – was not deployed, perhaps due to serviceability issues while the TTDF’s fleet of AW139 helicopters is currently grounded owing to the inability of the government to pay for their maintenance. The absence of the TTDF helicopters was particularly significant as they are specially equipped for search-and-rescue operations.12

Of the coast guard vessels committed to the Dominica relief operation, only the HMBS Lawrence Major was able to transport specialized disaster relief modules which proved to be invaluable. While other vessels could transport considerable quantities of supplies, they lacked the containerized modules of the RBDF vessel. In recognition of this, it was mooted that Trinidad and Jamaica jointly acquire a vessel, with Canadian support, to be used specifically for disaster assistance.13 It remains to be seen whether any progress will be made in respect of a jointly-owned vessel. Budgetary constraints would appear to preclude any acquisition of vessels of a similar type to the HMBS Lawrence Major despite the undoubted utility of additional vessels with such capabilities.

While some specialized disaster relief units such as the JDF DART and the TTDF 3rd (Engineering) Battalion exist, these are limited in their equipment holdings as well as in their ability to move their equipment within the region. It was noticeable that both the JDF and TTDF teams deployed to Dominica had little by way of heavy engineering equipment despite both militaries holding stocks of the same. Deficiencies in transport, therefore, remain a major issue to be addressed if CARICOM’s armed forces are to achieve their potential as disaster response forces.

It is unfortunate that it is unlikely that this lacuna will be rectified in the near future with the consequent result that while the region’s armed forces will spearhead any disaster relief effort, they will never be able to bring their full capabilities to bear outside their home countries. Inevitably, the burden of such efforts falls on the larger defence forces in the region – those of Jamaica, Trinidad & Tobago, the Bahamas and Barbados. Unless these forces are provided with the ability to deploy, not just their personnel but their equipment regionally, their impact will be below their potential. It is hoped that the Dominica experience will provide renewed focus on capability gaps in equipment and deficiencies in planning and training of personnel for disaster relief operations will be plugged. Should this not be done, the consequences in the future could be dire.

About the author:
*Dr. Sanjay Badri-Maharaj was a Visiting Fellow at IDSA. He is an independent defence analyst and attorney-at-law based in Trinidad and Tobago. He holds a PhD on India’s nuclear weapons programme and an MA from the Department of War Studies, Kings College London. He has served as a consultant to the Trinidad and Tobago Ministry of National Security.