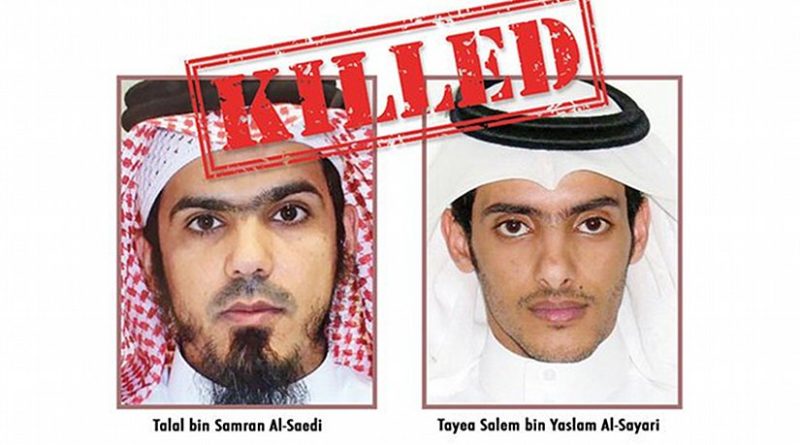 Two terrorists were killed on Saturday after a shootout with Saudi security forces in a district north of the capital Riyadh.

Acting on a tip-off that the wanted terrorists were present at a villa in the Al-Yasmeen district, security forces cordoned off the area and asked the extremists to surrender, security sources told Arab News.

The militants, who were armed with Kalashnikov rifles, fired randomly at the police and tried to escape in a security patrol car. A police officer, coming from behind the patrol car, shot at the two militants and killed them. He was slightly injured and taken to hospital for treatment.

“The two assailants had two machine guns, two explosive belts and a hand grenade,” Al-Turki said. “Chemical substances used in making explosives, men’s clothes, a female gown, some food and three gas cylinders have also been found inside the terrorists’ house,” he added.

Security sources confirmed that Al-Sayari was one of the most dangerous terrorists wanted by security authorities.

He was also one of the key Daesh-linked militants who made bombs and explosive belts. In addition, Al-Sayari was wanted for involvement in last year’s terrorist attack on an emergency forces mosque in the Asir region.

Al-Saedi, the other militant, was released from the Mohammed bin Naif Center for Counseling and Care in 2012, according to preliminary information.

Some witnesses in the Al-Yasmeen neighborhood confirmed that they saw security men chasing two armed men after dawn prayer. They added that the militants refused to surrender and fired at the security men, who fired back and killed both of them.

The witnesses noted that the two extremists had lived in the district for nearly two months and they used to ride a black Yukon car. They also pointed out that the terrorists were seldom seen out of their house.

A pilot project to combat Dengue by means of Wolbachia, is to be launched on February 17″ in Dematagoda and