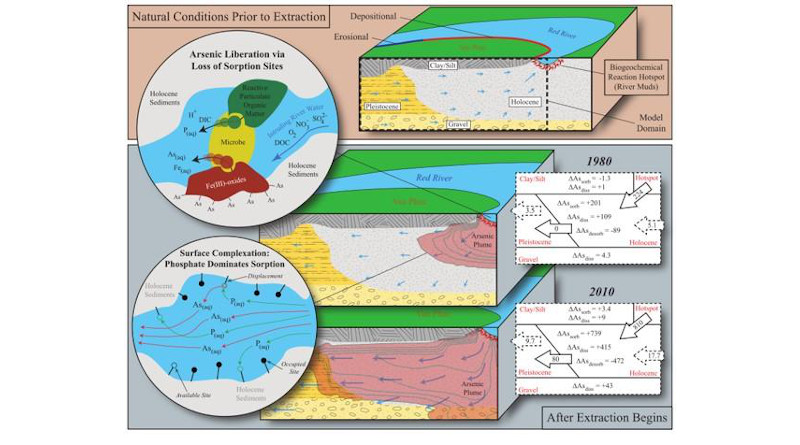 Naturally occurring (geogenic) groundwater arsenic contamination is a problem of global significance, with noteworthy occurrences in large parts of the alluvial and deltaic aquifers in South and Southeast Asia. To address this problem tremendous research efforts have been dedicated over the last two decades to better understand the sources and distribution of arsenic-polluted groundwater.

Now, an Australian team of scientists from Flinders University, CSIRO and the University of Western Australia, together with their colleagues at the Swiss Federal Institute of Aquatic Science and Technology (Eawag), have used computer modelling to integrate much of what has been learned over the years into computer simulations that mimic the complex interactions between groundwater flow, solute transport and geochemical reaction mechanisms.

Such models are important to analyse field observations, to unravel which chemical and physical processes play a role, and to predict the behaviour of arsenic within aquifers – where and when pollution may occur in the future. The results of their study have now been published in the latest issue of Nature Geoscience.

Reconstructing the past to predict future arsenic behaviour

The research team selected a highly arsenic polluted site near Hanoi (Vietnam) to develop and test their computer model. In a first step they used the tiny concentrations of tritium that had entered the groundwater system from the atmosphere during the times of nuclear bomb testing, and its decay product helium, a noble gas, to reconstruct how fast and where the groundwater was moving over the last 5 decades.

Once the model simulations were able to match the concentrations that were measured, additional complexity was added to the model in order to simulate how arsenic was mobilised and transported in the Holocene aquifer.

At the study site, changes in groundwater flow occurred over the past 50 years since the city of Hanoi markedly increased the extraction of groundwater to satisfy its steadily increasing water demand; this showed to be the main trigger for arsenic pollution in the aquifer.

The computer modelling allowed the researchers to pinpoint the source of arsenic down to the river muds that are regularly deposited at the more slow-flowing zones of the Red River. The organic matter contained in those muds fuelled a biogeochemical reaction that led to the release of arsenic and its km-long transport into the aquifer underlying the Van Phuc village, a process that continues to this day.

Employing their developed computer model in predictive mode the researchers were able to illustrate the interplay of four key factors on the evolution and longevity of arsenic release at surface water/groundwater interfaces, (i) the abundance of reactive organic matter; (ii) the abundance of iron oxides; (iii) the magnitude of groundwater flow; and (iv) river mud deposition rate.