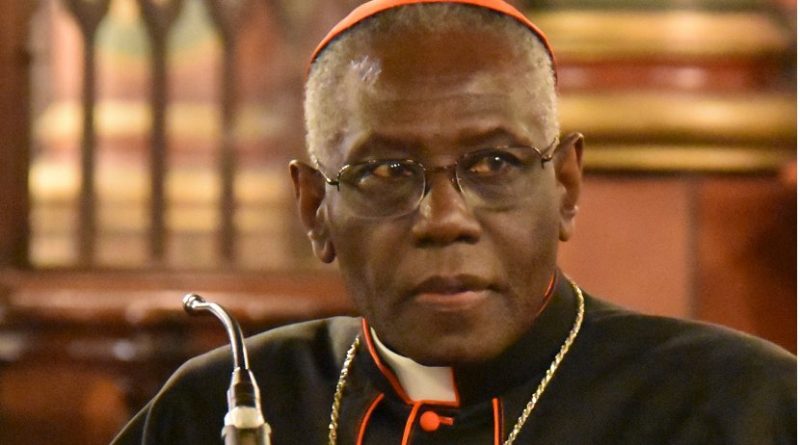 Hours after the publication of a controversial open letter regarding the coronavirus pandemic, the prefect of the Church’s dicastery for liturgy and sacraments, listed among the signers of the letter, said he did not sign it.

The letter, titled “Appeal for the Church and the World,” says the coronavirus pandemic has been exaggerated to foster widespread social panic and undercut freedom, as a preparation for the establishment of a one-world government.

Cardinal Robert Sarah, prefect of the Vatican’s Congregation for Divine Worship and Sacraments, tweeted: “I share on a personal basis some of the questions or concerns raised with regard to restrictions on fundamental freedoms, but I have not signed this petition.”

“A cardinal prefect of the Roman Curia must observe a certain reserve in political matters, Sarah wrote in another tweet, “so I explicitly asked this morning the authors of the petition titled ‘for the Church and for the world’ not to mention me.”

Sarah was listed as a signatory of the letter when it was published May 7 by the National Catholic Register, LifeSiteNews, and other websites. Sarah’s denial raises questions about the legitimacy of other reported signatories to the letter.

Jeanette DeMelo, editor of the National Catholic Register, told CNA that the principal author of the letter is Archbishop Carlo Vigano, a former papal emissary to the United States.

Vigano made headlines for an August 2018 letter that alleged Vatican officials had ignored warnings about the sexual abuse of disgraced former cardinal Theodore McCarrick. Since that time, Vigano has released numerous letters expressing his viewpoints on matters in the Church, which include criticisms of Pope Francis and other curial officials.

DeMelo said that Vigano had vouched for the authenticity of Sarah’s signature.

“The Register contacted Archbishop Vigano, the principal author, and asked him specifically about the authenticity of the signature of Cardinal Sarah and he said ‘I can confirm 100% that Cardinal Sarah signed it.,” DeMelo told CNA.

The letter laments the social distancing and stay-at-home orders issued to slow the spread of the coronavirus pandemic, suggesting they are contrived mechanisms of social control, with a nefarious purpose.

“We have reason to believe, on the basis of official data on the incidence of the epidemic as related to the number of deaths, that there are powers interested in creating panic among the world’s population with the sole aim of permanently imposing unacceptable forms of restriction on freedoms, of controlling people and of tracking their movements,” the letter said.

“The imposition of these illiberal measures is a disturbing prelude to the realization of a world government beyond all control,” it added. (bold original)

Among the letter’s reported signatories are four cardinals: Sarah, who has now indicated he is not a signatory; Cardinal Gerhard Muller, former prefect of the Congregation for the Doctrine of the Faith, Cardinal Joseph Zen, emeritus bishop of Hong Kong, and Cardinal Janis Pujats, emeritus archbishop of Riga, Latvia.

Strickland told CNA by email May 7 that he “did sign off on this letter.”

Along with several other bishops, the well-known auxiliary bishop of Astana, Kazakhstan, Bishop Athanasius Schneider, is listed as a signer of the letter.

Another reported signatory is Fr. Curzio Nitoglia, a priest of the Society of St. Pius X, a traditionalist group in “irregular communion” with the Church. Nitoglia is the author of “The Magisterium of Vatican II,” a 1994 article that claims that “the church of Vatican II is therefore not the Apostolic and Roman Catholic Church instituted by our Lord Jesus Christ.”

The May 7 letter argued that the coronavirus pandemic has been sensationalized and exploited, to impede civil rights and exact government control over individuals and families.

The letter said that “the facts have shown that, under the pretext of the Covid-19 epidemic, the inalienable rights of citizens have in many cases been violated and their fundamental freedoms, including the exercise of freedom of worship, expression and movement, have been disproportionately and unjustifiably restricted.”

“Many authoritative voices in the world of science and medicine confirm that the media’s alarmism about Covid-19 appears to be absolutely unjustified.”

Nearly 4 million people worldwide have tested positive for the coronavirus, and at least 270,000 have died. In some countries, death rates in the months of the coronavirus pandemic have far exceeded death rates over the same months in previous years, suggesting to some demographers and epidemiologists that coronavirus deaths have been dramatically undercounted.

The pandemic, and the social distancing and stay-at-home orders issued to slow its spread, have become a source of considerable controversy in recent weeks. In the U.S., protests in several state capitals have gathered demonstrators in close proximity to one another, a move public health experts say could lead to new outbreaks of the disease.

The letter said that the economic crisis occasioned by the global pandemic “encourages interference by foreign powers and has serious social and political repercussions. Those with governmental responsibility must stop these forms of social engineering, by taking measures to protect their citizens whom they represent, and in whose interests they have a serious obligation to act.”

“The criminalization of personal and social relationships must likewise be judged as an unacceptable part of the plan of those who advocate isolating individuals in order to better manipulate and control them,” the authors added.

No cure or therapeutic treatment has yet been identified for the virus. In early weeks of the pandemic, President Donald Trump hypothesized that hydroxychloroquine, an inexpensive anti-malarial medication, could help treat the disease. U.S. researchers have largely moved away from the medication, especially after a study by the Veterans’ Administration found that administering the drug leads to higher death rates among patients receiving it.

Some, including television hosts Laura Ingraham and Sean Hannity have alleged that the study is inaccurate. Some protestors have suggested the VA study was intended to discredit Trump or profit vaccine manufacturers.

In an apparent reference to the hydroxychloroquine controversy, the letter said that: “Every effort must be made to ensure that shady business interests do not influence the choices made by government leaders and international bodies. It is unreasonable to penalize those remedies that have proved to be effective, and are often inexpensive, just because one wishes to give priority to treatments or vaccines that are not as good, but which guarantee pharmaceutical companies far greater profits, and exacerbate public health expenditures.”

“Let us also remember, as Pastors, that for Catholics it is morally unacceptable to develop or use vaccines derived from material from aborted fetuses,” the letter added.

The letter argues that governments do not have the right to ban or restrict public worship or other kinds of ministry, and asks that any such restrictions be rescinded.

On the sacraments, which have been subject both to voluntary restrictions and public health orders in some states, the letter noted that “the Church firmly asserts her autonomy to govern, worship, and teach.”

“The State has no right to interfere, for any reason whatsoever, in the sovereignty of the Church. Ecclesiastical authorities have never refused to collaborate with the State, but such collaboration does not authorize civil authorities to impose any sort of ban or restriction on public worship or the exercise of priestly ministry. The rights of God and of the faithful are the supreme law of the Church, which she neither intends to, nor can, abdicate. We ask that restrictions on the celebration of public ceremonies be removed.”

While restrictions on public worship have been met with public criticism in many places, the objections have been most pronounced in Italy.

After Italy’s prime minister announced in late April new health measures that would continue prohibiting religious gatherings, the Italian bishops released a statement denouncing the decision, which the bishops criticized as “arbitrary.” Two days later, Pope Francis seemed to signal his own view, praying while celebrating Mass that Christians would respond to the lifting of lockdown restrictions with “prudence and obedience.”

Along with cardinals, bishops, and priests, the letter’s signatories also included some academics, journalists, and scientists. Included among them are Vatican journalists Marco Tosatti and Robert Moynihan, Lifesitenews editor John-Henry Westen, Stephen Mosher, president of the Virginia-based Population Research Institute, and the leaders of pro-life groups in Texas and Ohio.

The letter’s signatories encouraged Catholics, and “all men and women of good will” to “assess the current situation in a way consistent with the teaching of the Gospel. This means taking a stand: either with Christ or against Christ.” (bold original)

“Let us not allow centuries of Christian civilization to be erased under the pretext of a virus, and an odious technological tyranny to be established, in which nameless and faceless people can decide the fate of the world by confining us to a virtual reality. If this is the plan to which the powers of this earth intend to make us yield, know that Jesus Christ, King and Lord of History, has promised that ‘the gates of Hell shall not prevail’ (Mt 16:18).”

The Holy See has not yet commented on the letter.