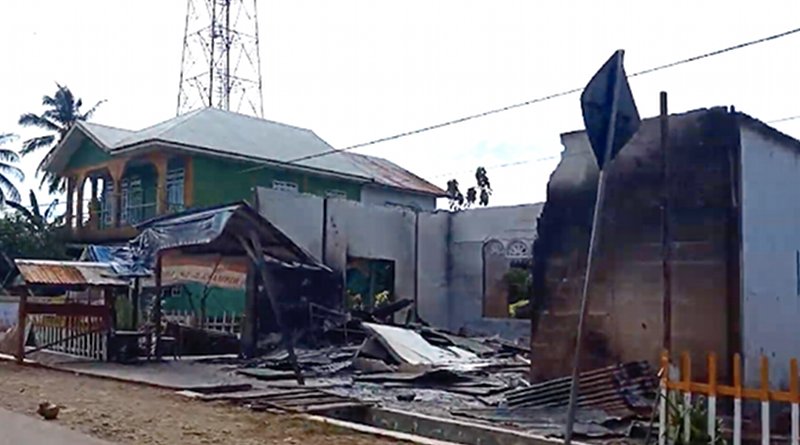 A destroyed home in the village of Gunung Jaya, in Indonesia’s Southeast Sulawesi. Clashes between residents of rival villages left two dead and forced at least 700 people to flee their homes. (Photo supplied)

At least two people were killed and more than 700 forced to flee their homes during communal clashes between rival villages at an Eid al-Fitr celebration in Indonesia’s Southeast Sulawesi province.

Another eight people were reported injured and at least 87 homes were destroyed in the violence that erupted on June 4 and lasted two days in the village of Gunung Jaya on Buton Island.

The clashes began after dozens of residents from the nearby village of Sampuabalo rode motorcycles through Gunung Jaya, according to media reports.  The noise made by the motorcade angered locals, leading to heated words and violence, the English-language Jakarta Post newspaper reported.

“Our priority is to calm things down and to prevent further clashes breaking out,” he said. He said a thorough investigation would be carried out.

“The police are now collecting evidence to find out who the provocateurs really are,” he said, adding that those confirmed dead and injured were attacked with machetes or received arrow wounds.

Dedi Ferianto from the Buton Legal Aid urged the local government to deal with the aftermath carefully. Social and religious leaders should play a role in the healing process, he said.

Special attention must be paid to all victims and affected villagers to prevent acts of revenge, he added.

Southeast Sulawesi Governor Ali Mazi promised to help rebuild the destroyed houses, saying a team of inspectors would assess the damage on June 7.

“I hope everyone can forgive each other,” he told news portal detikNews.com.