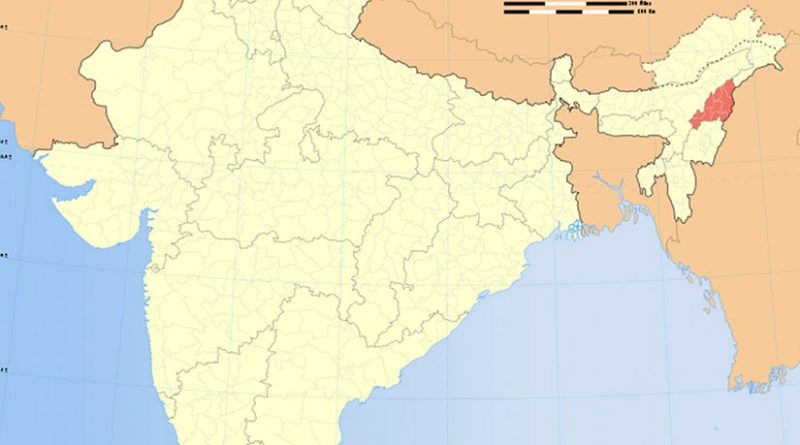 The headlines of the leading Indian newspapers roared on August 4, 2015 about a historic peace accord signed between the Government of India and the National Socialist Council of Nagaland (NSCN). The provisions upon which the accord has been finalized is kept secret and highly confidential as of now.

Although the media in general claimed that the Agreement has been signed between the Government of India and the NSCN, it requires mention that NSCN as a single entity exists no more. The former National Socialist Council of Nagaland got divided among two factions in 1988 to form NSCN (I-M) and NSCN (K); a brief about which has been mentioned towards the end of the article.

In addition to the two prominent factions, there have also been other factions coming up amongst the Naga leadership which vary from each other in terms of the territorial definition of the proposed “Naga Homeland” or the “Nagalim”. The recent peace accord has been signed by the Indian government with the NSCN (IM) faction which has been indulging in discussions with the Government of India as per a ceasefire agreement signed on July 25, 1997. Another point that requires mention is that, the June 4, 2015 attack on the 6 Dogra Regiment of the Indian Army in Manipur was considered to be an action of the NSCN (K) faction, which presently is the most violent and active insurgency group in the northeastern part of India and with which no peace accords have been signed so far.

Genesis of the Naga movement

The Naga Hills came under British administration in 1881. Prior to the coming of the region under colonial administration, Nagas were living independently as indigenous people. They had, and even today, to a great extent have their own distinct social life, laws, customs, cultures and modes of governance. The seeds of discontent against the foreign rule which were sowed long ago gradually kept growing and eventually took an organizational form with the formation of the Naga Club in 1918. The Naga Club stood up staunchly against the Simon Commission in 1929.

Standing by the fact that Naga Hills had remained mostly self-governed throughout good part of history, the Naga National Council (NNC) was formed under the leadership of Angami Zapu Phizo in 1946 to demand for an independent Nagaland. As India was almost on the eve of getting its independence from the British rule, the Naga National Council (NNC) on August 14, 1947 declared Nagaland an independent state. The NNC resolved to establish a sovereign Naga state and conducted a referendum in 1951 in which the majority (99%) called for an “independent” Nagaland.

As the dreams of breathing in a free Nagaland appeared to be a distant dream, given the indifference of the Indian Government towards the genuine Naga grievances, Phizo in 1956 formed the underground Naga Federal Government (NFG) and the Naga Federal Army (NFA) and kick started the new phase of armed struggle in the Naga Hills.

Simultaneously with the resistance movement began New Delhi’s approaches to tackle it. The leadership in New Delhi, which at that time had just come out of the embryo and had been struggling with the difficult job of integrating the princely states, was reluctant to take harsh measures against the freedom loving Nagas.

As a result, on June 29, 1947, the then Assam Governor Sir Akbar Hyderi signed a 9-point agreement with the moderates in the NNC. The 9-point agreement recognized the predominance of the NNC in the Naga Hills and laid down nine areas where the NNC could exercise its authority. The NNC was left in control of the resources and land in the Naga Hills and a mechanism to impose, collect and spend land revenue was detailed in the agreement. The agreement thus, recognized “the right of the Nagas to develop themselves according to their freely expressed wishes.”

The ambiguity in the 9-point agreement accruing from the clever use of language, which New Delhi has been ever efficient in, was believed to be the cause for future discord between the Nagas and the Indian Government. In its last paragraph, the Agreement said: “The Governor of Assam as the Agent of the Government of the Indian Union will have a special responsibility for a period of 10 years to ensure the observance of the agreement, at the end of this period the Naga Council will be asked whether they require the above agreement to be extended for a further period or a new agreement regarding the future of Naga people arrived at.”

The NNC interpreted this clause as the right to withdraw from the Indian Union if it so desired after 10 years. While the leadership at New Delhi interpreted it as nothing more than a mere option to change the administrative structure in the Naga Hills. Thus, when around 1955 the Indian Government started consolidating its grip in the Naga Hills and ignored NNC’s demand to open political dialogue on the “future of the Nagas”, the armed struggle in the Naga Hills began. New Delhi’s disregard to the referendum of 1951 had insulted the hopes of peaceful settlement to such an extent that on March 22, 1956 Angami Phizo formed the underground Naga Federal Government (NFG) and the Naga Federal Army (NFA). The NNC was subsequently joined by the Burmese Nagas to form the Eastern Naga Revolutionary Council making the Naga Army the largest in South Asia.

The Indian government rather than attending to the genuine grievances of the Nagas, or trying to reduce misconceptions, initiated stringent counter insurgency measures including the imposition of the draconian Armed Forces Special Powers Act (AFSPA) in 1958. Since then, the frontier region has never been back to peace again and has remained a confrontational bone of contention for India’s Look East policy.

As the discontent in the Naga Hills turned into a fierce armed separatist movement, the Indian Government unleashed stringent counterinsurgency measures and at the same time initiated dialogue with the moderate factions with an aim to buy their loyalty. That culminated in the 16-point agreement with the Naga People’s Convention in 1960. From the perspective of the Nagas, the Agreement seems to be the most rewarding of all accords because it led to the formation of the separate state of Nagaland within Indian Union in 1963. “This marks the first real Indian effort to divide the Naga society between moderates and hardliners, and the concessions accruing from the agreement were intended to create a political space for the moderates to the exclusion of the believers in armed struggle.” i The post-colonial Indian State was thus successful in sustaining the colonial legacy of the “carrot and the stick”

The Shillong Accord was signed on November 11, 1975 between the Government of India and the “representatives of the underground organizations”, a term used to denote those elements within the NNC that were willing to give up arms and accept the Indian constitution. The Accord instead of bringing an end to the Naga movement brought in further contentions by splitting up the NNC into pro-accord and anti-accord factions.

It was on the aftermath of the Shillong Accord that, a group of the NNC cadres under the leadership of Thuingaleng Muivah decided to part away from the NNC to form a new group. The breakaway faction included three prominent names which in due course appeared to be nightmare to the Indian State, namely – Thuingaleng Muivah, Isak Chisi Swu and Shangwang Shangyung Khaplang. The faction named themselves the National Socialist Council of Nagaland (NSCN) after its formal grouping in 1980. In a short span, the NSCN succeeded in completely pushing the NNC to oblivion. With the death of Angami Phizo in 1991, the might of the NNC further faded away and it made way for the NNC as the sole vanguard of the Naga movement.

NSCN and the recent agreement

The factionalism in the Naga leadership did not end with the formation of the NSCN in 1980. The NSCN was further divided into two factions on ground of dissimilarities in terms of the territorial calculations for the proposed Naga homeland, “Nagalim”. The two emerging factions were namely NSCN (K) to be led by the Burmese Hemi Naga (a Naga tribe across the international Indo-Myanmar border) leader, Shangwang Shangyung Khaplang and the NSCN (I-M) to be led by Tangkhul Naga ( a Naga tribe inhabiting mostly the Ukhrul district of Manipur) leaders Thuingaleng Muivah and Isak Chisi Swu.

NSCN (K)’s idea of a greater Naga homeland or the “Nagalim” includes areas beyond the borders of the Indian nation state extending to the peripheral regions of Myanmar. While NSCN (I-M)’s idea of a greater Naga homeland includes areas with Naga habitations along and across the territorial borders of the Indian states Assam, Manipur and Arunachal Pradesh.

Although the terms of the recent Accord has not been made public, following are some of the expected possibilities given the age old demands of the NSCN.
The NSCN (K)’s demand of including areas of Myanmar seems to be a distant dream as it involves altering of international borders. This is something next to impossible given the recent antagonism of India along Myanmar border and subsequent chest-thumping in New Delhi injuring the Burmese sovereignty. Hence, the NSCN (K) faction has duly stayed away from any further discussions with New Delhi as of now. Whatever be the provisions, the Khaplang faction is obvious to reject it and continue its armed struggle. Thus, the Accord would merely be the co-option of the Isak-Muivah faction while the disturbances in the region are expected to still continue.

Although the demand of NSCN (IM) to include areas forming part of present day Assam, Manipur and Arunachal Pradesh seems to be very much under the sovereign capacity of India, it too is surrounded with contentions. Article 3 of the Indian Constitution empowers the Parliament to alter the boundaries of its states and such alteration shall not call for amendment of the Constitution. The boundaries of its States can be altered by the Indian Parliament by a simple majority. Given the majority in the Parliament of the ruling NDA regime and also given the present ruling regime in Nagaland called Nagaland People’s Front’s alliance with NDA, it seems to be a cakewalk for New Delhi to come up with a territorial reorganization in the northeastern region as it did in 1972.

But the Modi government before resorting to any such measure must brush up the dust of memory to recall the violent protests in Assam, Manipur and Arunachal Pradesh that broke out every time New Delhi tried to enter into ceasefire agreements with the NSCN. It is not very old a story when the three states saw violent protests in 1997 when the peace process began with NSCN and also in 2001 when the central government had extend the cease fire agreement with NSCN. The Governments and the population at large of the three states will in no ways accept any alteration in boundaries injurious to their own interests. Yet another alarming factor is the statement from the other insurgent groups in the region who have been fighting for similar gains in their respective states warning New Delhi of uniting against any un-favorable decision.