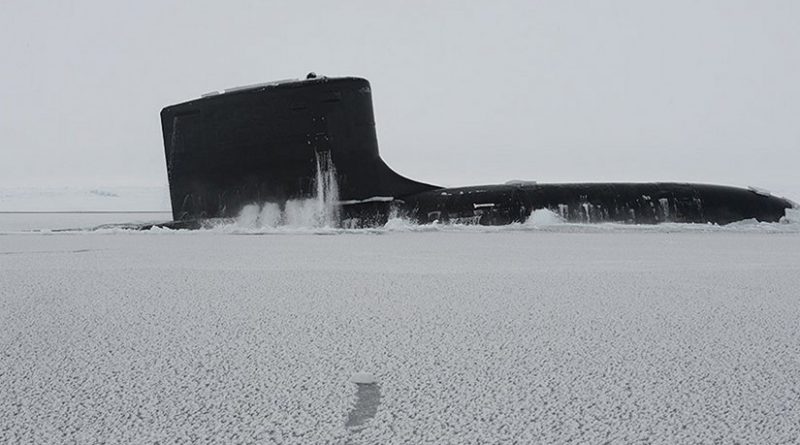 With the rapid melting of ice in the Arctic region, the long-isolated region is becoming a more accessible zone for commercial fishing, fresh water, minerals, coal, iron, copper, oil, gas, and shipping. Thus, the region is increasingly catching the world powers’ attention.

Arctic states – Canada, Denmark (via Greenland), Russia, Norway and the U.S. – are in rush to exploit all these opportunities from the region, which is believed to hold huge oil and natural gas resources. With such lust for resources, there is the likelihood that the slow militarization, which has already been initiated by the stake-holding states, will be intensified, jeopardizing the peace and stability of the region and the globe.

The ice of the region is already reduced by as much as 50% from 1950s. The region is warming faster than other areas across the globe. Such rapid melting of ice is making the region a more “accessible” zone. The melting of the sea ice has been opening up trade routes (during the summers) between Asia and Europe through the Arctic Ocean; the same region where such trades routes were unimaginable even couple of decades ago. In 2007, the Northwest Passage between the Pacific and Atlantic Oceans opened for the first time in memory.

The constant change in the climate and the increasing accessibility to the region would make the extraction of oil and gas from the region much easier. Estimations from different corners reveal that the region is speculated to hold oil reserves of upto 13% of the global total of undiscovered oil, upto 30% of natural gas, and also other precious metals. Such ‘speculations’ and ‘accessibility’ have given rise to plenty of disputes that have emerged among the aforementioned five countries surrounding the region.

Therefore, all countries surrounding the region are involved in disputes regarding the ownership and control over different parts of the region. Alongwith these five Arctic countries, China and the UK are also involved in the dispute through their claims over the Svalbard archipelago, which happens to be within the region.

Some of the Arctic countries that are claimant to the disputes have been attempting to come to a solution through the Commission on the Limits of the Continental Shelf (CLCS) and the United Nations Convention on the Law of the Sea (UNCLOS). However, a constructive solution, which would bind all the claimants to the Arctic disputes to abide by it, could not be reached through these CLCS and UNCLOS.

This is because, both CLCS and UNCLOS lack the appropriate mandate from countries across the world, including the aforesaid five Arctic countries, to impose “legally binding” decisions or provisions for any maritime disputes. Therefore, the absence of a binding legal regime creates scopes for intense territorial and maritime disputes concerning the control, exploration and exploitation of the energy resources in such a region that is becoming increasingly accessible for such purpose (i.e. purpose of energy exploration and exploitation).

In the prevailing scenario, all the Arctic countries, which are involved in the territorial and maritime disputes among themselves, have been moving towards militarizing the region in order to acquire each of their respective objectives in the region. Norwegian foreign secretary Jonas Gahr Stoere already expressed that the presence of “military, navy and coastguard” in the region is necessary.

Canada has planned a deep water “naval facility” at Nanisivik, which lies at the entrance to the disputed Northwest Passage. Canada promised (under former PM Stephen Harper’s administration) to build armed ice-breakers, several patrol ships and several vessels in order to proceed towards gripping the Arctic. In 2011, Canada conducted large-scale “military exercises” in the region.

In August 2015, the U.S. permitted Shell to drill for oil in the Chukchi Sea, which falls within the periphery of Alaskan Arctic. The U.S. “Coast Guard” has already deployed “sophisticated ships, aircrafts and other maritime assets” in the Alaskan Arctic for the duration of Shell’s drilling in the Arctic. Through such presence, the U.S. is not only trying to exploit energy resources of the Arctic region, but also trying to keep its “military presence” deep inside the region.

On the otherside, in 2007, Russian scientists dived to the seabed in the Arctic Ocean and planted a titanium Russian flag (Russia claimed that it was flag of Russia’s ruling party) in order to beef up their claims. Russia has already moved to restore a Soviet-era “military base” and other “military outposts” in the Arctic. In early 2015, Russia exercised Arctic “military patrols” from its Northern Fleet, involving “38,000 servicemen, more than 50 surface ships and submarines and 110 aircrafts”.

More interestingly, Russia is currently planning to jointly explore for oil in Russia’s Arctic fields with China, which is increasingly becoming a strong “military power” besides being an economic giant. Through such move, Russia is trying to make sure that Russia has a “rising military power” like China involved into its stake in the Arctic region so that such cooperation favours Russia at the time of escalation of any “military conflict”.

As of yet, the Arctic region is largely untouched by mankind. However, with the ice caps melting, access to the Arctic oil and gas reserves, which is estimated to be worth hundreds of billions of dollars, will become easier – a prediction that has already sparked a military competition in the region. Such militarization of the region is likely to increase with almost all the countries urging for increasing their military deployments and exercises, and there appears little hope and opportunity for any diplomatic resolution (or political agreement) regarding the disputes. It can be well presumed that without any diplomatic resolution (or political agreement), the current non-hostile debate over the Arctic could turn into a violent confrontation.

It seems our globe does not lack reasons to engage in chaos. The two world wars began as European conflicts, only to turn gradually into world wars. Likewise, if the disputes over the control of the Arctic resources are not resolved quickly, it could turn into a larger military conflict that would not just involve the Arctic countries, but would also drag a larger part of the world into this conflict. And for sure, the start of such war would mean the cold, yet beautiful, Arctic region would become the targets of war machines– destroying the environment and the stability of the region and the globe.