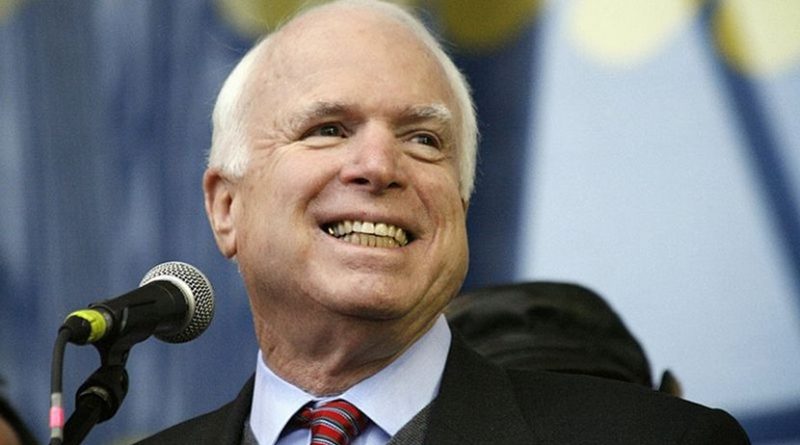 John McCain personified the worst of United States, and his death ceremony brought out the most worthless elements of Black America.

The death of Senator John McCain was an opportune moment for the corporate media and bipartisan establishment elite to tighten their grip on public opinion and simultaneously attack Donald Trump, the man they can’t trust to do their bidding. It wasn’t difficult to do. White supremacy and the doctrine of Manifest Destiny never lurk far from the surface. It is easy to turn a white man into a saint when he is famous for dropping bombs on Asians who turned the tables when they captured and tortured him.

But there was clearly more than the usual white nationalism going on. Donald Trump is also at the heart of this story. As president of the United States, he ought to be the de facto leader of the Republican Party. But he eschewed their tradition of winks and nudges directed at their base of white voters and instead went straight for the racist jugular in his 2016 presidential campaign. He speaks to the nativist “America first” instincts with an occasional nod to their loss of status in a hyper capitalist economy. The very things which make him popular with white people make him unpopular with an establishment fearful that he won’t make good on the neoliberal and imperialist consensus of the duopoly. They are stuck with a president who may not do what they want.

Trump’s presidency makes one thing very clear about this country. Any crime, including war crimes, can be disappeared if the perpetrator follows the rules of decorum. Donald Trump is the graceless, boorish man who sees no need for a filter. He has no charm, no personal traits that give him an out. His persona clearly shows why he would separate families seeking asylum or let the wealthy pay fewer taxes.

Other presidents put on a show of respectability. They couched their evil doing in terms of humanitarian need, even when they were killing people. They understood the importance of being liked on a personal basis in order to have their crimes diminished or forgotten in the court of public opinion.

Trump Derangement Syndrome is easily conjured up by a gullible population with no class identity or true political ideology. Politics is treated like a kind of religion where key players are considered good or bad. If they know how to behave in public they can be considered good. The rehabilitation of George W. Bush and John McCain proves that the bad guys can be transformed into good if someone comes along who is thought to be worse.

Even George W. Bush, who didn’t “care about black people” is rehabilitated in the Trump era. Suddenly he was “not so bad” or it was said that he really cared about the country because he wasn’t a traitor who came to office with the help of the Russians. The transformation is easy if the invasion of Iraq is opposed because it is carried out by a disliked person and not because interventions are violations of international law and are therefore criminal by definition.

In the McCain deification phenomena Trump was always depicted as negatively as possible while McCain could do no wrong. Trump was disinvited from the memorial but was still criticized because he played golf when it was held. But truth wasn’t the point. Squashing the man who may put the elite system at risk was very much the issue.

Nor are black people immune from this madness. When a black man became the head of the governmental crime syndicate the black radical tradition was tossed aside as an inconvenience to the Barack Obama love fest. John McCain was deemed one of the bad guys in 2008 when he ran against Obama, but only because he was running against Obama. Congressman John Lewis compared him to George Wallace in those days. Now in the era of the bad guy president Lewis lauded McCain as “a great warrior who defended this nation’s honor in times of war and peace.” No one questioned the congressman on this bizarre inconsistency.

The gathering at the memorial service was a who’s who of mass murder. As Henry Kissinger, Dick Cheney, Bill Clinton, Obama, and Bush all joined in lifting up one of their confederates the coverage became more and more maudlin. The more sickening the better and the more the public ate it up.

The site of Barack and Michelle Obama among the evil doers was too much for a politically immature black community to handle. When Bush handed Mrs. Obama a cough drop the corporate media pounced. Black people got the vapors along with others who once said they hated McCain and Bush.

The sight of black people eulogizing a man whose politics were so antithetical to their interests was difficult to watch.We have been transformed in the rightward shift too and erase our history and our consciousness in a sad effort to identify with a system which should always be understood as an adversary.

In one of the ironies of this story Donald Trump is vilified for avoiding the draft while McCain was bombing the Vietnamese people. Of course this means that Trump didn’t kill anyone. McCain did and is now the hero to those who want to love the good guy. A cough drop from Bush can melt hearts, but Trump’s lack of a Vietnam body count is condemned.

Trump has said that the media are “the enemies of the people.” Of course he means that they are his personal enemies. But they are ours too and their coverage of McCain’s death proves it. It is a sad day when black people blather on endlessly about patriotism and killers being honorable. We can’t allow Trump or the press to make us deranged. The McCain propaganda extravaganza should be the last time that we as a people behave so dishonorably to ourselves.