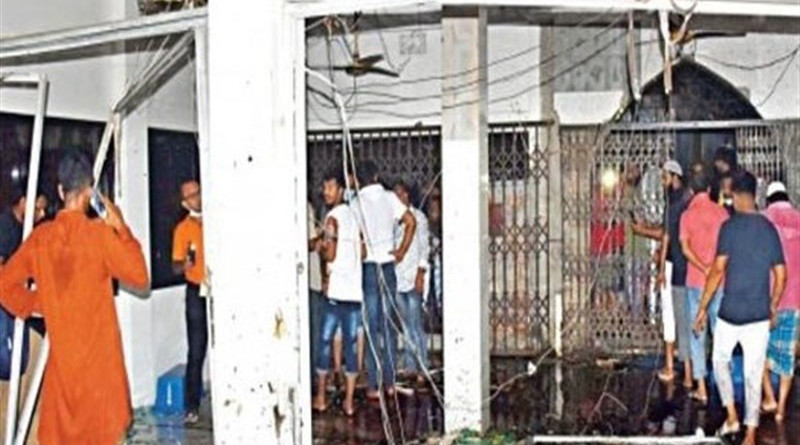 A deadly explosion at a mosque in Bangladesh has killed 26 people and injured dozens, triggering nationwide shock and fury over alleged negligence by state regulatory bodies.

The tragic accident, thought to have been caused by a leak from a gas pipeline, occurred at West Talla Baitus Salam Mosque in Narayanganj district, about 30 kilometers from capital Dhaka, during evening prayers on Sept. 4.

The explosion smashed doors and glass windows of the mosque and left 39 people including children with severe burn injuries.

Victims of the blast were rushed to the burns and plastic surgery unit of Dhaka Medical College Hospital, where 26 succumbed to their injuries, media reported.

Local Muslims have alleged that gas leaked from a faulty underground pipeline and accumulated on the ground floor of the mosque.

Quoting a mosque official, media reported that state-run Titas Gas Ltd. had sought 50,000 taka (US$588) from the mosque committee to repair the leaking pipeline but did not carry out the work as the amount was not paid.

Prime Minister Sheikh Hasina expressed grave shock over the tragedy. She said measures have been taken for proper treatment of the injured and to provide compensation to families of the dead.

During a parliamentary session on Sept. 6, Hasina said a probe committee has been formed to find out the reason for the explosion. She also asked the cabinet secretary, electricity and gas authorities to identify the cause.

She also questioned how the mosque was permitted to operate over an underground gas pipeline.

“If we could learn from our experience with Covid-19, I believe we could be more conscious and concerned in our personal and institutional safety, care, cleanliness and maintenance. Sadly, we have failed to overcome our carelessness and negligence from personal levels to government. Even in religious worship places, regular safety check-ups and maintenance are largely neglected,” Father Gomes told UCA News.

“It is very common for people to live with great risks where gas pipes have leakages and vehicles are plying with faulty tires and brakes, no glass and no lights. Trains and boats are overloaded and fall into accidents. It happens because people take for granted that nothing will happen.”

In churches across the country, a special prayer was offered for eternal peace of the victims and condolences for their family members and relatives, Father Gomes said, adding that priests have started checking safety issues in church buildings as the accident had caused panic in the Christian community too.

Holy Cross Father Elias Hembrom, parish priest of St. Paul’s Church in Narayanganj with 3,000 Catholics, said the community is shocked over the tragedy

“We are shocked and remember the victims in prayers and Masses. The parish committee has a plan to visit victims to console them,” Father Hembrom, told UCA News.

“Serious negligence and a lack of alertness should be blamed for the loss of innocent lives. Such tragedies should never happen.”

“We also demand the main cause and those responsible for the explosion due to negligence be identified and due action be taken. State regulatory bodies should be alert to avoid such tragedies.”