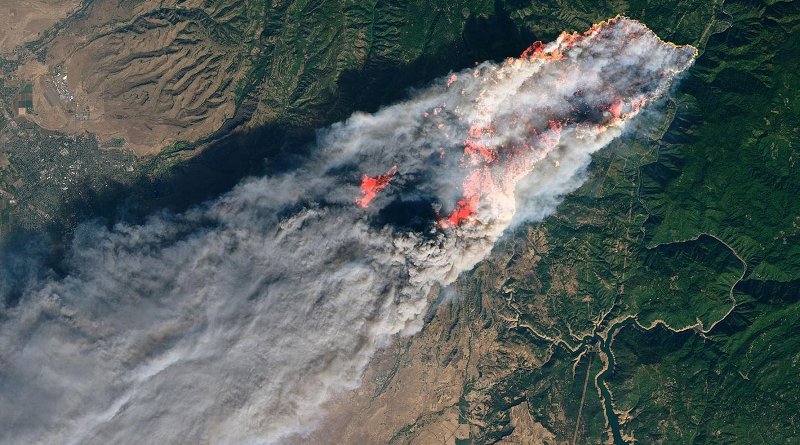 On the morning of Nov. 8, 2018, the Camp Fire erupted 90 miles north of Sacramento, California. By evening, the fast-moving fire had charred around 18,000 acres and remained zero percent contained. Credit: NASA

While the economic cost of natural disasters has not increased much on average, averages can be deceptive. The costs of major disasters like hurricanes Katrina, Maria and Dorian or the massive tornado swarms in the Midwest have increased to a disproportionately larger extent than those of lesser events, and these major disasters have become far more expensive, according to an international team of researchers.

According to the researchers, climate change is linked to an increase in the frequency and intensity of natural disasters, which leads to the necessity of planning for and evaluating the risk of these disasters. Two years after Hurricane Maria, Puerto Rico is still recovering, and weeks after Dorian decimated Abaco and Grand Bahama, the recovery process of what looks like an enormous blast zone is still unclear. The impacts on New Orleans of Hurricane Katrina in 2005 are still visible in that city today.

“We have a whole distribution of damages that we usually average to determine economic impacts,” said Francesca Chiaromonte, holder of the Dorothy Foehr Huck and J. Lloyd Huck Chair in Statistics for the Life Sciences and professor of statistics at Penn State. “But it is the extreme events that cause the damages that are most difficult to deal with.”

With the larger, dramatic events becoming more costly, understanding the impacts and planning for future costs are important. If only averages are looked at, people can miss important changes.

“Large events can overwhelm local infrastructures,” said Klaus Keller, professor of geosciences and director of the Center for Climate Risk Management at Penn State. “Many decision-makers are designing strategies to manage climate risk. The success of these strategies often hinges critically on how extreme events are changing.”

Policies based only on average annual or decadal costs do not account for the increasing impact of the most dramatic events.

“Things really ramp up at the top 5% mark,” said Chiaromonte, who is also scientific coordinator of the EMbeDS Department of Excellence at the Sant’Anna School of Advanced studies in Pisa, Italy. “And when we get to the top 1%, damages increased approximately 20 fold between 1970 and 2010.”

The researchers chose a quantile regression to analyze the data to move away from “average” data findings. They also accounted for some important controls, such as changes in population and wealth over time. Even when accounting for these changes, single-event damages in the top 1% are estimated to increase by $26 million every year.

“While the effect of time on averages is hard to detect, effects on extreme damages are large, statistically significant and growing with increasing percentiles,” the researchers report in the Proceedings of the National Academy of Sciences.

The researchers note that increases in the costs of extreme natural disasters are not uniform around the globe. They appear more dramatic in areas traditionally considered temperate.

While the economic impact of extreme natural disasters is increasing, based on the data considered in the study, mortality is on a downward trend, perhaps because of lower vulnerabilities, improved early warning systems and evacuation systems, and more effective relief efforts. However, this should not breed complacency, the researchers note. The data indicate an increase in casualties linked to extreme temperature events.

An important implication of this study is that the insurance industry and public disaster management institutions should expect to face increasing economic losses, the researchers said. Another important implication is that adaptation measures will be critical in temperate areas as well as in the tropics.

The researchers also note that if part of the shift to larger, more expensive, natural disasters is the result of climate change, then mitigation of climate change is an obvious approach to mitigating economic impacts.

Home » Costs Of Natural Disasters Are Increasing At The High End