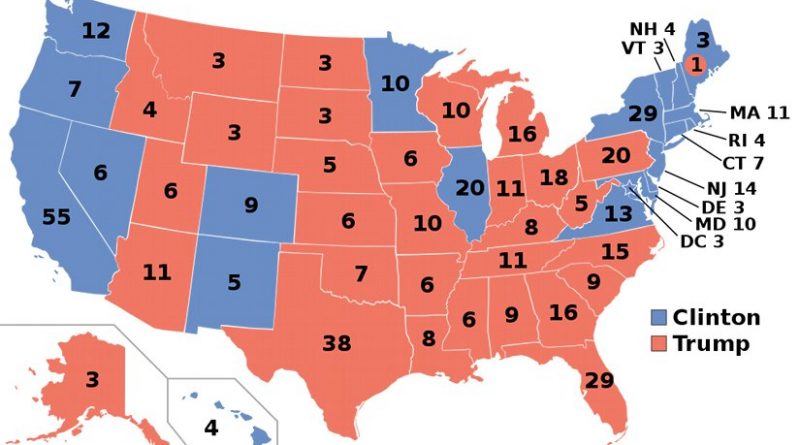 Since Donald Trump won a majority of electors on election day while losing the popular vote by over 2.5 million, there has been a movement afoot by a small number of electors, activists, and intellectuals to try to block Trump at the Electoral College.

A group of eight Democratic electors has gotten together to try to persuade other Democrats to support a rational Republican, a Republican elector resigned rather than vote for Trump, and on December 5, the first Republican elector who pledged to vote against Trump came public in a New York Times op-ed.

The argument that the “Hamilton Electors” and a number of intellectuals and lawyers have made in op-ed pages is that the Electoral College was conceived as a check on the passions of the public were they to elect a demagogue or someone totally unqualified.

As Parker said in her column yesterday:

The Founding Fathers didn’t fully trust democracy, fearing mob rule, and so created a republic. They correctly worried that a pure democracy could result in the election of a demagogue (ahem), or a charismatic autocrat (ahem), or someone under foreign influence (ditto), hence the rule that a president must have been born in the United States. We know how seriously Trump takes the latter.

Most important among the founders’ criteria for a president was that he (or now she) be qualified. Thus, the electoral college was created as a braking system that would, if necessary, save the country from an individual such as, frankly, Trump.

Where have readers heard this argument before?

The founders of the United States had these questions about democracy in mind when they wrote the Constitution. They knew that many voters were uninformed, so they put in systems to deal with that, like the election of the president by the Electoral College and the election of Senators by state legislatures. Progressives and populists have steadily taken away those safeguards for reasons that were lauded as pro-democratic.

The Seventeenth Amendment, passed in 1912, turned Senate elections to popular vote. Steadily laws have been passed in many states binding Electoral College electors to the results of a state’s president elections, and in most other states, the culture surrounding voting is such that there could be mass unrest if a state’s electors voted for someone other than the person who won their state’s election.

In my article on October 30, considering the problems democracies are facing around the world, I returned to the one of the original reasons why the Electoral College was conceived. Is now the time to use the Electoral College as originally intended? Trump’s unsuitability for office is clear.

To give but a few examples, from B+D’s January piece laying out the case:

Here we have a candidate who threatens to sue newspapers for reporting on his bankruptcies, who said he would “certainly” create a government database of Muslims in America, who incited his fans to physically assault a non-violent protester and said that they were right to do so, defended Putin from charges that he kills political opponents by equivocating the United States with Russia (“Our country does plenty of killing, too”), and his personal account tweets racist messages about “white genocide”. This is all fact. He has done it all. No amount of politically correct denials from Team Trump can change the reality.

Now that he has assumed the role of president even before having taken office, let alone having been officially elected, observers can see Trump continuing to put such demagogic behaviors into practice. He coerced Carrier to keep some jobs in America and threatened other companies with “retribution” if they don’t. In January he threatened newspapers that reported critically on him; yesterday he threatened to break contract with Boeing apparently over a slightly critical comment Boeing’s CEO made about trade. His attacks on specific businesses are the stuff of demagogues.

His foreign policy appears at times to be ill-thought-out, and he is surrounding himself with off-the-rails advisors like Michael Flynn, who espouses conspiracy theories, fear of Muslims, and reportedly had a predetermined notion that Iran was responsible for the #Benghazi attack. Michael Flynn, as national security advisor, is the kind of guy who could pull the U.S. into a war with Iran on the basis of no intelligence.

Trump’s continued ownership of a business empire in the U.S. and around the world puts him in violation of the Constitution’s Emoluments Clause, not to mention the fact that it would create clear conflicts of interest and opportunities for corruption even if all his businesses were only in the U.S. and even if his children were in charge. As someone who uses his own foundation to enrich himself, admitting as much in a post-election IRS filing, there’s no reason to believe he wouldn’t try to use the presidency to enrich himself. Indeed, he has already had met with Indian business partners, urged Scotland to prevent the development of wind turbines near his golf course, and invited the executive vice president of his company, Ivanka Trump, who is working on a deal with a Japanese government-linked clothing company, to sit in on a meeting with the Japanese Prime Minister. By electing Trump, the Electoral College would effectively be voting for someone who can’t uphold his oath of office.

So there are good reasons from a constitutional standpoint for the Electoral College to not elect Trump. The question is whether that could or would actually happen. It is hard to conceive Republican electors voting for a Democrat as hated as Clinton. The renegade Democratic electors have talked about convincing enough Republicans to vote for a Republican other than Trump to keep Trump under 270 so that the election is thrown to the House of Representatives, but that unlikely scenario would probably just have the outcome of delaying Trump’s election by the House. If the Democrats could actually vote to a person for a different Republican, then they would only need to get 37 Republicans to vote with them in order to elect him. So it’s unlikely.

The threat of violence shouldn’t be used as a reason to refrain from engaging in legitimate democratic actions, but the reality that Trump voters would be extremely angry and likely to cause unrest is certain to cross the minds of even some electors who are sympathetic to the arguments to block Trump.

What the Electoral College movement is doing most of all, even in its failure, is to start a conversation. The Hamilton Electors had to have known it would almost certainly fail, but if they didn’t raise the topic, the country wouldn’t be thinking about what the Electoral College means and whether it serves our purposes. This, combined with various movements towards a popular vote system, could eventually cause reforms in the long term.

If the Electoral College electors aren’t empowered to select a qualified candidate, then what is the point of an Electoral College, after all? The only argument one is left with is that a president should have to win support from a regional coalition. California shouldn’t “decide” our election (just like residents of Chicago, by virtue of its population, “decide” the governor of Illinois, or Taipei “decides” Taiwan’s president), conservatives (who benefit from the system) argue. “Ditching Electoral College would allow California to impose imperial rule on a colonial America,” the Washington Examiner headlined a piece by Michael Barone. What we’re left with is that the residents of a group of underpopulated states out west have a disproportionate impact in “imposing imperial rule on a colonial America.”

Home » The Question Of The Electoral College – OpEd