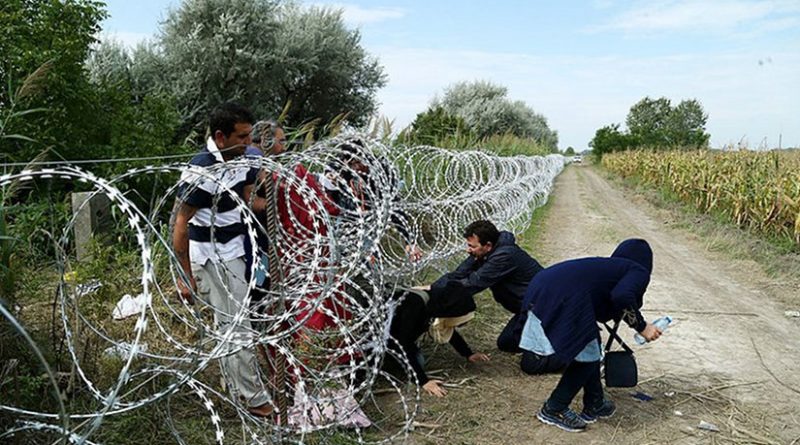 On September 16th, Syrian-born Ahmed Hamed crossed illegally into Hungary as he sought a new residence in the European Union. Hungary had by then already experienced several waves of migrants, many fleeing the chaos produced by US regime change policy in Syria, and the center-right government of Viktor Orban had made the decision to begin protecting Hungarian borders. There were already numerous press reports that among the migrants were an unknown number of terrorists intent on attacking perhaps Hungary and the rest of Europe, so Hungarian caution was hardly an imprudent approach. In all, half a million people illegally entered Hungary earlier this year.

Ahmed Hamed’s method of entry into Hungary, however, is what led to a terrorism conviction in a Hungarian court last month. Facing a newly-built fence on the Hungarian border with Serbia, Hamed began hurling rocks at Hungarian border guards and later donned a loudspeaker to direct others to do the same. It was a sustained violent assault on Hungarian border authorities. Hamed was apprehended and put on trial for committing a terrorist act, a charge allowed by Hungarian law when authorities are physically attacked. He began serving a ten year sentence on Wednesday.

What is unusual about the case is that the US State Department has decided to become involved…on the side of the convicted terrorist!

The State Department issued a statement yesterday urging the Hungarian government to “conduct a transparent investigation, with input from independent civil society groups, into the events at Roszke and to review the cases of Mr. Hamed and those similarly convicted.”

Yes, the State Department has demanded that Hungary — a NATO partner and EU member — consult Non-Government Organizations (NGOs) to see if the case against Hamed can be reduced or overthrown.

Perhaps it is outrageous and excessive for someone attacking border guards while attempting to enter a country illegally to receive a ten year prison sentence? We can turn to the US for an example. In June of this year, a migrant attempting to enter the US illegally from Mexico seized a border patrol agent’s baton and hit the agent with it. Did the border agent consult an NGO for advice? No. He shot him dead.

To the credit of the Hungarian government, foreign ministry spokesman  Tamás Menczer fired back at Foggy Bottom, stating it is…

…strange that the foreign diplomacy of the United States, which regularly lectures the world about the separation of powers, is now urging a government to interfere with a court decision. This might be possible in the United States, but it is not possible in Hungary. …in Hungary, the court, and not so-called civil organizations, decides on the destiny of those who have committed crimes, and this will stay this way, irrespective of whether the US foreign ministry likes it or not.

One thought on “US State Department To Hungary: ‘Let NGOs Decide Terrorism Cases’”