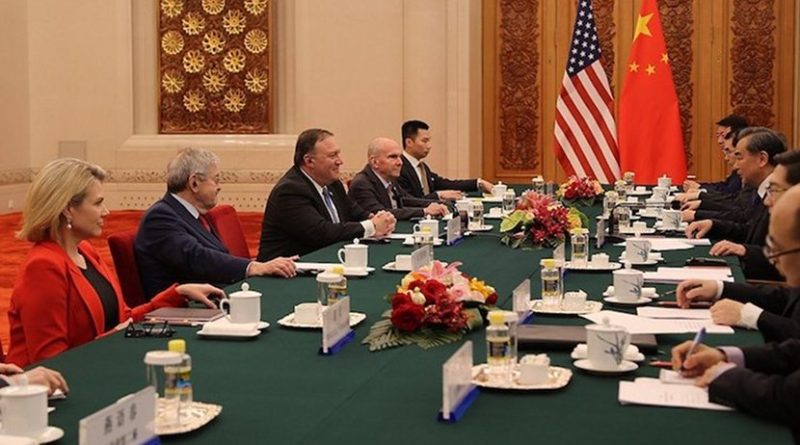 Israel has hailed U.S. President Donald Trump’s announcement that he will nominate former Fox news reporter and current State Department spokeswoman Heather Nauert to be the U.S. ambassador and permanent representative to the United Nations headquarters in New York, according to agencies and The Times of Israel.

Nauert will replace Nikki Haley, the former South Carolina governor who announced in October that she would step down as ambassador at the end of this year.

“Heather Nauert will be nominated,” Trump said on December 7 before leaving the White House on Marine One for an event in Kansas City. “She’s very talented, very smart, very quick, and I think she’s going to be respected by all.”

The Times of Israel writes: “Israeli envoy to the UN Danny Danon welcomed the announcement and paid tribute to Haley who became a darling of the Trump administration and the pro-Israel community for her vociferous defense of the Jewish state at the UN, a body often seen as hostile to Israel.”

“Nauert has stood behind Israel in her previous positions and I have no doubt that the cooperation between our countries will continue to strengthen during her term,” Danon is quoted saying.

“During the last two years we succeeded, through close cooperation in changing the hostile atmosphere in the UN and making unprecedented achievements,” he said.

A former Fox News Channel reporter, Nauert had little foreign policy experience before becoming State Department spokeswoman. If confirmed by the Senate, she would be a leading administration voice on Trump’s foreign policy.

Like Haley, a former South Carolina governor, Nauert would come to the job with little experience in diplomacy, maintains The Times of Israel.

The newspaper points out that President Trump’s announcement about Nauert’s appointment comes hours after a resolution championed by Haley condemning the Hamas failed to pass in the General Assembly. The measure won a large majority, but not enough to secure the two-thirds needed for it to pass. Israeli leaders nonetheless thanked her and feted the results as proof of wide support for Israel’s position.

Haley rattled the United Nations when she arrived in January 2017 vowing that the United States will be “taking names” of countries that oppose Trump’s foreign policy, particularly regarding Israel.

Ahead of the vote, the U.S. ambassador sent a letter to all UN missions to make clear that “the United States takes the outcome of this vote very seriously.”

It was not immediately clear if Nauert would be able to defend Israel in the same powerful way as Haley did. Following the vote, she retweeted a comment by U.S. special envoy Jason Greenblatt condemning the world body’s inability to pass the measure, but did not publicly comment herself, says The Times of Israel.

Other candidates considered for the job, according to Bloomberg, were former White House adviser Dina Powell, ambassador to Canada Kelly Craft and ambassador to Germany Ric Grenell.

Grabbed from Fox by the White House to serve as State Department spokeswoman, Nauert catapulted into the upper echelons of the agency’s hierarchy when Secretary of State Rex Tillerson was fired in March and replaced with Mike Pompeo.

Nauert was then appointed acting undersecretary of state for public diplomacy and public affairs and was for a time the highest-ranking woman and fourth highest-ranking official in the building. She did not have a good relationship with Tillerson and had considered leaving the department.

Her associates said at the time she was surprised by the promotion offer and recommended a colleague for the job. But when White House officials told her they wanted her, she accepted.

In her current job, she has responsibilities far beyond the news conferences she held in the State Department briefing room. She oversees public diplomacy in Washington and all of the roughly 275 overseas U.S. embassies, consulates and other posts. She is in charge of the Global Engagement Center that fights extremist messaging from the Islamic State group and others, and she has a seat on the U.S. Agency for Global Media that oversees government broadcast networks such as Voice of America.

Just 18 months earlier, she wasn’t even in government, notes The Times of Israel.