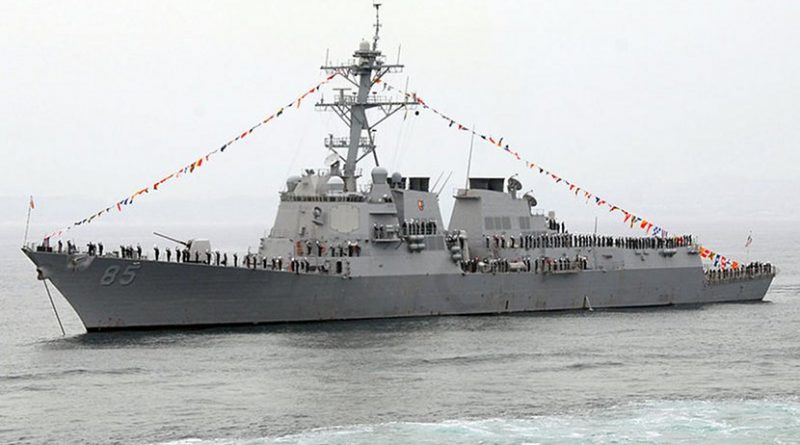 A day or so ago the US Navy sent a guided-missile destroyer into Russian-claimed waters in the Sea of Japan in what it called a “freedom of navigation” operation. The operation comes as the US and Russia are in confrontation over a variety of serious security issues, including Russia’s violation of the terms of the 1987 Intermediate-Range Nuclear Forces Treaty (INF) and Moscow’s operations to control the Sea of Azov and to ultimately control the lands above the Crimea Peninsula.

The USS McCampbell, an Arleigh Burke-class destroyer operating from the US Navy base at Yokosuka, in Japan, sailed near Peter the Great Bay “to challenge Russia’s excessive maritime claims and uphold the rights, freedoms and lawful uses of the sea enjoyed by the United States and other nations.” Russia responded that the USS McCampbell never crossed into Russian waters and the destroyer was under surveillance the entire time. Russia’s concept of maritime property rights is part of Moscow’s belief in extended jurisdiction over seabeds.

A US Navy spokesperson said: “US Forces operate in the Indo-Pacific region on a daily basis. These operations demonstrate the United States will fly, sail and operate wherever international law allows. That is true in the Sea of Japan, as in other places around the globe.”

This idea of “Indo-Pacific” is important to note. US military doctrine toward China and East Asia underwent an upgrade at the Pentagon in May 2018. US Defense Secretary James Mattis announced that Pacific Command would now be the US Indo-Pacific Command to better reflect linkages and values in the region. For the Pentagon, relationships with Pacific and Indian Ocean allies and partners are proving critical to maintaining open and free maritime sea lanes.

Mattis stated that “…over many decades the former Pacific Command adapted to changing circumstance, and today carries that legacy forward as America focuses west.” The idea of “west” is meant to underscore Washington’s growing military relationship with India, which America is working with to counter Chinese maritime influence.

It is significant that as India is seeking to expand its naval “destiny” with a mix of Russian and European-made naval assets, Delhi bumps into Chinese regional interests. Attempting to expand its own interests, commercial activities, and energy goods imports, China has launched the “String of Pearls” project. This is the construction of a web of naval infrastructure, including ports and bases, throughout the Indian Ocean Region (IOR). These activities, along with the arms sales to IOR states, are rousing fears of Chinese control of blue water sea lanes, fueling an old rivalry between India and China.

The US Navy’s freedom of navigation operations have mostly involved making a show of sending ships into contended waters. The US Navy has conducted several such operations in the South China Sea, sailing past islands claimed by China near Gaven and Johnson reefs in the Spratly Islands. Just last week, the US sent the USS Chancellorsville, a guided-missile cruiser, near the Paracel Islands in the South China Sea to similarly challenge China’s maritime domain.

The US Navy has been exercising freedom of navigation numerous times over the past year, which is earning the ire of Beijing. For the Chinese, the US side is posing a grave threat to China’s sovereignty and security, severely damaged relations between the two militaries, and significantly undermined regional peace and stability. China thinks its sovereignty over the islands and their adjacent waters in the South China Sea is indisputable.

Thus, America is conducting freedom of navigation exercises around Russia and China as part of the wider move to protect naval sea lanes in accordance with international maritime law.

What we are seeing is an arc of maritime points that are coming into sharper focus. The Russia-China-India triangle in terms of sea lane security is important because of the interplay in terms of defense sales and technology shared between the three countries. Also, concepts of sovereignty between the countries, although not present in India yet, are strong and thus America is focusing on how the three countries use Belt and Road concepts in terms of sea lane logistics.

Overall, freedom of navigation exercises throughout the Indo-Pacific theater, stretching from Russia to India via many waterways and a few chokepoints, is now part of showing US resolve in terms of open sea lanes. America’s naval operations are supported by a number of countries in the region and thus state sovereignty is respected from this viewpoint. What is more important is that threats of coercion that focus on maritime trade are not rejected on the basis of what Secretary Mattis calls “predatory economics” as there appear to be many “belts and roads” in the Indo Pacific.