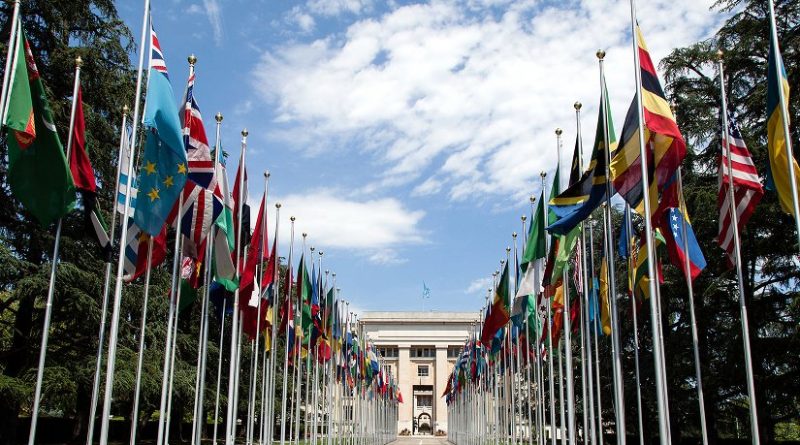 Flags flying at the Allée des Nations in front of the Palace of Nations (United Nations Office at Geneva). Photo by Tom Page, Wikimedia Commons.

Steven Bannon, the man behind the nationalist policy in the Trump administration, is quoted as saying, “I think strong countries and strong nationalist movements in countries make strong neighbors. And that is really the building blocks that built Western Europe and the United States, and I think it’s what can see us forward”.

It is true that Nationalism was born in Europe, and is the foundation of the new modern state. However, what Bannon’s remarks miss is the fact that strong nationalist movements in Europe helped lead to the outbreak of World War I and World War II. It has also contributed to a great deal of strife and death in the Middle East.

Before the late 18th century there were no real nation states. Neither passports nor borders as we know them existed. People had ethnic and cultural identities, but these did not really define the political entities in which they lived. In 1800, almost nobody in France thought of themselves as French. At the time of the French Revolution in 1789, half its residents did not speak French.

Nationalism did not develop among the general population, it was a construct first developed among the intellectual elites of Europe. Johann Gottfried Herder, a German philosopher who believed that language determined national thought and culture, first coined the term “nationalism”. Nationalists expected patriots to then learn their nation’s language and raise their children speaking that language as part of a general program to establish a unique national identity. Poets and philosophers created folk epics and fairy tales, these epic legends and constructed narratives created imagined communities that gave rise to a sense of delusional, inflated self-worth. English Nationalists argued that England is the kingdom that, of all the kingdoms in the world, is the most like the kingdom of Jesus Christ. And the French believed that France had a special mission as representative of the most advanced form of western culture.

The idea that the boundaries of a nation should, as much as possible, coincide with only one culture, and the belief that a people who share a common language, history, and culture should constitute an independent nation set the stage for decades of war and border disputes on the European continent. The history of Alsace Lorraine is a microcosm of the turbulent years of nationalism in Europe and the rivalry between French and German nationalism. The area was a watershed for invading French and German armies and mutual annexation. The Germans pursued a Germanification policy in the Alsace that prohibited its residents from speaking French in public. A person could be fined even for something as innocent as saying, “bonjour”. Street signs, once displayed in French, were replaced with German signage. When the French annexed the Alsace, up to 100,000 Germans were expelled and German language Alsatian newspapers were suppressed.

The zeal of nationalism in Europe and the need to define an identity for these nations states culminated with the Nuremberg law. It added a racial element to the concept of nationalism, and ultimately contributed to the rise of Nazi Germany and the outbreak of World War II.

By the end of the 19th century, as the sun was setting on the Ottoman Empire, Zionists, who were primarily European Jews, worked to create a homeland for the Jewish people in Palestine. Young Turks, eager to modernize their state, and young Arabs intellectuals primarily from the Levant who also wanted to emulate the modernity of Europe embarked on a nation building quest of their own, all with irreconcilable claims and overlapping aspirational maps. This was the framework that set the stage for the endless conflicts in the Middle East that continue to plague the region. Today Kurdish nationalists are trying to establish their own nation state from parts of Turkey, Iraq, Iran and Syria. Their ambitions have added another layer of complexity to an already intractable situation.

The trauma of the great depression, the threat of communist revolution, the rise of fascism and the ravage of World War II, made Europe search for an alternative to nationalism.

The search for a new framework for Europe was led by Jean Monnet and Robert Schuman. They worked to enmesh the economies and societies of Western Europe with one another. These new transnational ties were expected to create a permanent peace between France and Germany. The road to building this new post nationalist space that culminated in the creation of the European Union, was arduous. Many European politicians resisted the notion of ceding sovereignty to a supra nationalist entity. The project, however, achieved is intended objective, and Europe has enjoyed the longest period of peace in its modern history. In the mid 1970s, just 22% of Germans thought they had more in common with other Germans of different social class then with Frenchmen of the same class (Haas 1997). And Alsace is now a multi-lingual region, its inhabitants shop and work in both France and Germany. In the words of Angela Merkel, “The Europe that suffered from German hubris was transformed into a ring of friends organized around NATO and the E.U.”

The European post-nationalist experiment was not without its flaws. It seeded too many controls to Brussels. Like most hierarchical systems it became top-heavy, and incapable of responding to change. In addition, there were structural flaws in the way the Euro was established adding layers of popular resentment against the European project.

While Europe is grappling with reforms of its current framework and fending off rising nationalism, the Middle East is still in the thrall of its failed nationalist experiment, increasingly chaotic, with rising religious extremism and terrorism.

How should the people of Europe and the Middle East organize themselves to achieve peace, stability and economic growth? Today, questions of identity, complexity and polity are the subject of research and a new field of study by complexity theorists, social scientists and historians. They believe that to have a peaceful world it may not be necessary to abolish the nation state as it remains the most effective body to write and enforce the rules, just to deemphasize it. What we need, they argue, are multicultural states with overlapping authorities, divided sovereignty, fuzzy borders, and the distribution of power to local communities.

Home » Nationalism Between Europe And The Middle East – OpEd