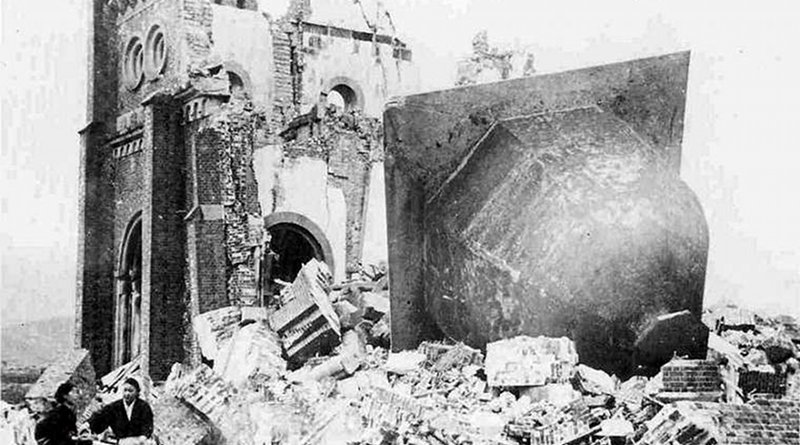 An Ohio college is returning to Nagasaki’s Immaculate Conception Cathedral a wooden cross that was recovered from the cathedral’s remains after the Aug. 9, 1945 atomic strike on the city.

“Very few artifacts from the cathedral were retained and that’s why it’s crucial to give back that cross, which is so deeply tied to their identity,” Maus said, according to Wilmington College, a Quaker liberal arts institution in Wilmington, Ohio,

The return is being made as an “international goodwill gesture of peace and reconciliation.”

Maus said that “this is something we need to do. These are connections that help build a more peaceful world.”

The only wartime use of nuclear weapons took place in 1945’s Aug. 6 attack on Hiroshima and Aug. 9 attack on Nagasaki by the United States.

The Hiroshima attack killed around 80,000 people instantly and may have caused about 130,000 deaths, mostly civilians. The attack on Nagasaki instantly killed about 40,000, and destroyed a third of the city, the BBC reports.

The attacks took a heavy toll on all of Japan’s population, but Nagasaki was a historic center of Catholicism since European missionaries such as St. Francis Xavier arrived in the 16th century. After Japan’s rulers closed the country, in part due to fears of foreign domination, Japanese Catholics survived centuries of persecution before their freedom of religion was secured again in the 19th century.

Immaculate Conception Cathedral, built between 1895 and 1925, was destroyed when the atomic bomb fell detonated fewer than 2,000 feet away. A rebuilt cathedral, the present-day structure, was completed in 1959.

“Catholics were actually worshipping in Nagasaki, in the cathedral, at the time the atomic weapon was dropped. All of the people in the cathedral were instantly killed,” Maryann Cusimano Love, an international relations professor at the Catholic University of America, told CNA in 2015.

According to Maus, the cross was retrieved from the cathedral’s ruins by Walter Hooke, a Catholic and a US Marine stationed in Nagasaki, who sent it to his mother.

Hooke donated the cross in 1982 to the Peace Resource Center, which houses reference materials related to the atomic bombings of Hiroshima and Nagasaki.

Maus decided to return the cross after learning that a group from Nagasaki had been trying to locate it.

The cross will be displayed in the cathedral.