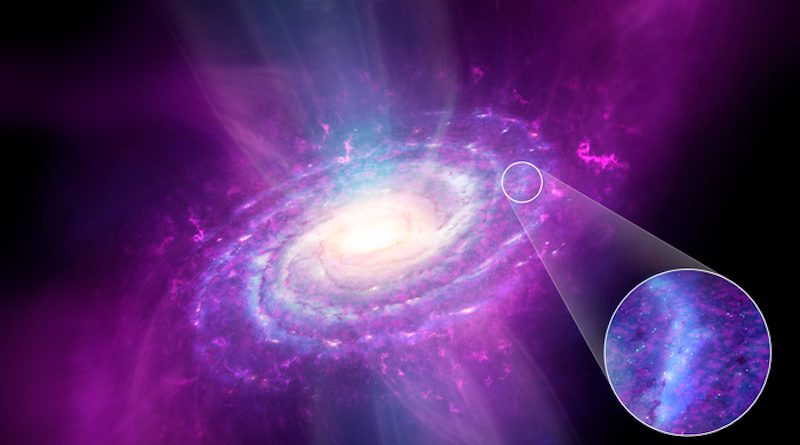 Clouds and streams of cosmic pristine gas (magenta) accrete onto the Milky Way, but this gas does not efficiently mix in the Galactic disk, as highlighted for the Solar neighborhood (zoom-in). CREDIT: © Dr Mark A. Garlick

n order to better understand the history and evolution of the Milky Way, astronomers are studying the composition of the gases and metals that make up an important part of our galaxy. Three main elements stand out: the initial gas coming from outside our galaxy, the gas between the stars inside our galaxy – enriched with chemical elements –, and the dust created by the condensation of the metals present in this gas. Until now, theoretical models assumed that these three elements were homogeneously mixed throughout the Milky Way and reached a level of chemical enrichment similar to the Sun’s atmosphere, called the Solar metallicity. Today, a team of astronomers from the University of Geneva (UNIGE) demonstrates that these gases are not mixed as much as previously thought, which has a strong impact on the current understanding of the evolution of galaxies. As a result, simulations of the Milky Way’s evolution will have to be modified. These results can be read in the journal Nature.

Galaxies are made up of a collection of stars and are formed by the condensation of the gas of the intergalactic medium composed of mostly hydrogen and a bit of helium. This gas does not contain metals unlike the gas in galaxies – in astronomy, all chemical elements heavier than helium are collectively called “metals”, although they are atoms in gaseous form. “Galaxies are fuelled by ‘virgin’ gas that falls in from the outside, which rejuvenates them and allows new stars to form”, explains Annalisa De Cia, a professor in the Department of Astronomy at the UNIGE Faculty of Science and first author of the study.  At the same time, stars burn the hydrogen that constitutes them throughout their life and form other elements through nucleosynthesis. When a star that has reached the end of its life explodes, it expels the metals it has produced, such as iron, zinc, carbon and silicon, feeding these elements into the gas of the galaxy. These atoms can then condense into dust, especially in the colder, denser parts of the galaxy. “Initially, when the Milky Way was formed, more than 10 billion years ago, it had no metals. Then the stars gradually enriched the environment with the metals they produced”, continues the researcher. When the amount of metals in this gas reaches the level that is present in the Sun, astronomers speak of Solar metallicity.

A not so homogeneous environment

The environment that makes up the Milky Way thus brings together the metals produced by the stars, the dust particles that have formed from these metals, but also gases from outside the galaxy that regularly enter it. “Until now, theoretical models considered that these three elements were homogeneously mixed and reached the Solar composition everywhere in our galaxy, with a slight increase in metallicity in the centre, where the stars are more numerous”, explains Patrick Petitjean, a researcher at the Institut d’Astrophysique de Paris, Sorbonne University. “We wanted to observe this in detail using an Ultraviolet spectrograph on the Hubble Space Telescope.”

Spectroscopy allows the light from stars to be separated in its individual colors or frequencies, a bit like a with prism or in a rainbow. In this decomposed light, astronomers are particularly interested in absorption lines: “When we observe a star, the metals that make up the gas between the star and ourselves absorb a very small part of the light in a characteristic way, at a specific frequency, which allows us not only to identify their presence, but also to say which metal it is, and how abundant it is”, he continues.

A new method developed to observe the total metallicity

For 25 hours, the team of scientists observed the atmosphere of 25 stars using Hubble and the Very Large Telescope (VLT) in Chile. The problem? The dust cannot be counted with these spectrographs, even though it contains metals. Annalisa De Cia’s team has therefore developed a new observational technique. “It involves taking into account the total composition of the gas and dust by simultaneously observing several elements such as iron, zinc, titanium, silicon and oxygen”, explains the Geneva researcher. “Then we can trace the quantity of metals present in the dust and add it to that already quantified by the previous observations to get the total.”

Thanks to this dual observation technique, the astronomers have found that not only is the Milky Way’s environment not homogeneous, but that some of the areas studied reach only 10% of the Solar metallicity. “This discovery plays a key role in the design of theoretical models on the formation and evolution of galaxies”, says Jens-Kristian Krogager, researcher at the UNIGE’s Department of Astronomy. “From now on, we will have to refine the simulations by increasing the resolution, so that we can include these changes in metallicity at different locations in the Milky Way.”

These results have a strong impact on our understanding of the evolution of galaxies and of our own in particular. Indeed, metals play a fundamental role in the formation of stars, cosmic dust, molecules and planets. And we now know that new stars and planets could be formed today from gases with very different compositions.