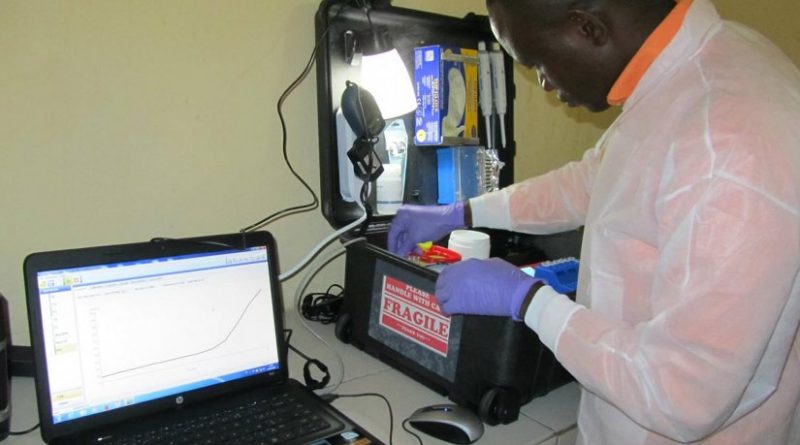 The Ebola rapid-detection mobile suitcase being used in Guinea. Credit: University of Stirling

A rapid-detection Ebola test developed by international scientists including a University of Stirling, Scotland virologist has been deployed following a highly effective pilot project.

Dr Manfred Weidmann, from the University’s School of Natural Sciences, was part of a Wellcome Trust project led by the Pasteur Institute of Dakar.

Together, they developed a sophisticated point-of-care saliva test, all contained within a suitcase-sized mobile laboratory. Three mobile labs are now deployed in Senegal and Guinea and a test evaluation of 928 samples showed it performs exceptionally well under field conditions.

“There are more than 25 laboratories in West Africa and everyone is using different tests,” said Dr Weidmann. “Ours, which uses a method called recombinase polymerase amplification, was compared to two other tests and results show it can be reliably used without the need for a confirmatory test, and it appears to outperform a widely used WHO recommended test.

“There has been a huge push for robotic testing systems, but they are difficult to establish and expensive to maintain. Our project has successfully developed and deployed a low cost mobile laboratory using a rapid, highly sensitive and specific assay which can be stored at room temperature and operated by local teams with its own energy supply.”

Dr Weidmann has also developed a range of assays to detect other mosquito borne viruses, such as Dengue virus and Rift Valley Fever virus.

He added: “Mosquito-borne viruses can affect high numbers of people much faster than Ebola and outbreaks of Dengue virus and Rift Valley Fever virus have recently erupted in West-Africa.

“The system represents real progress in the quest to take the laboratory into the field. Our molecular test platform can be adapted to other infectious agents so these mobile laboratories are a sustainable solution for diagnosis of infectious disease in the region and elsewhere. They will remain in Guinea and Senegal to be used after all the expert teams which have provided laboratory testing in the Ebola disease crisis have left.”

The research results are published in the European Centre for Disease Prevention and Control (ECDC) journal Eurosurveillance.

The research was supported by the German Primate Centre; the Robert Koch Institute in Germany and Biocompanies Qiagen Lake Constance and TwistDx and the mobile laboratory was deployed in collaboration with the Laboratory for Hemorrhagic fever of Guinea at Donka hospital and the National Public Health Institute of Guinea.