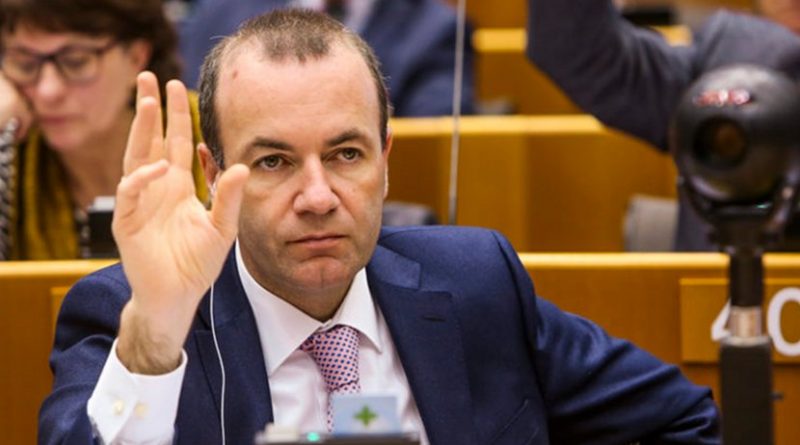 The head of the EPP group, Manfred Weber. [European Parliament]

By Samuel Stolton with Gerardo Fortuna

(EurActiv) — German Manfred Weber was crowned Spitzenkandidat of the EPP, the European Parliament’s largest party, on Thursday (8 November), after he swept to victory in a contest that saw ex-Finnish Prime minister Alexander Stubb win only 20 percent of the votes.

The question on everyone’s lips was how likely the European Council is to endorse Weber as the next Commission president. Weber himself appeared less worried.

“I am elected by the largest political family as the top candidate,” he said after the vote, adding that the choice of the next commission president is in the hands of European voters.

“I cannot imagine that someone in the European Council says afterwards, ‘I don’t care what the outcome was of the European elections.’”

Weber secured 492 votes at the EPP congress in Helsinki, while Stubb was well behind on 127.

Just before the result was released, German Chancellor Angela Merkel, who recently announced her intentions to stand down at the end of her current mandate, said her “heart lies with Manfred Weber.”

With the backing of the EPP’s German delegates, Weber’s fate was always in good hands.

Professor Steven Van Hecke of the University of Leuven, who was in Helsinki to follow the events, believes Weber may still find it difficult to solicit the support of the European Council. The Council will approve one of the lead candidates from the European political parties as the next Commission president.

The Council’s decision, as outlined in the Treaty of Europe, will take into account the results of the European elections.

Speaking to EURACTIV, Van Hecke said there was the chance that Weber may be ‘brought off’ with a lesser institutional role other than the commission presidency.

“Macron will find it very difficult to get behind the idea of a German commission president,” Van Hecke said.

“A Stubb-like candidate would have been easier to digest for the French presidency.”

However, if the council were to divert from the Spitzenkandidaten process, another figure is emerging as the dark horse in the race: Michel Barnier.

The chief Brexit negotiator took to the stage immediately after the final pitches on Thursday morning from Weber and Stubb.

He cut a stately figure, highlighting in confident terms the fact that EPP will be tested in next year’s elections and that it is of vital importance for Europe’s largest party to start making progress now.

“We will win this election,” he said.

Van Hecke said Barnier is much more likely to be favoured by Macron than Weber is. He noted that although the Frenchman has ruled himself out of the Spizenkandidaten race, he has not specifically said that the top job in the Commission is off the table.

Federico Ottavio Reho, a researcher at the Wilfried Martens Centre for European Studies [an EPP-affiliated think tank] told EURACTIV  that the Council would be unwise not to take into account Weber’s broad support across the continent.

“Theoretically, anything is possible,” he said. “But it will be very difficult for the Council to turn away from the mandate that Weber has won inside the EPP, and potentially, from the people of Europe. I would say that it’s pretty likely that Weber would receive Council approval after next year’s European elections.”

Weber’s future challenges, Reho said, would first be to achieve a good majority in the European Parliament, and then to convince the Council of his adequacy for the EU top job.

However, with polls suggesting a loss of seats for EPP, they might have to consider the necessity of forming a coalition.

“Our aim is to get the biggest group, to be the leading force, then we will have to sit with other parties,” Weber said.

“But let me be clear: being the majority party means having a mandate.”

Weber’s attention must now turn to Hungary’s Fidesz, and the decision as to whether they should be allowed to stay members of the EPP after a series of alleged breaches of EU law.

Whilst Weber gave no significant indication as to his own position on the matter, he did acknowledge that this was something he will “work on.”

Nevertheless, some in Brussels deem Weber’s ambivalent stance on the subject to be damaging to the future of the EU.

Shada Islam, director of Europe and geopolitics at Friends of Europe, told EURACTIV:

“I worry that Weber may not be able to bring anything new or fresh in the face of the rapidly changing European and global landscape.”

“One of the biggest challenges of the EPP right now is how to handle Orban’s party, Fidesz – and so far, Weber has been unwilling to elaborate on whether he supports expelling it from the EPP.”

EURACTIV caught up with Alexander Stubb shortly after his loss was announced.

“I’m happy with the result. I think it was great to be able to defend EU values and I’m really happy for Manfred as well. He did a good job,” he said, putting on a brave face after the loss in his home country, with a margin that even Weber’s core fanbase had not predicted.

As the Finn had referenced in his closing pitch, the campaign for the leadership of the EU’s biggest party ahead of May 2019’s European elections was characterised by its good nature and ‘gentlemanly’ conduct.

During Thursday’s pitches, Weber came out with more vigour, speaking of the importance of having strict border controls, having an external frontier to the EU in which “nobody can enter without a passport” – music for the ears of the growing populists camp in Europe.

He added that Turkey would never be able to become a member of the European Union under his presidency and that the future of the union is “not only about innovation,” but the ambitions of the continent must be to “make a Europe that we can be proud of.”