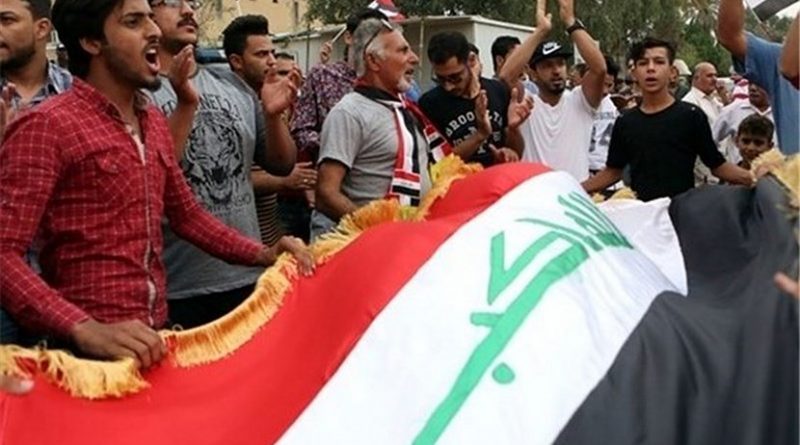 Events across the Levant, in Lebanon, Syria and Iraq, are of unique historical importance. What is occurring now is unlike the so-called Arab Spring. What is instead occurring is an uprising against an old order, in which the melting away of confessional governance is key. And that governance is infected by Iran.

What appears to be a tectonic shift is altering many factors, with the primary driver being those who are fed up with what is seen as the old order’s greed, influence and violence. A main target across both Lebanon and Iraq is Iran, and deservedly so. Iran’s ally in Lebanon, Hezbollah, is facing a real challenge to its authority. When residents, for example, of Beirut’s Hezbollah-controlled neighborhood of Dahiyeh march in anti-government demonstrations, there is definitely change afoot. The optics have shocked Tehran’s security establishment.

The burning of portraits of Iranian figures in both Lebanon and Iraq, plus the raiding of an Iranian consulate and the actions in holy cities such as Karbala and Najaf, come at a critical moment. The centrality of the Iranian regime and the Quds Force under Qassem Soleimani, which are now executing retaliatory plans such as snipers in Baghdad and other Iraqi cities, is a key indicator of what comes next, regardless of the demands of some Iraqi Shiite politicians. Importantly, however, secular Shiites and non-secular Shiites are joining together and supporting the anti-Iranian fervor.

In Lebanon, Hezbollah may or may not be on its own in terms of finances, since the revolution led to the collapse of the government, which is now fighting over what comes next. Banks are open but, with reports of bankruptcy within four months, the clock is ticking. For now, the US withholding millions of dollars in aid is a pressure tactic that can be used to influence Lebanese elites to transform their system of governance. This effort also involves other countries pressing for the system of personal enrichment to stop and the banking system to be “cleaned up.” For Hezbollah’s assets, this issue is an attack on their financial system.

Importantly, Iran, despite its current woes, may face a sudden boon. With the drawdown in Yemen, Iran can focus on the Levant. Given that, in both Lebanon and Iraq, the issue of Iran’s influence is a major driver against the current order, reversing this trend will continue to be very hazardous for many local interests.

These events are distinct from those in North Africa and are not an Arab Spring, but rather perhaps the first time these countries are seeing the potential to shift or transform their societies away from the current economic and social trap that their citizens face. The confessional landscape within this mix desperately needs to reorganize, reshape or fade away. In the Levant, the fracture is more significant than the events in North Africa.

Syria’s crucial challenge is its intersection with Turkey’s “Operation Peace Spring.” This operation is significant in terms of the ongoing wider shift. Turkey’s neo-Ottomanism, as defined by regional observers, is beginning to show in its tactics, which are creating hundreds of thousands more internally displaced persons, who Turkish President Recep Tayyip Erdogan has said more than once could end up terrorizing Syria’s neighbors.

This type of rhetoric is dangerous and feeds into how post-Al-Baghdadi Daesh will direct its focus. The new leader appears to be following his predecessors and what comes next will add to the complexity in the region. Syria’s Bashar Assad faces a challenge in this environment not only from Daesh, but also any spillover effects from Lebanon and Iraq. The confessional struggle reshaping the Levant may bring undesirable elements to the stable parts of Syria.

Russia, which is now conducting joint patrols with Turkey in northeastern Syria, is facing off against 500 heavily armed American troops who are building a small air hub network. This shifting environment on the ground in Syria adds to this unique moment, when a sudden shift could bring about a different outcome, benefiting some and omitting others. Russia recognizes what is going on and is working on a strategy to contend with America’s Syrian plays, while contending with a shifting situation across the Levant.

In a sense, these Levantine events may become more of a drag for Moscow’s policy efforts in the future and may stretch Moscow’s requirements in its other growing spheres of influence.

Tectonics is about movement on an epic scale. Across the Levant, the shifting landscape will register on the historical Richter scale.