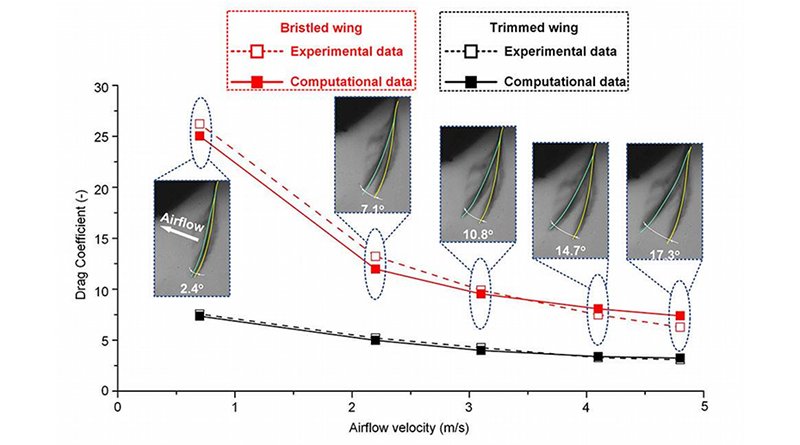 Comparison of the drag coefficient between the experimental measurement and computational analysis. Variation in the deflection angle of the bristled wing with the airflow velocities of 0.7, 2.2, 3.1, 4.1 and 4.8 meters per second. CREDIT: Yonggang Jiang/Beihang University

Thrips are tiny insects 2 millimeters long, about as long as four human hairs are thick. Thrips are known for their unwelcome ability to devour garden plants and, lately, to inform the design of microrobotics.

Unlike larger insects, birds, and airplanes, thrips don’t rely on lift in order to fly. Instead, the tiny insects rely on a drag-based flight mechanism, keeping themselves afloat in airflow velocities with a large ratio of force to wing size. Wind is proportionally stronger when you are a tiny insect with wings that measure on the microscale.

The leading-edge vortex is remarkably defused at such a tiny size, so little lift force can be generated. Author Yonggang Jiang explained the cause of this is the ultralow Reynolds number, which is a ratio between inertial and viscous forces in a fluid, such as the air.

While model-based studies have confirmed a drag-based mechanism for tiny insects, models aren’t biologically faithful. A thrip’s wing can have between 45 and 120 hairlike bristles extending from the wing membrane.

Despite the increasing precision of microelectromechanical systems, prior studies risked inaccurate calculations of drag force, because they did not include the length, angle or number of bristles.

In a study published this week in the Journal of Applied Physics, from AIP Publishing, researchers performed the first test of the drag force on an actual thrip’s wing under constant airflow in a bench-top wind tunnel. Drawing from experience in microfabrication and nanomechanics, Jiang created an experiment in which a thrip’s wing was glued to a self-sensing microcantilever that uses piezoresistors to take voltage measurements that are used to calculate the drag force on the wing.

The study served to quantify the aerodynamic characteristics of the wings, closely examining how much air leaks through the bristled wing and how airflow leakiness affects the drag force per unit area. The natural bristled design could be useful in designing tiny flying or swimming robots, Jiang said, as well as flow sensors and gas sensors, in which a bristled structure could increase sensitivity.

The authors plan to further explore using a microcantilever to study the thrip’s flight mechanism and the kinematics of the wing, including the angle of attack, the various angles at which a thrip can position its wing, and how that affects the drag force in flight.