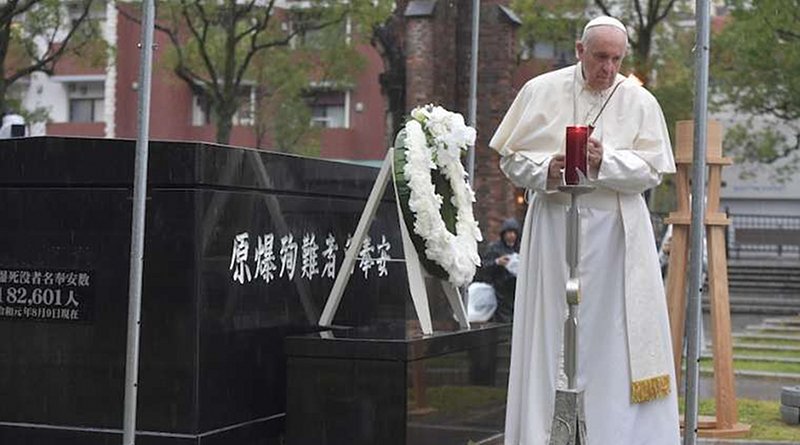 The news that found surprisingly no mention in the Indian media was Pope Francis’s visit to Japan in late November 2019 when he moved past the position of his predecessors and openly denounced nuclear weapons and questioned nuclear power, terming it as a “crime against the dignity of human beings”. The Pope also travelled to the atomic-bombed cities of Hiroshima and Nagasaki and spoke to atomic bomb survivors as well as people who had experienced the 2011 earthquake, tsunami and nuclear meltdown that crippled the Fukushima Daiichi Plant in northern Japan.

It may be recalled that the so-called triple-disaster in March 2011, the earthquake and tsunami killed 18,000 people and led to the nuclear meltdowns at Fukushima Daichi that ravaged the northeastern Japan. After hearing from three survivors, Francis talked about the people “who lived in the affected areas” and who “now feel forgotten by others,” and “must face ongoing problems: contaminated land and forests and the long-term effects of radiation.” Francis further observed: “In addition to scientific or medical concerns, there is also the immense challenge of restoring the fabric of society. Until social bonds in local communities are re-established, and people can once more enjoy safe and stable lives, the Fukushima accident will not be fully resolved”. As a consequence of this, concern about the continuing use of nuclear power turned to demand for the complete abolition of nuclear power and shut down of nuclear power plant.

The last papal to visit Japan was by John Paul II 38 years ago. Francis went further than his predecessors on the nuclear weapons issue. He wanted for the end of stockpiling of nuclear weapons. An article in the New York Times noted that that Francis “edged close” to denouncing the energy source altogether and warned of ‘selfish decisions’ on nuclear energy. Francis was concerned that Japan experienced the worst nuclear disaster since Chernobyl but has yet to determine a viable alternative for its energy needs,

Japan has a tiny and shrinking Catholic population but the Pope drew thousands of people to his appearances in Nagasaki and Hiroshima, where he called for an end to the nuclear arms race. In denouncing any use of atomic weapons as “a crime not only against the dignity of human beings but against any possible future for our common home,” he appeared to go further than his predecessors, who called for an end to stockpiling nuclear arms.

Unfortunately, the arms race wastes precious resources which could be better used to benefit the integral development of peoples and to protect the natural environment. For the record, when the US dropped the first ever nuclear bomb in history on August 9, 1945 in the Japanese city of Hiroshima, it killed 140,000 people within minute and further 74,000 people perished when a second nuclear bomb was dropped in the city of Nagasaki three days later. Ever since, nuclear issue has emerged as a contentious issue that has engaged many nations in the world on how to check the misuse of this destructive weapon system.

In a world with serious inequalities, while the rich continue to prosper, there are millions of children and families live in inhumane conditions. Instead of the money being used to ameliorate the conditions of such deprived segment of the humanity, nations continue to squander the fortunes made through the manufacture, upgradation, maintenance and sale of ever more destructive weapons. This is truly unfortunate.

The New York Times report said that Nagasaki, a port city that first had contact with European explorers in the 1500s, is the center of Catholic life in Japan, although the observant population in the country has fallen to just over 450,000, a tiny minority in a nation of 126 million people. The vast majority of religious Japanese are either Buddhist or Shinto, with many practicing elements of both. Catholics have a history of being ostracized for their faith in Japan, and 26 Christians who were executed in the late 16th century under orders from the warlord Hideyoshi Toyotomi are commemorated in a monument in Nagasaki.

Nagasaki is the cultural hub of Japan’s small Catholic population. When a US B-29 bomber dropped an atomic bomb in the vicinity of Urakami Cathedral of Nagasaki, then the largest cathedral in East Asia, it killed about 8,000 Catholics in the area. There Francis spoke to about 35,000 people in a baseball stadium next to the sculpture of the Virgin Mary that was found in the runs of the Urakami church. The last pope to visit Japan, John Paul II in 1981, also visited Nagasaki and Hiroshima, where he warned of the dangers of nuclear power and said the suffering from the atomic bombings persisted. This time around, Francis also addressed the deterioration of international ties at a time when populist governments and leaders have taken to looking inward. The worrying aspect is that the world is witnessing an erosion of multilateralism, “which is all the more serious in light of the growth of new forms of military technology”.

In Tokyo, the pope met with the newly enthroned emperor, Naruhito, and Japan’s prime minister, Shinzo Abe. Before an audience of about 50,000 people, he said Mass at the Tokyo Dome, home of the Yomiuri Giants baseball team. He described the disconnectedness of a group of young people he had met at St. Mary’s Cathedral in Tokyo. Francis bemoaned that home, school and community, which are meant to be places where mutual support is extended to one another are “being eroded by excessive competition in the pursuit of profit and efficiency”. For the Pope, the trip to Japan, which followed a three-day visit to Thailand, was in some ways the fulfillment of a long-ago ambition. As a young Jesuit in Argentina, he had hoped to be sent on a mission to Japan, but a bout of life-threatening pneumonia thwarted the trip.

Five and a half years after the Fukushima Dai-Ichi Nuclear Power Plant Disaster, the Catholic Bishop’s Conference of Japan in November 11, 2016 has called for the abolition of Nuclear power generation in Japan. Following the tsunami caused by the Great East Japan Earthquake of March 11, 2011 that resulted in a disaster at the Tokyo Electric Power Company’s Fukushima Dai-Ichi nuclear power plant and eight months later, on November 8, 2011, the Catholic Bishops’ Conference of Japan issued a message in Sendai, Miyagi Prefecture, addressed to all the people of Japan, entitled “Abolish Nuclear Power Plants Immediately: Facing the Tragedy of the Fukushima Dai-Ichi Nuclear Plant Disaster.” Explaining its concern from a Catholic viewpoint the danger of nuclear power generation, it called for its complete abolition. Indeed Japan is subject to many severe earthquakes with the attendant danger of large-scale tsunamis, and therefore the conference concluded that the immediate cessation of all nuclear power generation in the country is imperative.

While it could look unusual for the bishops’ conference of a single country to direct a statement to the entire world, what Japan experienced since the Fukushima disaster convinced the conference organizers to inform the world of the hazards of nuclear power generation and therefore appealed for its abolition.