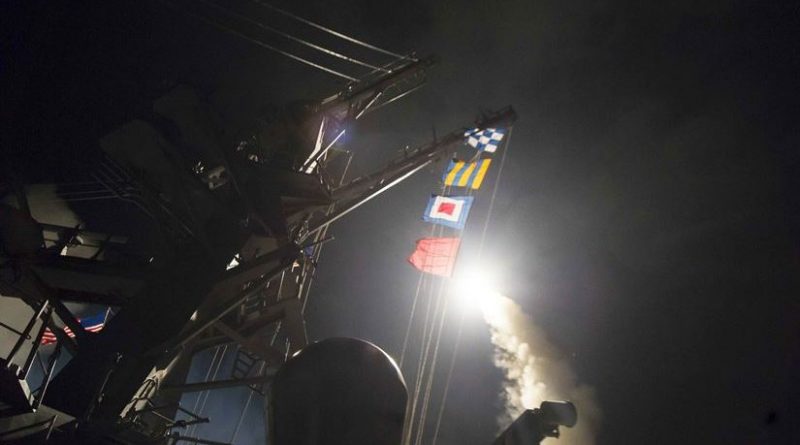 The meaning conveyed by those cunningly crafted caricatures was to show that Trump lacks the intelligence to think for himself and that he is being dictated by Putin and Bannon. Those caricatures must have affronted the vanity of Donald Trump to an extent that after that, he has become cold towards Putin and has recently removed Bannon from the National Security Council.

Donald Trump is an overgrown child whose vocabulary does not extends beyond a few words like “amazing” and “tremendous,” and whose frequent spelling mistakes on his Twitter timeline like “unpresidented” have made him a laughing stock for journalists and academics alike. It is very easy for the neuroscientists on the payroll of corporate media to manipulate the minds of such puerile politicians and to lead them by the nose to toe the line of political establishments, particularly on foreign policy matters.

It is not a coincidence that only a day before an international conference on Syria was scheduled to be held in Brussels, a chemical weapons’ attack took place in Khan Sheikhoun in Idlib governorate which was blamed on the Syrian government by the mainstream media.

Similarly, it is not a coincidence that the Obama Administration’s proverbial “Red Line” has been crossed in Syria only a day after a breaking news made the headlines that the editor-in-chief of Lebanon’s al-Akhbar newspaper, Ibrahim al-Amin, had revealed in his recent editorial [1] that Tulsi Gabbard, the United States Representative for Hawaii whose trip to Syria in January and meeting with Bashar al-Assad was widely reported in media, had conveyed President Trump’s offer of cooperation to Assad during the meeting.

Apart from Tulsi Gabbard, the US ambassador to the UN, Nikki Haley, and the Secretary of State, Rex Tillerson, have also stated on the record [2] recently that defeating the Islamic State in Syria and Iraq is the first priority of the Trump Administration and that the fate of Bashar al-Assad is of least concern to the new administration.

In a dramatic turn of events after the chemical weapons’ attack, however, the US has launched 59 Tomahawk cruise missiles on al-Shayrat airfield in Homs governorate from where the Syrian plane apparently flew to the chemical weapons’ strike site in Khan Sheikhoun. And Secretary Tillerson said the US has a “very high level of confidence” that the Syrian regime has carried out at least three attacks in recent weeks, including on Tuesday, using Sarin and nerve gas.

Unlike dyed-in-the-wool politicians, like Barack Obama and Hillary Clinton, who cannot look past beyond the tunnel vision of political establishments, it appeared that Donald Trump not only follows news from conservative mainstream outlets, like Fox News, but that he has also been familiar with alternative news perspectives, such as Breitbart’s, no matter how racist and xenophobic.

Thus, Donald Trump is fully aware that the conflict in Syria is a proxy war initiated by the Western political establishments and their regional Middle Eastern allies against the Syrian government. And he is also mindful of the fact that militants are being funded, trained and armed in the training camps located in the Turkey-Syria border regions to the north of Syria and the Jordan-Syria border regions to the south of Syria.

Moreover, isn’t it ironic that when the “visibly moved and tearful” Donald Trump appeared on television to make a historic statement after the chemical weapons’ attack that “the attack has crossed a lot lines for me,” he was standing next to King Abdullah of Jordan who has been instrumental in creating a carnage in Syria that has claimed hundreds of thousands of innocent lives and displaced half of Syrian population?

According to an informative December 2013 report [3] from a newspaper affiliated with UAE’s government which takes the side of Syrian opposition against the Syrian government, it is clearly spelled out that Syrian militants get arms and training through a secret command center based in the intelligence headquarters’ building in Amman, Jordan that has been staffed by high-ranking military officials from 14 countries, including the US, European nations, Israel and the Gulf Arab States to wage a covert war against the government in Syria.

Thus, compared to the conventional attitude of the globalists, for an anti-status-quo administration that promised reforms and a radically different approach to foreign affairs during the election campaign, Donald Trump has let down his Alt-Right electoral base by conducting cruise missile strikes in Syria and by adopting the militarist tone and tenor of his interventionist predecessors.

As I have already mentioned that lack of understanding is not a factor here. Donald Trump is mindful of the ground realities of the Syrian theater of proxy wars. More than realization, it was required of him to take a moral stand on his principles. But expecting from a morally weak and impotent old fart to stand by his principles, who was in the habit of grabbing Miss Universe pageants by their genitals and who was fond of watching prostitutes perform “golden shower” in the presidential suites of Moscow’s five-star hotels, is a bit naïve.

The Trump Administration is fully aware that a covert war is being waged against the Shi’a-dominated regime by the latter’s regional foes. America’s interest in the Syrian proxy war is partly about ensuring Israel’s regional security and partly about doing the bidding of America’s regional, Sunni allies: Turkey, Jordan and the Gulf Arab States.

Saudi Arabia which has been vying for power as the leader of Sunni bloc against the Shi’a-dominated Iran in the regional geopolitics was staunchly against the invasion of Iraq by the Bush Administration in 2003. The Baathist regime of Saddam Hussein constituted a Sunni Arab bulwark against Iran’s meddling in the Arab World.

But after Saddam was ousted from power in 2003 and subsequently elections were held in Iraq which were swept by Shi’a-dominated parties, Iraq has now been led by a Shi’a-majority government that has become a steadfast regional ally of Iran. Consequently, Iran’s sphere of influence now extends all the way from territorially-contiguous Iran and Iraq to Syria and Lebanon.

The Saudi royal family was resentful of Iranian encroachment on the traditional Arab heartland. Therefore, when protests broke out against the Assad regime in Syria in the wake of the Arab Spring uprisings of 2011, the Gulf Arab States along with their regional allies, Turkey and Jordan, and the Western patrons gradually militarized the protests to dismantle the Iranian resistance axis.

Finally, the Trump Administration found itself on the crossroads to choose between the non-interventionist ideals of its electoral base or to pursue the militarist, regime change policy of its predecessors in order to protect the interests of America’s regional, Middle Eastern allies in a power struggle for regional dominance which has spilled a lot of innocent blood and has reduced a whole country of 22 million people to rubble, and it has chosen the destructive path of political pragmatism over pacifist principles.

The choice was predetermined, however, because the Trump Administration has already held several face-to-face meetings with America’s longstanding allies, such as Benjamin Netanyahu, King Abdullah of Jordan, Erdogan of Turkey and the heir apparent to the Saudi throne Prince Mohammad bin Salman. An hour-long phone call to Vladimir Putin and a message of reconciliation to Bashar al-Assad through Tulsi Gabbard were simply not enough to revise America’s longstanding policy in the Middle East.

3- Syrian rebels get arms and advice through secret command center in Amman: http://www.thenational.ae/world/middle-east/syrian-rebels-get-arms-and-advice-through-secret-command-centre-in-amman