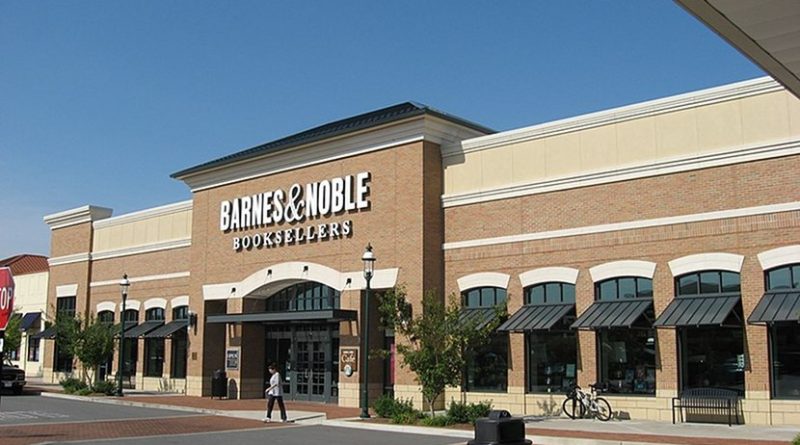 First it happened to Toys ‘R’ Us, but we did nothing (except complain).

Now it may be happening to Barnes & Noble, and we will do nothing again. (Nothing except complain, that is. We’ll definitely do that again.)

Yes, to start what will likely be weeks if not months of complaining about another big box mega-corporation struggling to stay in the black, David Leonhardt of the New York Times yesterday pleaded that we (meaning government regulators) “Save Barnes & Noble!”

The company’s leaders claim that they have a turnaround plan, based on smaller, more appealing stores focused on books, and I hope the plan works. It’s depressing to imagine that more than 600 Barnes & Noble stores might simply disappear — as already happened with Borders, in 2011. But the death of Barnes & Noble is now plausible.

At first glance, this seems like a classic story of business disruption. Barnes & Noble and Borders were once so imposing that they served as the model for the evil corporation trying to crush independent bookstores in the 1998 movie “You’ve Got Mail.” Then the world changed. The old leaders couldn’t keep up. Such is capitalism.

Except that’s not anywhere near the full story.

Leonhardt is self-aware enough to realize that he’s defending a mega-corporation once unfairly cast as a one-dimensional, possibly-a-monopoly, evil empire, but he apparently is not able to imagine that in a decade or two people may be writing op-eds titled, “Save Amazon!”

Instead, says Leonhardt, “The full story revolves around government policy — in particular, Washington’s leniency, under both parties, toward technology giants that have come to resemble monopolies.”

I appreciate that he has hedged his language here. Saying Amazon has “come to resemble” a monopoly gets around having to know what a real monopoly actually is and when it is actually economically harmful.

A real monopoly is when a single supplier is the only one in a given market. Real monopolies are harmful, as the economist Joseph Schumpeter pointed out decades ago, only when markets are also closed, i.e. when there are so many artificial barriers to entry that new competition could not possibly enter the market to challenge the monopoly.

As the economist Israel Kirzner put it, “[T]he necessary and sufficient condition for competition to exist without obstacle is complete freedom of entry into all kinds of market activity.”

So, first of all, does Amazon have no other competitors? A quick Google (or Yahoo! or Bing) search easily finds several alternate online booksellers. Note that competitors need not be anywhere near as big as Amazon. They only need to exist, i.e. be profitable, in the same market.

Furthermore, every local book store (the ones that survived the Great Barnes & Noble Terror of 1998, that is) competes with Amazon. They may not be as visible, but if they can make a profit, then they compete.

As for newcomers into the market, if the regulatory environment is truly “lenient” then anyone with enough capital and a better business model should be able to break in and compete as well.

The situation is actually even more complex, however. Comparing Amazon to Barnes & Noble isn’t exactly apples to apples. They do compete, but Amazon doesn’t just sell books themselves. Their website is also a platform for other, smaller sellers. Indeed, just last week I purchased a used book through Amazon from a bookstore of unknown size and location, likely a store that, without an online platform like Amazon, never would have enjoyed my business.

So even if Barnes & Noble is losing to Amazon, even then it would not be losing just to Amazon. It would also be losing to the very Mom and Pop stores people once feared it would crush.

I began by saying that people will likely complain but do nothing. I certainly hope so, at least. Despite Leonhardt’s objections, this really is “a classic story of business disruption.” So long as we keep the regulators out of it, that’s what it will be. Leonhardt would rather that Amazon were more like “Standard Oil and AT&T.” I like Amazon and want to keep liking Amazon, so I don’t.

In fact, Leonhardt even admits that, deep down, he likes Amazon, too: “Like many people, I am a frequent and usually satisfied Amazon customer.” One would expect that he then go on to advocate a call to action, asking others to follow his example in sacrificially cancelling their Amazon Prime memberships and flooding Barnes & Noble with their business.

But he doesn’t. He’d rather that, against the wishes of consumers like himself who are “usually satisfied” (4 out of 5 stars?) with Amazon, the government step in, break them up, and tell them and others how to do business — and thus that they tell consumers where and how they can and can’t do business, too.

I’m reminded of a few months ago when I explained to my six year-old son that Toys ‘R’ Us was closing forever. He was sad and didn’t want them to close. I explained that they couldn’t compete with Amazon inter alia, but that when a big company like Toys ‘R’ Us goes out of business, it is actually a sign that a market is healthy, because the big corporation wasn’t protected from failure by special government privilege. Naturally, my explanation did nothing to relieve his feelings that a great injustice had occurred. But, I added, it means Toys ‘R’ Us will have some great sales! That helped a little.

So we went to Toys ‘R’ Us and looked for a motorized wooden train he had been wanting. When we couldn’t find any, my son said, “That’s okay. We can just order it in the mail.”

So we did. Instead of trying to convince him to settle for some other toy — or no toy — my wife and I were able to order the exact train he had wanted at a great price.

Now, I know that some people at Toys ‘R’ Us stores lost their jobs. I’m not saying that isn’t important. But the people who work for Amazon are important too. And, for that matter, so is my son.

It is easy, as Frédéric Bastiat warned, to fret about what is seen and to overlook what is unseen. People see Amazon as big and scary and successful, and they see Toys ‘R’ Us or Barnes & Noble as shrinking, tired, and defeated. But what they don’t see are all the people whose cost of living has decreased due to Amazon, whose selection of products to meet their wants and needs has improved, nor all the small businesses who sell items on platforms like Amazon, nor all the people working for Amazon to support their families.

Amazon is not a monopoly, just as Barnes & Noble wasn’t. Rather, it is big and successful because it is doing a better job providing a service for millions of “usually satisfied” consumers every day. If it is to be broken up, I only wish it would be due to other companies better serving those millions of consumers, rather than by some bureaucrats who don’t care whether the result of their monopoly-busting would get a 1-star rating from the consumers they claim to protect. In practice, such regulation tends to close markets to the dynamism of competition that pushes even the big and successful to continue to outdo themselves in producing quality products and services.

Now that would be a loss well worth our complaints.

About the author:
*Dylan Pahman is a research fellow at the Acton Institute, where he serves as managing editor of the Journal of Markets & Morality. He has a Master’s of Theological Studies in historical theology with a concentration in early Church studies from Calvin Theological Seminary. He is also a layman of the Greek Orthodox Church.

One thought on “Don’t Save Barnes & Noble! – OpEd”