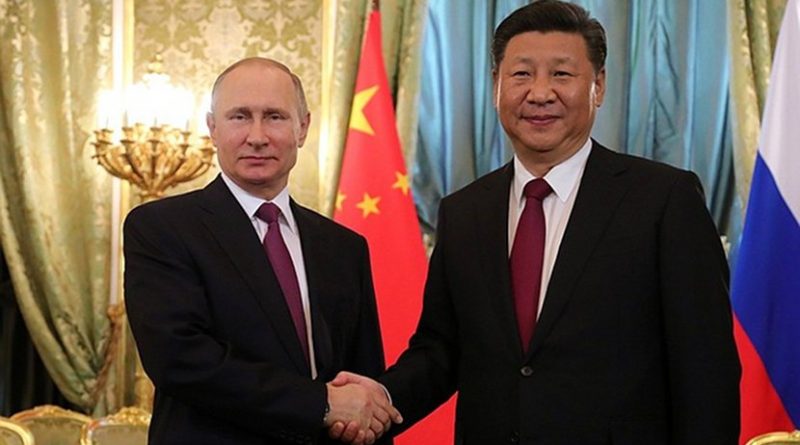 Although China and Russia never use the term of ally to describe their current relationship, the entente has been the fait accompli between the two countries since 1996. With the state visit of President Xi Jin-ping to Russia on July 3-4, this is his sixth visit to Russia since his assumption of presidency, and was also the third meeting between the two heads of states in a period of six months of 2017.

Undoubtedly, Xi’s latest visit to Russia is of great significance to deepen the strategic consensus in terms of Sino–Russian comprehensive relationship. In addition to the confidential meetings and co-chairing talks, both heads of the state jointly signed and issued a communiqué of the 2017-2020 implementation outlines for the Treaty of Good-Neighborliness and Friendly Cooperation between China and Russia, and then followed by a joint statement on the North Korea’s missile test in which the two countries’ foreign ministers expressed their grave concern about a sharp military escalation. Here the enquiries occur why strategic partnership between China and Russia are so important to the two great powers, regional stability, and world peace? And what have caused this happened?

To start, some Western observers have placed an excessive emphasis on China-Russia’s tensions in history, by arguing that the relationship between Beijing and Moscow is likely to remain fragile as what have developed since the 1990s, including ultra-nationalism in China and Russia, their asymmetric economic capacities, and volatile changes of the geopolitical contour of the Eurasian continent. Given this, leadership of China and Russia have been consciously highlighting foreign policies that aim to build up a new type of the world order that they envision in which the partnership is common opposition to the present U.S.-dominated “unipolar world”. Yet, scholars in the West and in China as well are still obsessed with that the partnership, no matter how Beijing and Moscow defined it, would be essentially a marriage of convenience that would be trumped by the wide range of their interests, including each other’s eagerness to have good relationship with the West and the United States particularly.

Those scholars have failed to understand that, since the 1990s, officials in both sides have regretted their ideological rows and the border disputes during the Cold War. Since early the 1990s, the policy-makers in Beijing and Moscow are obviously determined not to repeat these problems. Although China is now in a position to act in a more confident way in the relationship, it has been shown restraint. Meanwhile, leaders of the two nuclear powers want to avoid allowing chauvinistic nationalism in either side to trump their shared interest in terms of the common concern with the pressure and “bully” of the United States and its allies. Rather, it is widely believed that the constructive partnership between China and Russia serves a sort of strategic backing to mutual interests, and will make inevitable contributions to regional and world peace, stability, development and prosperity. To that end, Chinese leader has presented “the Belt and Road Initiative” that involves a new geopolitical order in the Eurasia and beyond —with Beijing playing an outsize (but not a dominant) role. Russian leader had likewise clarified that Moscow aims to create a Eurasian Union, in which relations between former Soviet states are determined by Moscow. Meanwhile, both China and Russia have accused the United States of following a Cold War mentality by trying to contain their rightful ambitions in the adjacent regions. As Joseph Nye Jr. warned 17 years ago, it would take very clumsy American policy and behavior to drive China and Russia more fully into each other’s arms.

Accordingly, there are reasons to believe that the partnership between China and Russia is durable. First, in geopolitical term, China and Russia have agreed to consolidate the strategic coordination, facilitate peace talks, properly handle the Korean Peninsula issue, and push all parties to sincerely solve the Korean nuclear issue through peaceful means. Given that North Korea provocatively made missile launch on July 4, a stern warning came from Washington that “missile launch was in defiance of a ban by the UN Security Council, and the United States was prepared to use the full range of our capabilities to defend ourselves, and our allies, if we must.” On that day, China’s representative also said North Korea’s actions were unacceptable, but repeated China and Russia’s call for all involved to stand down. Rarely, in a joint statement signed by both Foreign Ministers, they proposed a “dual track” approach to denuclearizing the peninsula. That means North Korea should halt all its missile and nuclear programs, in exchange for freeze of the US and South Korea’s joint military drills in the region. They also propose reversing plans to deploy a controversial anti-missile system (THAAD) in the Korean Peninsula, as China and Russia share consistent stance that the deployment of the THAAD is to upset the strategic equilibrium in terms of nuclear deterrence doctrine. Given this, a sustained, sound and steady development of China–Russia relations is conducive to maintaining the security of the two countries, the stability of the region and the peace of the world. Here it emphasizes that the geopolitical challenge of China at the present time drives Beijing’s ruling elites more anxious to deepen strategic partnership with Moscow, though the latter has expressed the obvious resentment against the specter of the U.S. hegemony.

Second, in a personal level, Chinese President Xi has been keen on his mutually trusted ties with President Putin who is seen to provide undisputable impetus for a continuous development of the comprehensive strategic partnership of coordination between the two great powers. He reiterated that China—Russia relations are at its best in history, since both sides have fully supported each other on issues concerning respective core interests, smoothly advanced the docking of the “Belt and Road” construction and the Eurasian Economic Union. Xi publicly stressed that Russia is China’s important partner in the advancement of the “Belt and Road” construction. China-Russia practical cooperation enjoys great potential and broad prospects. At the end of the meeting on July 4, Putin was reported to say that he and President Xi have forged a very sound working relationship and profound friendship. In addition, vigorous cooperation has been carried out in the fields such as investment, energy, people-to-people and cultural engagement. They agreed to expand the bilateral cooperation to the new projects of Moscow-Kazan high-speed railway, cross-border infrastructure construction, and a joint development in Arctic channel called the “Ice Silk Road”. To that end, the Russians stand ready with China to expand closer high-level cooperation in a wide range of businesses. As a matter of fact, by 2016 Russia has become the largest oil-supplier to China while it has been the largest cereal goods-importing country from Russia. It is not a coincidence evidently. Rather, it is a feature of a new, post-Cold War strategic partnership between China and Russia. As long as the current political elites in Beijing and Moscow hold on to power, there is no reason to expect a major shift in the Sino-Russian relationship. Countries hoping to drive a wedge between the two powers—such as Japanese leader Shinzo Abe—are bound to be disappointed. It is equally no accident for the United States unsuccessfully to win China’s support against Russia’s takeover of Crimea by coercion.

Given the analysis presented above, the conclusion goes that China as a rising power is still concerned with the alliance between Japan and the United States which takes it as the key to its security in Asia, but sees China-U.S. relations as a zero-sum game. Russia alone is still the most powerful challenge to the U.S. although the collapse of the Soviet Union in 1991 left a Russia significantly shrunken in territory, population, economy and military clouts. To be sure, China and Russia asserted the common interest in safeguarding their own security and world peace. Yet, that the United States has pursued unilateralism or “unipolar world order” has helped unwisely China and Russia overcome their differences. Due to this, whether the issue is North Korea, Iran or some other challenge to the West, the United States and its allies in the West should be well-prepared for more Sino-Russian cooperation, not less. Twenty years ago, Kissinger warned that only the unlikely prospect of relentless American bullying of both China and Russia could drive them to deepen partnership. Nowadays, for good or bad result, his concern has come true.