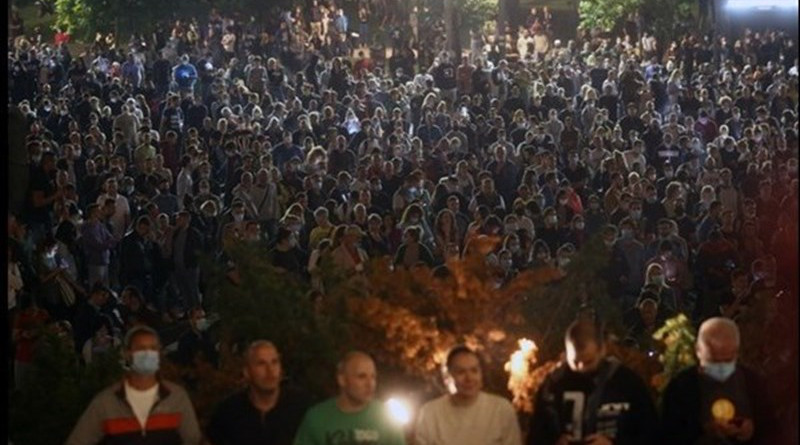 (RFE/RL) — Serbia this week was the scene of the worst violence in Europe thus far over a government’s response to the coronavirus pandemic.

Two nights of sometimes brutal clashes followed President Aleksandar Vucic’s announcement on July 7 that citizens should brace for a new lockdown over the weekend after a record COVID-19 daily death toll.

Scores of police officers and protesters were injured and dozens of civilians were arrested the first night after thousands of people descended on downtown Belgrade and some tried to force their way into the parliament building.

By July 9, the president and prime minister had backed away from proposals for a nationwide or citywide curfew, announcing more limited measures instead to stop the accelerating spread of the virus in the capital.

Demonstrators gathered to protest again on July 9 despite the government’s stunning turnaround in the face of a worsening public-health crisis.

How did Serbia and its political leadership find themselves in this mess?

There are indications it’s a result of a potent combination of perceived mistakes in a start-and-stop response to the coronavirus, an erosion of political alternatives on a constricted media landscape, and a rekindling of grievances that fueled more than a year of weekly protests before COVID-19 kept demonstrators off the streets.

Who Are The Protesters?

At his press conference on July 8, Vucic attributed the previous night’s violence to right-wing groups and “foreign secret services,” without giving details.

He also said their shouts and chants in front of parliament suggested they were motivated by conspiracy theories unrelated to the public-health crisis.

Meanwhile, Prime Minister Ana Brnabic sought to cast the rioters as political elements who “showed their true, violent face” because “they couldn’t enter the Serbian Assembly” — its national parliament — “through the elections” on June 21.

Most early reports suggested that right-wing nationalists were present at the storming of the parliament building on July 7 and part of some of the most serious clashes.

Leaders of a kaleidoscopic alliance of opposition groups called the Alliance for Serbia (SzS) held a press conference on July 8 and claimed the violence had been “staged.” They blamed the clashes the previous night on government-hired “hooligans.”

The leader of a center-left party within the alliance, the Party of Freedom and Justice (SAA)’s Dragan Djilas, said he would be among protesters that second night.

“We are not the organizers of the protest, but we will be there with the citizens,” Djilas said. “We are protesting as citizens. This is a protest of people who can no longer withstand state violence against them.”

But Who Is It, Really?

A man subsequently identified as Petar Djuric became the public face of Serbian frustration on the first night of the unrest.

He announced to a live camera through tears of anger that his father had died at Belgrade’s Zemun Hospital while waiting three days for a ventilator despite Serbian officials’ assurances there would be no shortage of such lifesaving equipment.

“Dad, this is for you!” Djuric shouted repeatedly, adding that he was still awaiting doctors’ confirmation that COVID-19 was his father’s cause of death.

He also accused police of using nightsticks, tear gas, and other weapons against unarmed protesters before rushing away to rejoin the protests.

After the video of Djuric went viral and Vucic challenged his account at a press conference on July 8, the man posted a photo of his late father on social media alongside a medical report showing that the senior Djuric spent days in early April “awaiting a free space” on a ventilator as his oxygen level sank despite being assigned COVID-19 care.

“Pinocchio, your nose has grown,” Djuric taunted the president in a Facebook post in Serbian and English.

He said Vucic had not bothered to check on the veracity of Djuric’s claim because he knew “it is easy to spit on and beat someone small…and no one can do anything for them.”

A Question Of Trust?

And Djuric’s seemingly impromptu televised appeal was one of the most dramatic and emotionally wrenching signs of the lack of trust that some Serbians are experiencing during the COVID-19 crisis.

But recent weeks have brought a burgeoning epidemic with record death tolls, along with accusations that officials are covering up equipment shortages and hugely understating infections and fatalities.

In a report published the day after the elections, the Balkan Investigative Reporting Network (BIRN) alleged that leaked data “from the state’s COVID-19 information system” showed the official infection and death figures for a two-month period before the voting were half of what they actually were.

Vucic and Brnabic have each dismissed that report as false, with the president insisting those numbers are “not authentic” and the prime minister blaming opponents for “fake news, misinformation, and playing politics.”

But after daily infections began to surge last month, there has also been a trickle of protests by doctors and other health-care workers.

Hospital workers turned their backs on Brnabic and the country’s health minister during a visit to Novy Pazar, one of the COVID-19 hot spots, late last month to protest hospital conditions and inaction by officials.

“Most citizens don’t trust the government [regarding] crisis response. Providing accurate information is one pillar of trust,” Marika Djolai, a Balkan specialist from the European Center for Minority Issues, tweeted after the first night of violence.

“The other pillars are [the] government’s commitment to [the] direct protection of citizens by providing adequate health care and disaster response. Situation in #Sandzak #Kragujevac #Vranje #Kraljevo etc. shows this is not the case. People are desperate and dying,” she said.

Familiar Faces On The Streets?

Serbia’s government appears to have misjudged the risks of a swift preelection reopening in a pandemic.

The relaxation at least lifted the spirits of those Serbian voters who ignored the opposition boycott, giving Vucic and Brnabic’s Progressive Party coalition nearly 61 percent of the vote.

But before the votes were even tallied, there were signs of a major swell in coronavirus cases. Officials quickly scrambled to reimpose some pandemic restrictions, including in Belgrade where some 80 percent of the new infections were being registered.

Add to that a yearlong opposition movement that’s been pent up since the pandemic hit and mostly sat out the election, and there is a sense in some quarters that Serbian anger was ready to spill over.

The weekly “1 of 5 Million” protests against Vucic and the ruling parties had gone on in the capital and other cities for over a year before the pandemic hit Serbia in March.

Those gatherings, attended by divergent swaths of the political spectrum, were ignited by an attack on opposition politician Borko Stevanovic. But some warned of more political violence and creeping authoritarianism, and targeted government corruption and Vucic’s tightening grip on state institutions and the media.

Although a number of opposition parties had already indicated before COVID-19 that they would boycott the parliamentary elections originally slated for April, the epidemic and resulting state of emergency encouraged further boycotts and intensified concerns that the vote was unlikely to be free and fair.

Election monitors from the Organization for Security and Cooperation in Europe noted after the rescheduled balloting in June that “voters were left [underinformed] and frustrated by the opposition’s lack of access to the media.”

They warned: “The dominance of the ruling party risks the neutrality of the country’s democratic institutions, and dialogue is needed to bridge the deep political divisions and protect pluralism.”

On July 8, center-left opposition politician Bojan Pajtic blamed eight years of the “destruction of opposition parties and independent media as an institutional ‘release valve'” for “a torrent of dissatisfaction that is dangerous for you precisely because it has nothing to do with the parties.”

As a result, Pajtic tweeted of the current unrest: “You get [people protesting on] the street.”