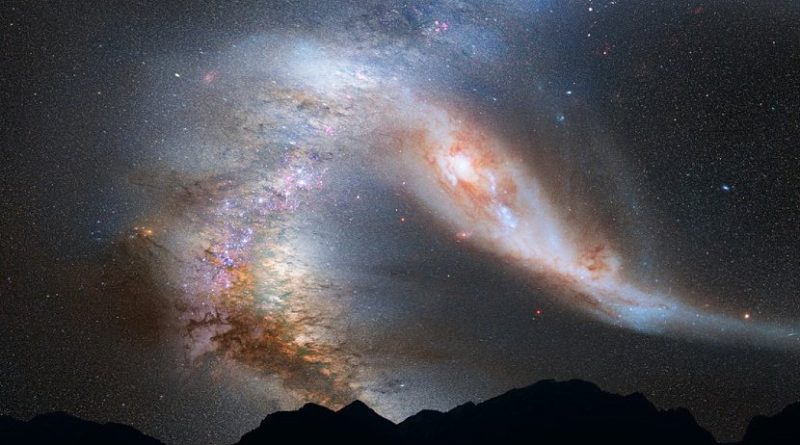 A pair of dwarf galaxies closely circling the Milky Way, the Large and Small Magellanic Clouds, were in the throes of merging into one when they fell into our galaxy. The duo is thought to hold enough gas to replenish half of the Milky Way’s supply of star-making fuel, and now, a study in the Monthly Notices of the Royal Astronomical Society offers new insights into how galaxies like ours are able to capture this gas so easily.

“You have this enormous reserve of star formation fuel sitting there ready to be stripped by another system,” said study coauthor Mary Putman, an astronomer at Columbia University.

Home to millions of stars, dwarf galaxies are outshined by bigger galaxies like the Milky Way with hundreds to thousands of times more stars. But what dwarf galaxies lack in brightness, they make up for in their sheer abundance of star-making fuel. The hydrogen gas swirling through the Large and Small Magellanic Clouds and dwarf galaxies like them are thought to play a key role in birthing new stars and other small galaxies.

To explore the star-making potential of dwarf galaxy pairs, a research team led by then-Columbia graduate student Sarah Pearson turned to a remote pair — NGC 4490 and NGC 4485 — 23 million light years away. Similar to the Large Magellanic Cloud, NGC 4490 is several times larger than its companion galaxy. But its isolated location allowed the researchers to simulate its eventual merger with NGC 4485 without interference from the Milky Way’s gravitational pull.

In their simulations, they watched the bigger galaxy, NGC 4490, peel off gas from its smaller sibling, a gravitational effect due to their lopsided difference in size. As the pair circled ever closer to each other, the smaller galaxy’s tail of gas was swept farther and farther away, a finding that supports a study earlier this year that fingerprinted the gas streaming from the Magellanic Clouds into the Milky Way as belonging to the Small Magellanic Cloud.

Long after NGC 4490 collided with its smaller companion and merged into one in the researchers’ simulation, their gas footprint continue to expand, the researchers found. In five billion years, they found, the pair’s gas tails would extend over a distance of 1 million light years, nearly twice its current length.

“After 5 billion years, 10 percent of the gas envelope still resides more than 260,000 light years from the merged remnant, suggesting it takes a very long time before all the gas falls back to the merged remnant, ” said Pearson, who is now a fellow at the Flatiron Institute’s Center for Computational Astrophysics.

When the researchers compared their results to real-world observations of NGC 4490/4485 made by telescope, the results matched, indicating their model was accurate.

Their findings are also consistent with what astronomers know about the recycling of gas in the universe. As gas clouds grow more extended, the looser the gas becomes, thus making it easier for a bigger galaxy to come along and gobble it up. The simulation suggests that this dispersal process has helped the Milky Way efficiently strip gas from the Small Magellanic Cloud, and that this sort of gas-transfer may be fairly common elsewhere in the universe.

“Our study suggests that similar dwarf pairs exist out there,” said Pearson. “Because their gas is so extended, if they fall into something like the Milky Way, their gas is easily shed.”

The study further suggests that declining gas density on the outskirts of colliding dwarf galaxies makes it hard for new stars to form, a conclusion matched by observations. The researchers plan to continue studying other pairs of dwarf galaxy collisions to refine their model.