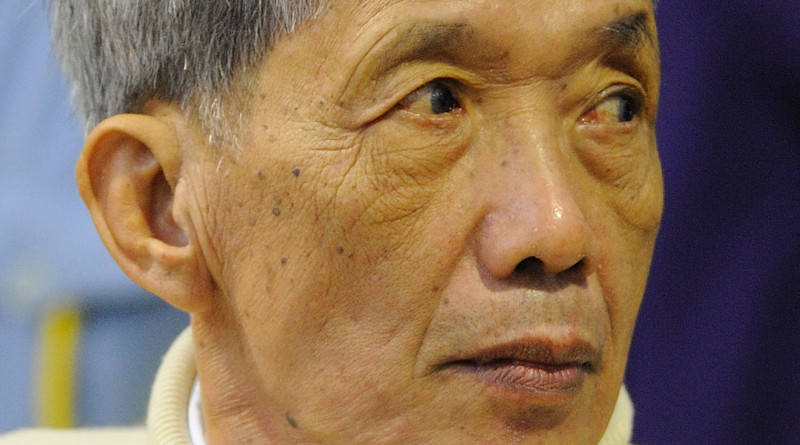 One of the cruellest men ever to have lived died on September 2 in Phnom Penh, the capital of Cambodia. Kaing Guek Eav, popularly known as “Duch”, was 77 and had been convicted of mass torture by the UN/Cambodian war crimes court. He was the only one of the five defendants to admit his crimes. In July 2010 in a trial I witnessed first-hand he was sentenced to life imprisonment.

According to Seth Mydans, the New York Times’s correspondent in Cambodia at the time of the rule of Pol Pot who founded the guerrilla movement, the Khmer Rouge, “he was a schoolteacher before the Khmer Rouge came to power. He took his revolutionary name from a children’s book about an obedient schoolboy named Duch. ‘I wanted to be a well-disciplined boy who respected the teachers and did good deeds’, he told the court.

That obedience made him an effective operative for the top Khmer Rouge leadership. His chief defence was that he, too, had feared for his life if he did not carry out orders. But the vigour, creativity and cruelty with which he ran his torture house belied that defence. 15,000 or so died at his command. And his brashness and arrogance during the trial were anything but that of a young innocent”.

Cambodians knew him as the cruellest of the cruel who ran the main prison. He was the author of such directives as “Use the hot method, even if it kills him”. In the margin of a list of 17 children he wrote, “Kill them all”. Ironically, he said later that torture had taught him not to believe in confessions carried out under duress — only about 40% of what they confessed to was true.

Once captured he tried to present himself as a different person. “I think my biography is something like St Paul’s, he told Nate Thayer, an American reporter who recounted this strange story in the Far Eastern Economic Review. “I feel very sorry about the killings and the past. I wanted to be a good communist. Now in the second half of my life I want to serve God by doing God’s work to help people”. In fact, he seemed to spend much of his spare time in fancy restaurants.

Cambodia had been heavily and barbarously bombed by the US during the Vietnam War, following a policy initiated by the US secretary of state, Henry Kissinger who, despite his war crimes, is feted among many of the political elite in the US today.

Vietnam is Cambodia’s neighbour and through Cambodia the North Vietnamese ran guns to its allies in the south during its war with the US. Cambodia was almost flattened. It created a political vacuum which the Khmer Rouge occupied and took advantage of. They ruled until 1979 when they were overthrown by Vietnam which installed the present, almost dictatorial, regime.

A week after the Khmer Rouge took power they forced as many as two million people living in the capital to leave the city and work in the countryside. Thousands died during the evacuation. It was carried out in a hurried, merciless, way, forcing the inhabitants to leave behind all their possessions. Children were separated from their parents and many old and sick died on the road. 1.7 million people died from execution, torture, starvation, untreated disease or overwork. (An unusually good film, “The Killing Fields” was made of this.)

The communist Khmer Rouge believed this was a levelling process that would turn the country into a rural, classless, society. They abolished money, free markets, normal schooling, foreign clothing styles, religious practices and traditional culture. There was no public or private transportation, no private property and no non-revolutionary entertainment. People had to work 12 hours a day and be married in mass ceremonies with partners chosen by the party. Showing affection to family members was forbidden. Dissidents and complainers by the thousand were shot in the back of the head.

The sadistic practices of the Khmer Rouge only came to a halt in January 1979 when Vietnamese troops (supported politically by the Soviet Union) and the forces of the United Front for the National Salvation of Kampuchea (Cambodia) fought their way into Phnom Penh.

The Khmer Rouge then fled westward and re-established themselves close to the Thai border, posing as refugees. UNICEFs, other UN agencies and Western NGOs, taken in by the misrepresentations of the murderous movement, fed them and gave them medical attention, and thus strengthened them enough to fight another day.

The US, still reeling from its defeat in the hands of the North Vietnamese, acted on the old adage, “my enemy’s enemy is my friend”. It persuaded the UN to give the Khmer Rouge Cambodia’s seat in the UN. Its flag flew outside the UN’s headquarters in New York. From 1979 to 1990 it was recognized as the only legitimate representative of Cambodia. Every Western European country voted for this, with the exception of Sweden. The Soviet bloc voted against but failed in its quest to embarrass the West.

Right through the presidencies of Gerald Ford, Jimmy Carter, and Ronald Reagan this policy was continued. Not until George W.H. Bush came into office was this wicked era of tolerance ended.

Even after that evil farce was brought to a close, the Khmer Rouge continued to exist until 1990 by which time its leaders had either died, been arrested by the Vietnamese-backed government or defected to it — like Hun Sen, then and now the prime minister.

At the same time as the US and Europe were supporting the Khmer Rouge regime’s seat in the UN, many left-wing intellectuals and activists in the West were also giving them support. They saw them as a clean communist broom sweeping out the old order. They closed their eyes or looked the other way, despite the publicity given to the genocide by the New York Times, the Washington Post, Le Monde and the International Herald Tribune where I wrote columns about it. (The rest of the media more or less ignored it.)

Shortly after the US’s termination of its pro-Khmer Rouge policy the Big Five of the UN’s Security Council surprised the world by announcing that Cambodia would become a UN protectorate. The competing armies would be disarmed, and a new democratic government chosen by a fair ballot. The UN had never done anything quite like this.

In October 1991 Cambodia’s factions and the representatives of 19 nations met in Paris to sign the Peace Accords. Bush’s secretary of state James Baker told the conference “What makes the case so extraordinary and its claim for international support so compelling is the magnitude of the suffering its people have endured”.

Nevertheless, the US, preoccupied by its first war in Iraq, soon lost interest. Later, the next president, Bill Clinton, seemed to be indifferent or oblivious.

It wasn’t until the UN persuaded the Hun Sen government to agree to a war crimes court with Cambodian and UN-chosen judges that justice began to be done. It was set up in 1997, seven years after the demise of the Khmer Rouge.

Finally, the Cambodian authorities arrested Duch and Ieng Sary (the Khmer Rouge’s foreign minister, his wife Ieng Thirith (ex minister for social affairs) and two other senior leaders, Nuon Shea and Khieu Samphan. All have been found guilty apart from Ieng Thirith who was excused because of Alzheimer’s.

One can ask the question: How much does the outside world care or even know? The Khmer Rouge has faded into history. Some of us asked will there be more genocides that the world will ignore until it is too late? It seems so. The genocide in Rwanda in 1994 has been and gone with little shame shown by the outside world. As Martin Luther King once said, “We must break the silence of the night……No lie can live for ever……Truth pressed to earth must rise again.”

*Note: The writer was for 17 years a foreign affairs columnist and commentator for the International Herald Tribune. Visit his website: www.jonathanpowerjournalist.com

Home » Cambodia: Death Of The Leader Of ‘The Killing Fields’ Raises Questions – OpEd