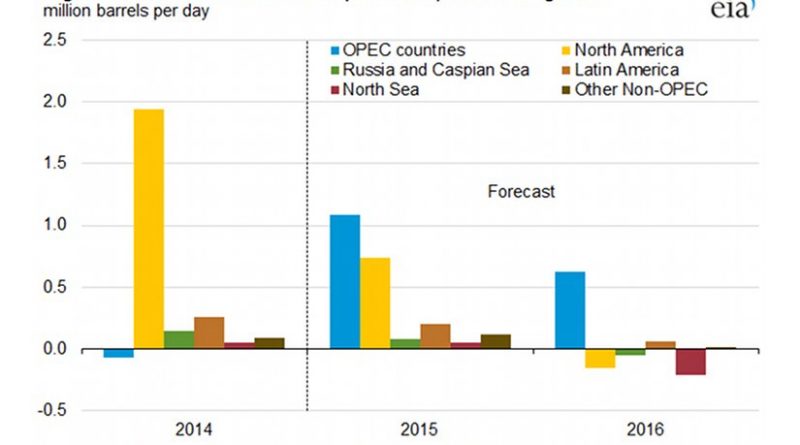 The Short-Term Energy Outlook (STEO) released on December 8 forecasts non-OPEC crude oil and other liquids production to grow by 1.2 million barrels per day (b/d) in 2015, and then decline by 0.4 million b/d in 2016, which would be the first annual decline in non-OPEC production since 2008. The shift in expectation from non-OPEC production growth to declines in 2016 is mostly because of declines in U.S. onshore and North Sea production (Figure 1). Non-OPEC production growth in 2015 is largely attributable to investments committed to projects before the oil price decline that began in mid-2014. Redirection of investment away from exploration towards currently producing fields has also helped maintain or increase production levels in other non-OPEC countries. This strategy has helped maintain production levels in the short term, but it will likely result in lower future production in areas that depend on continued exploration successes for output growth.

EIA expects U.S. crude oil production declines to continue through September 2016, when total production is forecast to average 8.5 million b/d. This level of production would be 1.1 million b/d less than the 2015 peak reached in April. Forecast production begins increasing in late 2016, returning to an average of 8.7 million b/d in the fourth quarter. Expected crude oil production declines through September 2016 are largely attributable to unattractive economic returns in some areas of both emerging and mature onshore oil production regions, as well as seasonal factors such as anticipated hurricane-related production disruptions in the Gulf of Mexico. Reductions in 2015 cash flows and capital expenditures have prompted companies to defer or redirect investment away from marginal exploration and research drilling to focus on core areas of major tight oil plays.

EIA forecasts OPEC crude oil and other liquids production to increase by 1.1 million b/d in 2015, led by production increases in Iraq. Forecast OPEC crude oil and other liquids production increases by 0.6 million b/d in 2016, with Iran expected to increase production once international sanctions targeting its oil sector are suspended. At its December 4 meeting, OPEC members announced they “should continue to closely monitor developments in the coming months.” This indicates OPEC producers, led by Saudi Arabia, are continuing the policy of defending market share in a low oil price environment.

EIA expects global consumption of petroleum and other liquids to grow by 1.4 million b/d in both 2015 and 2016. Projected real gross domestic product (GDP) for the world weighted by oil consumption, which increased by 2.7% in 2014, is expected to rise by 2.3% in 2015 and by 2.6% in 2016. Despite continuing demand growth and slowing supply growth, global petroleum and other liquids production continues to outpace consumption, leading to inventory expansion throughout the forecast period (Figure 2). The current average price forecast for Brent crude oil in 2016 is associated with a further reduction in the outlook for supply growth that in turn reduces the surplus of supply over consumption. EIA estimates average North Sea Brent crude oil prices of $53/barrel (b) in 2015 and $56/b in 2016. The 2015 price forecast is $1/b lower than in last month’s forecast and the 2016 estimate is unchanged. Forecast West Texas Intermediate (WTI) crude oil prices average $4/b lower than the Brent price in 2015 and $5/b lower in 2016. Current values of futures and options contracts continue to suggest high uncertainty in the price outlook (Market Prices and Uncertainty Report). Based on contracts traded during the five-day period ending December 3, the lower and upper limits of the 95% confidence interval for the market’s expectation of monthly average WTI prices are estimated at $30/b and $63/b for March 2016, widening to $26/b and $90/b for December 2016 (Figure 3). Key market uncertainties include the pace and volume at which Iranian oil reenters the market, the strength of oil consumption growth, and the responsiveness of non-OPEC production to low oil prices. The U.S. average retail price for regular gasoline decreased one cent from the previous week to $2.05 per gallon as of December 7, 2015, 63 cents per gallon less than the same time last year. Prices decreased in all regions except the Midwest, where the price increased one cent to $1.89 per gallon. The Rocky Mountain price fell four cents to $2.01 per gallon. Both the East Coast and West Coast prices dropped more than one cent, to $2.07 per gallon and $2.54 per gallon, respectively. The Gulf Coast price was $1.82 per gallon, declining less than one cent from last week.