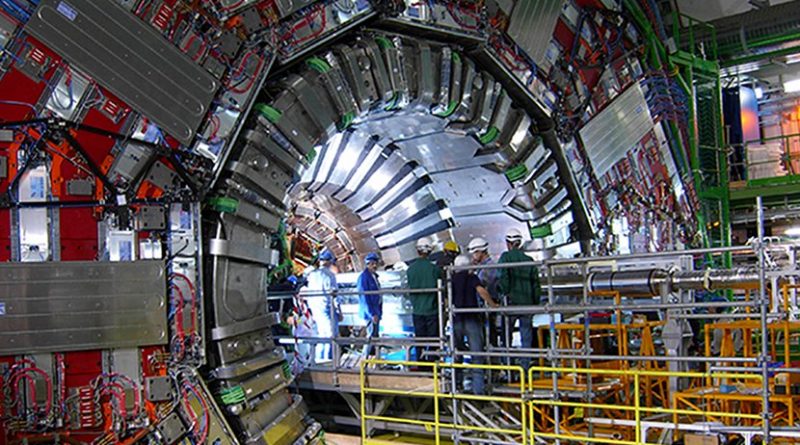 The CMS detector in the Large Hadron Collider with which Pekkanen and thousands of other physicists work at CERN. Photo: Panja Luukka

Thousands of researchers at the CERN research centre are looking for particles and phenomena that standard physics cannot explain. Aalto University doctoral student Juska Pekkanen is part of a group working with the highest collision energies ever achieved.

The work at the CERN research centre in Switzerland became widely known when the 2013 Nobel-prize-winning discovery of the Higgs boson completed the standard model of particle physics. What Pekkanen and thousands of other physicists at CERN do now, is explore phenomena that fall beyond the current understanding of the sub-atomic world.

For instance, only 15 per cent of the mass of the entire universe can be accounted for now with normal visible matter, the rest is dark matter of which there’s very little knowledge. An equally shrouded mystery is dark energy that makes the universe expand and pushes celestial bodies away from each other.

”Because these and many other unanswered questions still remain, we must try to take them on and understand phenomena that have no explanation in current physics,” said Pekkanen.

One way to do this, is to make protons – the nuclei of hydrogen atoms – collide at tremendously high speeds and energies, and study what comes out of the crashes. Pekkanen and his colleagues have focused on particle bursts called ‘jets’ that are born when protons collide. These events could contain faint signs of completely new particles.

Autopsies for millions of particle bursts

The study of jets at the particle level has become a nascent field in physics, dubbed by Pekkanen and his colleagues at the CERN Compact Muon Solenoid (CMS) experiment as ‘jet particology’. They record the collisions in the CERN Large Hadron Collider and measure their aftermath. Virtually every collision produces jets, or bursts of tens of particles that consist of quarks and gluons. Researchers count the total energy in the jets and measure how their energy is carried by different kinds of particles.

“We are trying to get as detailed an understanding as possible of the jets with the millions of sensors in our 20-metre long, 15-thousand-ton detector. The more accurate we get with our measurements, the easier it becomes to discover new particles,” said Pekkanen.

The thousands of signals that some of the millions of sensors pick up have to be sorted with complex algorithms. By recreating the events with computer simulations, the sensors can be fine-tuned.

Jets could, according to Pekkanen, also be key in finding new massive particles. He has focused on events where a collision of particles produces two jets that burst into opposite directions.

“These events could be the point where an unknown particle is first born and then instantly decays into other particles. We analyse billions of these collisions and see if we spot any abnormalities that could be a sign of revolutionary new particle,” explained Pekkanen.

The study makes use of the highest energy level ever achieved in the Large Hadron Collider: 13 teraelectronvolts. For a single proton that’s quite a lot, roughly the kinetic energy of a mosquito flying. Count all the proton energies together: enough to fly a jumbo jet.

The experiments will continue: by the end of 2022, the physicists expect to collect up to ten times more data.

“So far we haven’t found the next new massive particle. This means there’s a need for designing the next generation of hadron colliders and detectors to reach even higher energies – and hopefully long-awaited new physics.”

Home » Diving Into The Unknown: What’s Physics After Higgs Boson?