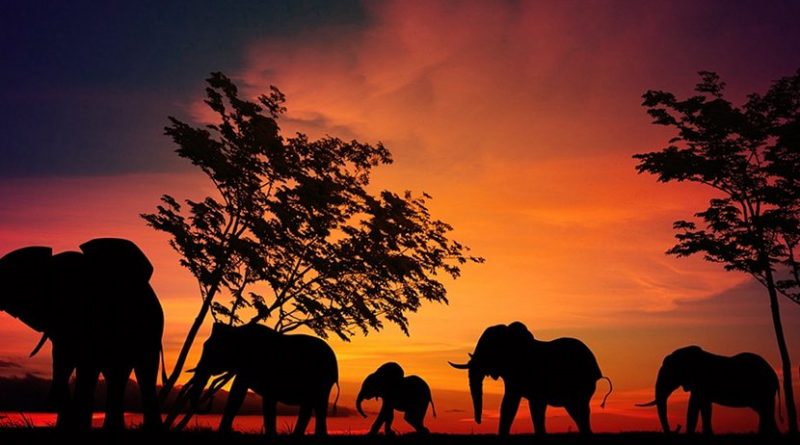 The LPI “is a measure of the state of the world’s biological diversity based on population trends of vertebrate species from terrestrial, freshwater and marine habitats adopted by the Convention of Biological Diversity (CBD) to track the progress”.

Only one-third of the overall decline (32%) relates to the period since 2000 where the most decline was for the freshwater species (44%) followed by terrestrial species populations (39%) and marine species (8%) (WWF, 2020) (Secretariat of the Convention on Biological Diversity, 2020).

The decline in biodiversity also ranges in terms of the regions where the region of Latin America and Caribbean has the most striking trend with decline of 94%. Meanwhile, the negative trend accounts for 24 % in the region of Europe and Central Asia, which also includes Azerbaijan.

For the past 500 years, around 680 species of vertebrates have gone extinct due to the human activities. Concerning the species extinction, the proportion of species threatened by extinction accounts for approximately 23,7 % across all taxonomic groups (7.5% for selected families of bony fishes, to 14% of birds, 26% of mammals, 30% of sharks and rays, 33% of reef- forming corals, 34% of conifers, 36% of selected families of dicots (magnolias and cacti), 41% of amphibians, and 63% of cycads).

Meanwhile, IUCN Red List indicates that 27% of 120,372 species assessed is under the risk of extinction (Secretariat of the Convention on Biological Diversity, 2020).

However, it is important to keep it in mind that most species are understudied and not discovered yet which also leave room for the larger extinction statistics beyond the existing calculations.

b. Homogenization of biota and landscapes

In order to analyze the gender dimension of the climate change in the local context, it is essential to look at the existing policies and legislative frameworks which play a role as an entry point for the integration of gender aspect into the climate action. Based on the analysis of the documents (i.e. Nationally Determined Contributions (NDC), National Communications (NC), and Biennial Update Reports (BUR)), presented to United Nations Framework Convention on Climate Change (UNFCCC) by Azerbaijan, no reference was identified regarding the issues of gender and women.

Forests covering 31% of the land area are homes to the 80 % of terrestrial plants and animals (391 000 species of vascular plants, 144 000 species of fungi, 70 000 vertebrate and 1.3 million species) (FAO and UNEP, 2020). Conversion of forests into man-made environments such as agricultural fields or urbanization is one of the existing scenarios concerning homogenization process. Within the period of three decades (1990-2020), forest area as a proportion of total land area decreased from 32.5 % to 30.8 %. Meanwhile, average rate of net forest loss declines by 40% comparing the periods of 1990–2000 and 2010–2020 due to the counterbalance between deforestation in some countries and afforestation in other countries (FAO and UNEP, 2020).

According to the widely cited framework by Stedman-Edwards (1998), the root causes of the biodiversity loss lay within the socio-economic factors which further lead to changes in resource use patterns and ecosystem impacts, and finally to biodiversity loss. Taking the framework and adding several other causes introduced in previous reports and research studies, the following illustration capturing key drivers behind biodiversity loss can be presented:

The relations among the socio-economic components are much more complex and interconnected with certain reinforcement among themselves than depicted in the illustration (Stedman-Edwards, 1998). Hereinafter, these components may lead to biodiversity loss separately or in conjunction with one another.

By relying on the concept of ecosystem services, four major impacts of biodiversity loss on humans can be mentioned:

The livelihood of the human population is closely linked to the natural resources and the most vulnerable portion of the society might be directly dependent on biodiversity to fulfill their daily needs. According to UN World Water Development Report (2016), three out of four jobs globally are linked to water. In the Global South, forest resources comprise 20-60% of a family income while more than 1.6 billion people worldwide depend on forests for their livelihoods (Conservation International, n.d.). Taking into account the dependence of human livelihood on nature and biodiversity, biodiversity loss certainly creates a major hurdle for people’s livelihood, especially impacting most vulnerable and marginalized ones.

Biodiversity – biosphere, in a more general way – is a foundation for majority of economic activities. Based on The Nature Risk Rising report more than half the world’s GDP (i.e. US$44 trillion) is either highly or moderately dependent on nature and its services (WWF, 2020). For instance, the value of pollination services (i.e. regulating services provided by ecosystems) is estimated to be US$195 billion to ~US$387 annually (Porto et al., 2020) by taking into account that roughly 75% of the world’s food crops depend at least partially on pollination (Siikamäki, n.d.). Meanwhile, concerning the valuation of ecosystem services, according to the study by Costanza et al. (1997), the value of 17 ecosystem services for 16 biomes is estimated to be in the range of US$16-54 trillion per year, with an average of US$33 trillion per year.

Biodiversity is an underpinning component for food security and nutrition since it provides us with thousands of species of wild and domesticated plants, animals, fungi and micro-organisms which are main sources of human dietary. Along with its direct contribution, biodiversity also plays a major role in food production through several backbone activities such as pollination (enabling reproduction of crop species), certain biota protecting crops from pests, micro-organisms and invertebrates that enrich soils, the grassland ecosystems which feed livestock, and the mangroves, coral reefs and seagrass beds which provide essential habitats for aquatic animals (WWF, 2020). Whereas, biodiversity loss threatens our access to food both directly and indirectly. According to UN Environment (n.d.), in the past years, biodiversity loss resulted in disappearance of more than 90% crop varieties in farmlands and the half of the breeds of many domestic animals and depletion of world’s 17 main fishing grounds.

Biodiversity provides several health benefits to humans including nutrition, contributions to health research and traditional medicine, and prevention of spread of infectious diseases. The essence of biodiversity in ensuring food security and nutrition has already been stated. In addition, integration of nature-based solutions into agricultural production can also prevent utilization of certain synthetic chemicals (i.e. fertilizers and pesticides) which can pose serious health threats. Concerning medicines, approximately 60% of world’s population rely on traditional medicines derived from nature while 25% of modern medicines are derived from rainforest plants. Furthermore, medical science and biomedical research intensively use plants, animals, and microbes to understand and treat human diseases. Thus, biodiversity loss also impedes further medical research to address several diseases along with inhibiting people’s access to certain natural medicines. Finally, biodiversity plays a significant role in prevention of infectious diseases. The research study found that preservation of intact areas and minimizing exposure to wildlife animals lower the risk of the transmission of infectious diseases (Keesing et al., 2010). In addition, human disturbances to biodiversity also lead to certain alterations in natural world which might be a driver for patterns of infectious diseases (WHO, n.d.).

Global commitments for the protection of biodiversity

Biodiversity-related conventions: aim at implementing actions on multiple levels (i.e. international, regional, and national) through its developed complementary approaches and operational tools to reach shared goals of conservation and sustainable use of ecosystems. There are several conventions focusing on biodiversity (CBD, n.d. (a)):

20 Aichi Biodiversity Targets are under the umbrella of five strategic goals (CBD, n.d. (b)):

Based on the results of the reporting for 2020, none of the targets have been fully achieved while only six out of twenty targets have been partially fulfilled (Targets 9, 11, 16, 17, 19, and 20). In terms of elements within targets, while 11% (7 elements) have been achieved and 63% (38 elements) have certain progress, 21% (13 elements) moved away from the target or stayed the same. Finally, the remaining 2 elements could not be monitored due to absence of data. Generally, the results show that the set goals were not successful in terms of delivering planned outcomes over the period of 2011-2020.

The aspects of the biodiversity and ecosystems can be found across many sustainable development goals (SDGs) and associated targets. Whereas, there are two SDGs which are closely linked to the conservation of these two elements: SDG 14 (Life below water) and SDG 15 (Life on land).

The purpose of SDG 14 is “conservation and sustainable usage of the oceans, seas and marine resources for sustainable development”.

Very similar to Aichi Targets, SDGs on biodiversity also have very little progress (i.e. in some cases deterioration). Among the measured indicators, only SDG target 14.4 has experienced a substantial progress. Meanwhile, SDG target 15.5 on prevention of the extinction and threatened species had a negative trend due to the practices of illegal poaching and hunting in some countries resulting from lag national policies and legislation. Finally, it is also worth mentioning that among 22 targets in total (10 targets for SDG 14 and 12 targets for SDG 15), only the progress of four targets were measured which signal the problems of absence of data and insufficient progress reporting on a national level. This issue poses a great challenge for monitoring the progress of goals and consequently, prevents policymakers from designing better strategies.

It is also significant to highlight the interlinkages between biodiversity and different Sustainable Development Goals (SDGs). Based on the study by Blicharska et al. (2019), biodiversity is not only limited to SDG 14 and SDG 15 since it also directly supports the fulfillment of ten other SDGs and through these SDGs, contributes to the achievement of remaining five SDGs in an indirect way. In this regard, the hurdles in achieving SDGs 14 and 15 also pave a way to the creating of challenges in terms of achieving other SDGs which are directly and indirectly linked to biodiversity-related SDGs.

The recent reports depicting the biodiversity-related progress urge the countries and global community to take better actions by implementing the lessons learnt from the gaps and shortcomings of the Aichi Biodiversity Targets for 2011-2020. Biodiversity loss driven by primarily socio-economic factors does not only pose ecological threat, but also leads to certain social and economic problems including negative impact on livelihood, food security, health, and economic development. One of the existing challenges to ensure conservation of biodiversity and ecosystems is the fragmented approach to ecological problems while designing a policy strategy. In this regard, biodiversity-related problems are treated as a stand-alone issue and are not considered during and incorporated into the policy formulation process in other policy areas. Consequently, undermining biodiversity-related aspects results in undesirable consequences in a long run because of a systemic feedback mechanism. Therefore, considering interlinkages among biodiversity and sustainability pillars (i.e. ecological, economical, and social) is an important step in developing more sustainable policy frameworks.

In addition to the afore-mentioned aspect, the following recommendations can be made considering the existing hurdles in policy approach to biodiversity conservation:

Source: The article was published by Caspian Center for Energy and Environment (CCEE) as Policy Brief 43 (PDF)

Conservation International. (n.d.). Why Are Our Livelihoods Important?. Available at https://www.conservation.org/priorities/ livelihoods.