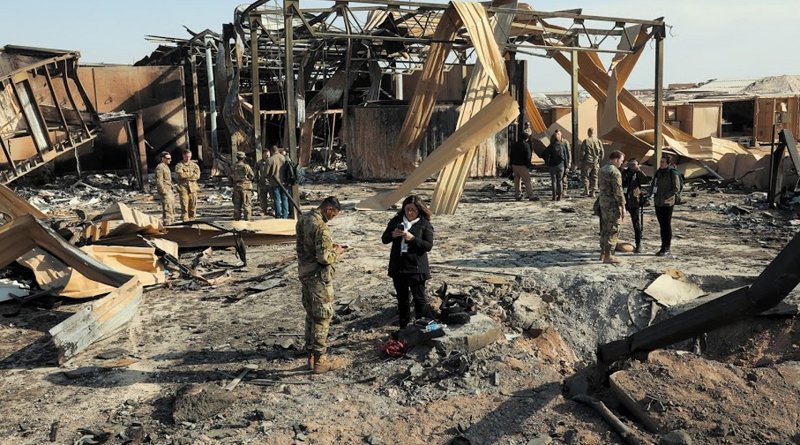 Reporters visit one of the many impact sites created by an Iranian missile attack at Al Asad Air Base, Iraq, Jan. 13, 2020. Multiple international news agencies were invited by military officials to view the damage from the attacks. Photo Credit: Army Spc. Derek Mustard

The number of US troops that suffered ‘mild traumatic brain injury’ in last month’s Iranian missile strikes has been updated to 109, of which 76 have already returned to duty, the US Department of Defense said.

Iran launched two volleys of ballistic missiles against two facilities in Iraq where US troops were based on January 7, retaliating for the drone assassination of General Qassem Soleimani in Baghdad a few days earlier. The Pentagon initially claimed no US or allied troops were injured in the strikes – but has since revised that assessment repeatedly.

On Monday, the DOD said the latest figure stood at 109 personnel with “mTBI,” of which 76 – or 70 percent – have already returned to duty. There were no additional details on the status of the remaining 33.

“This is a snapshot in time and numbers can change. We will continue to provide updates as they become available,” said a statement sent out by the Pentagon.

Iran claimed that the January 8 strikes killed over 80 US and allied troops. Meanwhile the US insisted there had been no injuries, even as a number of high-ranking officers accused Tehran of “shooting to kill.” US President Donald Trump declared that “all is well” and no lives were lost.

Washington subsequently doubled down on its troops staying in Iraq and dismissed the demands from lawmakers in Baghdad to leave the country. Many US operations have been suspended or curtailed in the aftermath of the strikes, the first time Iran had fired on Iraqi territory since the war between the two countries ended in 1988.

Soleimani’s assassination sent tensions between Washington and Tehran soaring and nearly kicked off another hot war in the Middle East. While US officials repeatedly said the commander was planning an attack on the American Embassy in Baghdad – with President Trump later expanding the alleged plot to 4 embassies – Iran insists Soleimani could have “very easily” targeted US commanders virtually anywhere in the region, yet chose to maintain “stability.”