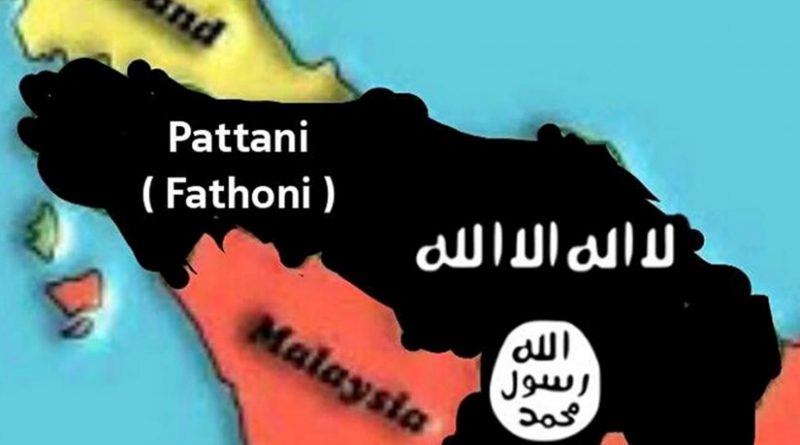 Recent online activity by Southern Thai radicals highlight the emergence of a new ISIL-inspired threat. While promoting autonomy for the Muslim majority provinces online radicalisation has the potential to become a precursor for real world violence.

The Southern Thai insurgency has been a thorn in the flesh for the Thai government for decades. Spikes in violence are not uncommon and the region has been constantly on high security alert. More recently in the last month, there has been a spike of a different kind. Thai Muslim separatists have rather precipitously become prominent on social media platforms such as Facebook. Numerous videos and messages propagating autonomy from Thailand are constantly being posted online and shared at an accelerated rate. The theme of these posts calls for “Fathoni Merdeka” or Freedom for Pattani.

A post in Facebook last weekend depicting the trademark black flag symbol of Islamic State of Iraq and the Levant’s (ISIL), also known as ISIS, superimposed on much of the Isthmus of Kra suggests that the militant group has found resonance with the online crowd there. (ISIL’s territorial claim of other parts of Southeast Asia had previously been pictorially portrayed in a similar fashion.) The marking of the said area as ‘Pattani’, omitting provinces like Yala and Narathiwat, has the effect of holding up the historical memory of the Muslim Sultanate of Pattani that existed before its eclipse by Siamese rule. Now, this dissolution of boundaries is consistent with ISIL’s ideological drive to reinstate Muslim territories to their pre-colonial past. Is this a stunt by the radicals to boost the waning morale of the fighters in the insurgency or has ISIL truly penetrated the region? Whatever may be the case, the post has, for the first time, raised the real possibility of ISIL’s hijacking the Southern Thai insurgency.

A self-proclaimed militant group aligned with the Barisan Revolusi Nasional (BRN), a formidable rebel movement, has also raised alarm by suggesting in a post that there may be a new group called the Bangsamelayu Nagarafathoni Merdeka (BNM). It is still unclear if this is a stand-alone group or one that is a faction of the more influential BRN or one that is inspired by ISIL. Influences from and links to the Runda Kumpulan Kechil (RKK), another separatist insurgent group based in the region, can be found in many posts as well.

The surge in online activity within the last month raises questions about the motivation and ability of the radicals in using the social media so effectively in such a short time. Groups such as the Pattani United Liberation Organisation (PULO), BRN and RKK, hardly claim responsibility for attacks in the region, let alone display militant credentials online. This common attribute of the groups operating in the region is not enough to imply that there is indeed a new rebel separatist group on the rise, but this aspect cannot be ignored.

The troubled southern Thai provinces of Pattani, Narathiwat, Yala and a part of Songkhla province have witnessed sporadic separatist violence throughout the decades leading up to 2001, when the conflicts escalated exponentially and gained a complexity that persists today. Pertinently, throughout the history of the conflict, separatist propaganda remained within the realm of the real world and very rarely reared its ugly head in the virtual world. But this trend is rapidly changing.

The cyber domain is an increasingly popular platform, prompting these Thai radicals to also make its presence felt online. Yet, this is not coincidental. Hitherto, Southern Thai radicals have lagged the curve insofar as it concerns propaganda on social media platforms. By and large, online presence had been centred on personal achievements rather than propaganda. The spike in online activity can be attributed to the Thai Civil Court’s ruling to confiscate the land which the Jihad Wittaya occupied in December of 2015.

Jihad Wittaya, an Islamic religious school, was forced to shut down in May of 2005 by the Thai Government. After an 11-year court battle, the school lost the title to the land it occupied in Talo-Kapo Village in the troubled region of Pattani, Southern Thailand. Individuals and civil society groups organised a fundraising event on 19 March 2016 to help the Waemanor family, who owned and operated the school, known locally as ‘Pondok Jihad’. The fundraiser collected 3.22 million Baht (S$125,000) and an undisclosed amount in Malaysian Ringgit, suggesting the participation of Malaysians.

Distrust between State and the South

The school was initially shut down based on suspicions that the premises were being used as a weapons training camp for separatist insurgents and as a front to launder money. The Thai Civil Court ruled to confiscate the land under the 1999 Anti-Money Laundering Act, and the occupants had to vacate the premises by March 2016. This spurred the radicals to organise the fundraiser so that the Waemanor family could purchase land elsewhere and re-establish the school.

Together with Facebook posts emphasising the need for Pattani to become a separate state, radicals are leveraging on the issue of the “Pondok Jihad” which has cultivated a deeper sense of distrust between the state and the Southern Thai people, in particular the separatists. The play on symbols and the tugging of heartstrings are also evident in these posts in a fashion that mimics ISIL’s use of social media. Furthermore, posts are providing pictorial evidence of what seems like insurgents training in bomb-making methods and weapons handling.

Social media has proven to be an extremely powerful communication tool and has been used effectively by terrorists’ organisations for various purposes, in this case, promoting their cause. The southern Thai conflict thus far, has been localised and contained within the region, but with the increasing salience of the radicals on social media platforms, there is bound to be a surge in the number of international supporters and sympathisers from outside the region.

*Vikram Rajakumar is a Senior Analyst at the International Centre for Political Violence and Terrorism Research (ICPVTR) at the S. Rajaratnam School of International Studies (RSIS), Nanyang Technological University, Singapore.

2 thoughts on “Insurgency In Southern Thailand: What Does ISIL’s Black Flag Of Pattani Portend? – Analysis”