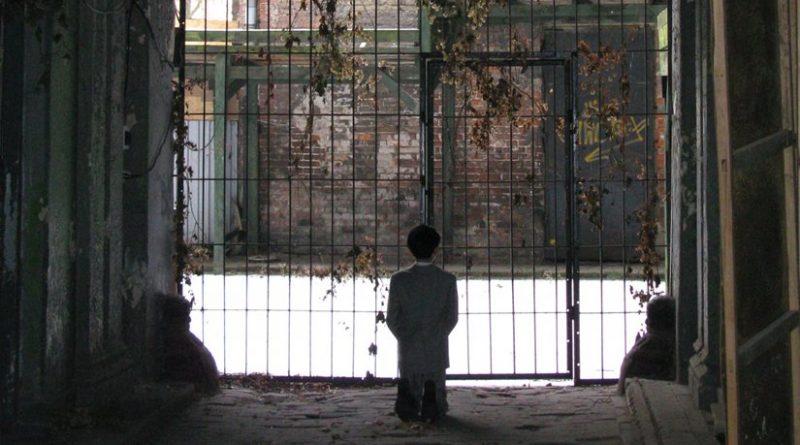 HIM, a statue by Maurizio Cattelan, depicting Hitler kneeling in prayer in a courtyard in the former Warsaw Ghetto. Photo by Maciej Szczepańczyk, Wikimedia Commons.

He’s back. Maurizio Cattelan, the nutty Italian artist who came out of retirement last year, is the subject of a docudrama by Maura Axelrod, “Be Right Back.” After working on this flick for over a decade—it is 95 minutes long—her film debuted last year at the Guggenheim, and now it is poised to open April 14 at the newly renovated Quad Cinema in Greenwich Village. The artistic community is ready to explode with joy, though normal people are not: they never heard of him.

The Catholic League knows who Cattelan is, having come upon his magnum opus, “The Ninth Hour,” in 2001; it depicts Pope John Paul II, now a saint, being crushed by a meteorite while clutching his crozier. Some genius actually paid $886,000 for this at Christie’s that year. In a news release I wrote on May 10, 2001, I referred to it as a “pile of junk.”

That was not very kind of me, but at least I didn’t hammer Cattelan for engaging in Catholic bashing. I said “it strikes us as being bizarre, but not necessarily anti-Catholic.” Others saw it differently. Norman Rosenthal, head of England’s Royal Academy, said “The Ninth Hour” convinced him that the pope was responsible for the spread of AIDS. Had he seen it a few months later, he would have blamed the pope for 9/11.

The trailer to “Be Right Back” features some interesting opinions on Cattelan. An art critic for Vogue said, “He once told me he hooked a cat with a priest in Milan. I asked him if he ate it and he said that he did but I don’t know if it’s true.” I believe him.

A critic for the Gallerist was taken by the scope of Cattelan’s work. “He’s just selling you an idea in a pretty raw form. It’s almost a miracle, this idea that you would be able to float a dead Pinocchio in the Guggenheim or nail a woman to the wall and that’s inappropriate to have the pope hit by a meteor or a squirrel commit suicide.” That’s a lot to digest.

The person who made that comment, Adam Lindemann, isn’t sure what to make of Cattelan. “I think he’s probably one of the greatest artists that we have today, but he could also be the worst.” He sounds confused. “It’s going to be one or the other.” That’s a safe bet. “It’s not going to fall in the middle.” Smart call.

Art critic Jerry Saltz is also up in the air about Cattelan. “Whether it’s crapola or transcendence, you’ll remember.” Especially if it’s crapola—that would mean you wasted your time and money. A critic for the New Yorker thinks Cattelan is a fraud: “He doesn’t make art. He makes tendentious tchotchkes.” Is it really fair to label them “tendentious”?

In 2011, the New York Times announced, “It may be time for him to quit.” Good thing Cattelan paid it no heed. Last year he installed a solid-gold toilet in a Guggenheim rest room. If he has another one left over, maybe he’ll gift the Catholic League (we have union labor in the building so unfortunately they won’t allow him to install it).

I will not be at the Quad to see “Be Right Back.” It opens on Good Friday, so I’ll be in church. But I might say a prayer for those who think Cattelan is “probably one of the greatest artists that we have today.” And if that were to come to pass, I would be impelled to say a novena for the entire artistic community.